Murder by the Book: The Crime That Shocked Dickens's London 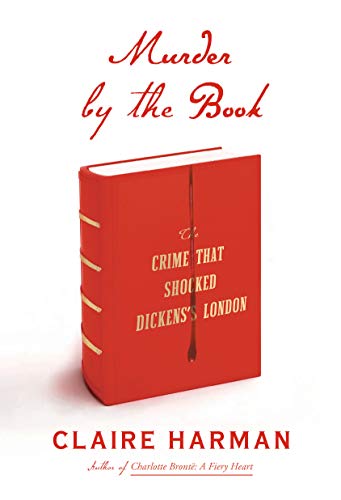 Claire Harman’s Murder by the Book begins in chaos and mystery: the body of 73-year-old aristocrat Lord William Russell is discovered in his own bed in his Mayfair mansion, his throat slashed to the point of near-decapitation.

Within minutes of the discovery of the corpse, the metropolitan police of C Division swarm the scene. They quickly see through clumsy attempts to make the murder seem the consequence of a botched robbery, suspect an inside job, and turn their suspicions upon Lord William’s recently-engaged Swiss valet, Benjamin Courvoisier. Within days they find more than enough evidence to arrest him. There is, in other words, not much of a whodunit to Harman’s story.

But wait: there’s more. What makes Murder by the Book truly compelling lies not in the mystery of who killed Lord William, but in the deeper mystery of why Courvoisier did it—and in the larger story of what more he did, in the unintended and wide-ranging consequences of his brutal act. The enigmatic in Murder by the Book gives way to illumination: the vivid portrait of a city and a nation at a troubled and transitional moment in its history.

It is May, 1840; in London, and throughout Britain, class-confusion abounds. A growing clamor by the working-class for a share in political power and particularly for the right to vote has swollen the ranks of the Chartist movement, and besides the regular demonstrations and the occasional riot, actual rebellion has broken out in Newport, Wales, six months before: 200 were arrested, and 21 convicted for high treason.

At the same time, growing working-class literacy has helped reshape popular culture, and in particular has fueled a literary craze unprecedented in its intensity: Jack Sheppard rules as the undisputed king of the wildly-popular new subgenre, the Newgate novel. Harrison Ainsworth, Jack Sheppard’s author, is at the peak of his popularity, and the world can’t get enough of his hero-thief: The novel has spawned innumerable imitations, and no fewer than nine adaptations of the novel have been playing in London theatres.

The sobering idea that some have expressed—that Jack Sheppard and the Newgate novel valorize criminals and romanticize low-life—has done little to dampen the enthusiasm.

And then Courvoisier strikes, and electrifies the metropolis and the nation as have few murderers before or since. As a real-life working-class criminal (and a foreigner to boot), his slaughter of an aristocrat becomes the perfect emblem of society’s burgeoning class and cultural fears.

Understanding why Courvoisier did what he did becomes a national obsession; when Courvoisier speaks, as he eventually does, the world listens. The problem is that once he begins to talk, he can’t stop, and his several confessions to the murder are highly contradictory.

Harman structures Murder by the Book with parallel accounts of the two great sensations of 1840, Courvoisier’s murder and Sheppardmania: largely separate stories until they inevitably merge when, with one of his several confessions, Courvoisier claims that reading Jack Sheppard has enticed him to committing the crime.

A powerful social explosion ensues, with hand-wringings and finger-pointings about the perils of bad fiction that make our own more recent tussles with the effects upon impressionable youth of rock and roll, television and video games pale by comparison. Serious consequences follow.

As it turns out, killing Lord William was only the first of Courvoisier’s transgressions: one could attribute to him as well the quick demise of the Newgate novel, and at least the attempted murder of Harrison Ainsworth’s career.

That’s the story that Harman gives us in full and vivid detail. But somewhat lost in her sensational mix is a fascinating episode in the history of police detection. Toward the end of the book, Harman notes that when the £400 offered for the capture of Lord William’s murderer is divided up, the police—as was common at the time—got the lion’s share. Of the three chief investigators, two were given £60. But one—Nicholas Pearce—got a hefty £100. Why the discrepancy? Harman wonders.

Harman does point out that Nicholas Pearce was the one who first discovered evidence leading to Courvoisier’s arrest. But there’s more to it than she realizes. Nicholas Pearce, as it happens, was not, like the others on the scene, a local officer; he was a ringer. In 1840, there was no detective branch of the Metropolitan Police: that would not come about for another two years. But London’s two Commissioners of Police had recognized the need for one, and had already begun to turn to Nicholas Pearce, a former member of the mythic Bow Street Runners, as their go-to man in high-profile cases.

The commissioners quickly, then, assigned Pearce to the case. And while other officers rambled about, and while some of them, with an apparent attempt to plant false evidence, nearly blew the case, Pearce kept his focus—and cracked it.

Not surprisingly, Pearce’s role in Murder by the Book is overshadowed by Harman’s fully fleshed-out accounts of Courvoisier and the Sheppard craze. But this embryonic stirring of Scotland Yard in the midst of this gripping case surely deserves our attention as well.