Murder at the Blueberry Festival (A Beacon Bakeshop Mystery) 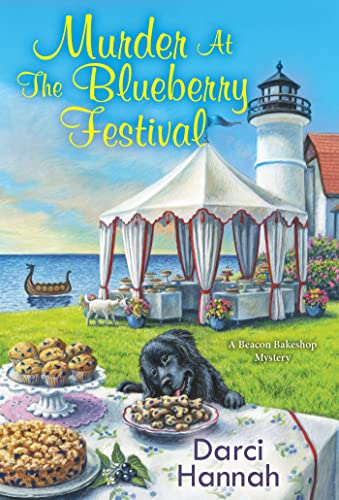 “If one can get around the two, three, and four paragraphs often written on how to prepare and make something . . . the story is a good one, and the premise holds water.”

Most cozy mysteries follow a set formula in their construction, and while Darci Hannah follows the basics in her new cozy, Murder at the Blueberry Festival, she has modified several parts, which makes for an interesting read.

Where most cozies have the female main character solving the crime either by herself or with the help of her closest friend or relative, Hannah has added a new feature: Lindsey Bakewell’s boyfriend Rory Campbell takes an active role in the investigation in addition to a cadre of other characters lending a hand.

Not a policeman, but an ex-marine, Rory brings strong intuition to his role. The chief police officer, Sergeant Stacy Murdock, investigates the crime in her own manner, and Hannah does not treat her as though she has no intellect. But in order for Lindsey to get some inside information, she relies on officer Tuck McAllister for aid in her investigation. Tuck happens to be the sweetheart of Lindsey’s best friend, Kennedy, so access to the police information is quite easy.

Hannah has set up an interesting premise: It’s time for the annual Blueberry Festival in the small Michigan community of Beacon Harbor on the shores of Lake Michigan. As the owner of Beacon Bakeshop, Lindsey has an important role in the community event—baking everything blueberry.

As the event progresses, the pranks begin. First, Betty Vanhoosen, the local realtor, finds her front yard amok with competitor realtors signs and the street in front of her home blocked, forcing traffic to pass through her circular drive to access the road. Second, a water balloon attack on the mayor’s float in the parade; and third, Rory’s 5K run is disrupted when the arrows on the street directing the runners are changed and everyone ends up at the edge of Lake Michigan rather than back at the starting point.

If that were not enough to upset the entire Blueberry Festival Planning Committee, the well-attended fashion show directed by Kennedy and Lindsey’s mother is invaded by a herd of goats. The finale occurs when Grayson Smythe, a local artist, displays his beautiful glass creation and it is destroyed in front of a full audience!

Of course, these pranks are the delight of the visitors, especially the children, but not so much to the committee. It quickly becomes apparent that the Planning Committee members have been targeted, but by whom?

Lindsey, whose Blueberry Pie Eating Contest is the final event, fears that she is the next to be targeted by the prankster(s), but that does not turn out to be true, causing everyone to take a second look at their assumptions.

As Lindsey and Rory take an evening walk along Lake Michigan’s shore, they encounter something much more disturbing than a prank: a dead body placed in the bottom of a replica of a Viking boat, dressed as a Viking, and accompanied by a goat.

Here is where Hannah’s humor shines . . . a goat afloat in a boat! The body is identified as Lars Jorgenson, a senior citizen in the community.

And Hannah presents another modification to the standard cozy formula. The victim is not someone who is generally disliked in the community, giving Lindsey lots of suspects to choose from. Instead, Lars, who was well liked and whose son, Anders, is one of Rory’s best friends, is certainly not a candidate for murder.

Hannah proceeds to run two mysteries—pranks and murder—side by side. Lindsey is sure the activities are related yet she has not figured out how. As the story progresses, more clues and red herrings are uncovered leading Lindsey to believe that Lars was responsible for the pranks and some disgruntled victim murdered Lars. Her thought process and investigation provide the reader with reason to agree.

Yet other suspects rise to the surface as Lindsey, Kennedy, and Rory learn that Lars was poisoned, and they discover a pie made with the poison ingredients in his house. The question becomes who had access to this particular poison, and the answer does not come easily.

Hannah continues to challenge the common cozy structure as more information comes forward making the reader question who the real murderer is. And even when the reader snaps their fingers, knowing the answer, it turns out that the answer snaps back.

Murder at the Blueberry Festival is a good cozy, with one big exception. Hannah has a tendency to explain things in excruciating detail. “My mom’s creamy Blueberry Delight fit the bill. It was not only delicious, but a cinch to make. I preheated the oven to 350 degrees and took out a nine-by-eleven-inch pan. Although I could have gone with a graham cracker crust, I decided to up the flavor and make a crust from store-bought Pecan Sandies instead. I put the whole pack in the food processor and ground them to a nice crumb. I then transferred the crumbs to a bowl and stirred in a third of a cup of melted butter. I then pressed the crumb mixture . . .” Well, you get the idea. And the explanation of making Blueberry Delight continues for two more paragraphs. It feels as if there is no end in sight. Hannah tends to do this throughout the entire story, and this distracts the reader to the point of skimming over material to get back to the crux of the story.

Having said that, it should be noted that if one can get around the two, three, and four paragraphs often written on how to prepare and make something, and throw in a ghost in the lighthouse and a goat afloat in a boat, the story is a good one, and the premise holds water.