Murder at Blackwater Bend (A Stella and Lyndy Mystery) 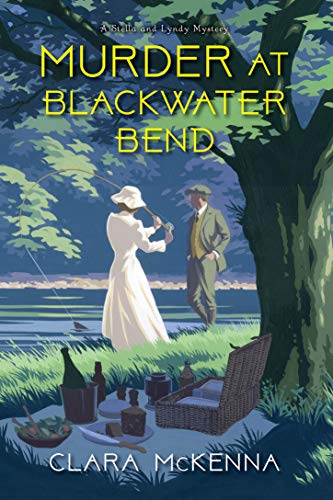 “Love will have its way and murder will out, but it’s a harrowing and dangerous experience for the Kentucky heiress and her noble intended, with plenty of false clues and mysterious diversions “

American heiress Stella Kendrick was none too happy to learn her father had arranged her marriage to a British viscount.

For that matter, the viscount—“Lyndy” to his friends—wasn’t particularly wild about getting married, especially to an American, even if she is an heiress.

That was before they happened upon a murder and helped solve it. Now Lyndy sees Stella in a different light.

Stella is also finding Lyndy to be the perfect man for her.

In between engagement parties, learning proper English etiquette, and making Lady Atherly, Lyndy’s mother, certain the betrothal is a definite mistake, the two have managed to run across another murder.

This one comes after the Cecil New Forest Pony Challenge, hosted by famous plant explorer, Cecil Barlow. The Challenge is won, as usual, by Lord Fairbrother, though it’s obvious another contestant has the better pony.

“He’s a cheat.” Disgruntled George Parley shook his fist, hurling insults and accusations. He shoved his way through the crowd. “There’ll be bloody hell to pay.”

Others also make accusations. Harvey Milkham the snakecatcher, accuses the noble of burning down his house, a place Harvey lived in thanks to an ancient land law.

The following day, as Lyndy is teaching Stella how to fly fish, she discovers something other than trout in the water.

“Stella clamored backward, water splashing in her eyes. Lyndy hauled her to her feet.

The noble hasn’t drowned however, but was stabbed.

Being a witness, Stella’s eager to help the police investigate, with Lyndy along for the ride. There are plenty of complications, however.

Because of his tirade against Fairbrother, Harvey Milkham is chief suspect but the knife used isn’t his. It’s a relic found by Stella at an archaeological dig a short distance from the crime scene.

Then Harvey is murdered, also, and though the police don’t connect the two deaths, Stella determines to clear the old man’s name because he was her friend.

Even Lyndy has a guilty air.

And he should, because before her marriage, young Viscount Lyndhurst courted Lady Fairbrother. Now that her husband is dead, his mother has decided Lyndy should jilt Stella and marry the unbereaved widow.

‘We have established that fact.’

‘As there are many fools about, I’m sure she will.’

‘Free to marry you.’

Lyndy leaped to his feet. ‘What?’”

Lyndy’s adamant he’ll do no such thing. He wants to marry Stella as much as she now wants to marry him. Both fathers agree, but his mother is determined to make it otherwise.

Love will have its way and murder will out, but it’s a harrowing and dangerous experience for the Kentucky heiress and her noble intended, with plenty of false clues and mysterious diversions before the murderer is discovered. Throw in an inquisitive lady reporter who’s got Stella’s father wrapped around her finger, and the mysterious Cecil Barlow with a secret of his own, and there are plenty of suspects.

So why do the police concentrate on the late Harvey Milkham?

Like the first Stella and Lyndy novel, Murder at Morrington Hall, Stella’s involvement in the case shocks and astounds the British nobility, especially Lyndy’s mother. Though willing to tolerate their differences in manners and social ways when seeking Stella’s fortune, once Lady Fairbrother is again available, Lady Atherly is very unsubtle in pointing out that the American heiress’ wild ways make her an unfit choice for a viscount’s bride.

The fact that Stella is so unladylike as to help to solve two murders in this novel, and one in the other, also does nothing to endear her to her future mother-in-law.

Though most of the other inhabitants of the area, from nobility to backstairs servants, are becoming accustomed to Stella’s “odd American behavior,” it’s very obvious that the two lovestruck youngsters are going to have a difficult time of it as far as the future mother-in-law is concerned.

In view of the freedom and outspokenness of today’s women, the reader may find the contrasting of British and American manners, and the ideas of a woman’s place in society, amusing, while their attitudes toward Americans both mercenary and close-minded.

Nevertheless, it’s Stella’s very “differentness” that makes this novel and the former one such a delight. She’s enchanted Lyndy and his father, and is certain to do the same to a good many readers, as well.