Murder in Belgravia: A Mayfair 100 Mystery 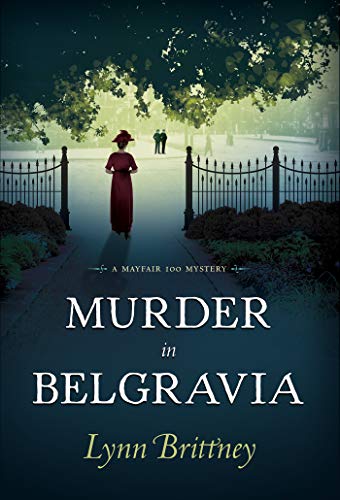 “Readers of Charles Todd’s Bess Crawford Mystery Series and Jacqueline Winspear’s Maisie Dobbs Series will enjoy this new series set against the backdrop of WW I in England.”

Set in London in 1915, Murder in Belgradia is the first Mayfair100 Mystery by British author Lynn Brittney. In this ambitious start to the series, a substantial group of characters are introduced.

Since WWI is raging the two younger men in the group have already been invalided out of the fighting, while the older man is a retired detective recalled by Scotland Yard due to the lack of available men. The premise of the series is that women are needed to investigate some types of crimes despite the solid prejudices against them. The Commissioner of Police says:

“’You can’t have a decade of women knocking the hats off policemen and worse, and then expect male officers to welcome them into the fold.’”

The suffragettes of the past years left a bad taste in the mouths of the police. Nonetheless, young Chief Inspector Beech quietly puts together a task force that includes a woman doctor and a war widow who has studied law without hope of practicing. They accumulate some other colorful characters in a mix of upper and lower classes to investigate the death of an aristocrat whose lady wife claims to have killed him.

The crime is eventually solved by investigation into the unsavory habits of the dead man, but the most engaging parts of the story are the vivid historical details of life in London during that war. There is a scene with a Zeppelin hovering as it drops bombs, that makes you realize London was bombed long before the famous Blitz of WW II. There are other scenes with two distinctly different female volunteer organizations attempting to help the police, that are intriguing. And there are many more details of the period that are fascinating.

There is also a strong picture developed of the lower-class members of the task force including the older detective who is a widow with three impetuous daughters at home, and the young constable who is brawny despite his war wound and who is useful when they need to interview servants in the kitchen.

The upper-class characters are less fully drawn. Chief Inspector Beech is from the upper-class and has chosen an unusual profession, like many a detective from British mystery series before him. He hides an unrequired love for the war widow, while the doctor hides her feelings for Beech. The triangle is sketched briefly but no doubt will be developed in future installments of the series.

The end result of the story is solution of the first murder and establishment of the group that will be able to solve more crimes in the future. The author has chosen the time well to portray young women who are just breaking out of the boundaries set in the Victorian and earlier eras. It is good to see sympathetic male characters in the book as well. The author mentions the experiences of her own grandparents as inspiration for the books and the period details are especially entertaining.

The book was originally released in the U.K. where the author has published plays and a series of young adult novels. Readers of Charles Todd’s Bess Crawford Mystery Series and Jacqueline Winspear’s Maisie Dobbs Series will enjoy this new series set against the backdrop of WW I in England.