Murder at the 42nd Street Library: A Mystery 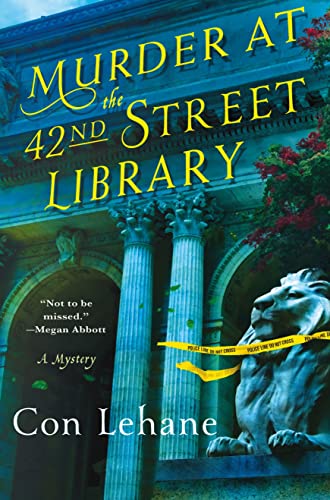 In the first book of a new series Con Lehane combines revenge, child abuse, and dysfunctional relationships with murder in an amateur sleuth mystery that is both more realistic and more suspenseful than the majority in that sub-genre.

Unless one has been living as a hermit in some dark cave, the New York Public Library at 42nd Street, or at least its façade, is familiar. With its twin stone lions guarding a massive front door, the library holds the Special Collections in the fields of the humanities and social sciences. Whether a tourist, scholar, researcher, or one of its busy professional librarians, the building is an icon of knowledge painfully acquired through the past several centuries. It is the modern day equivalent of the famous library of antiquity at Alexandria.

It is the last place one would expect a murder.

When someone shoots Dr. James Donnelly, literary biographer, then fires two shots at Harry Larkin, Director of the Special Collections Division, who dives under his desk to escape being the next victim, the sanctity of the library is violated. The shock reverberates throughout the library much as a minor earthquake might. Who would want to murder an elderly literary biographer and why?

In the split second before the bullets kill him, while his brain still functions, Dr. Donnelly knows the answer to both questions. “At that moment, he recognized the face that was inches from his, felt cold, hard, steel pressing against his neck, and knew he was about to die and why.”

NYPD Homicide Detective Mike Cosgrove questions a shaken Harry Larkin about the murder, but the former Jesuit priest and scholar of medieval history denies either recognizing the murderer or having any idea of what the motive might be. Despite the fact that the murderer pushed through a group of tourists, ran through the second floor, down the stairs, and out a side door, neither staff nor the tourists are able to provide a useful description.

Ray Ambler, middle-aged, reserved and with rather old-fashioned manners, finds Harry Larkin’s statement puzzling. As Curator of the Crime Fiction Collection, Ambler admits to an interest in murder that belies his self-professed pacifism. He is curious as to how one could be the target of a murderer, have time enough to duck behind a desk, yet see nothing. Even more puzzling is Kay Donnelly, the biographer’s ex-wife and a reader working the Nelson Yates mystery collection, who claims to have no idea why James Donnelly was the target of a murderer.

Detective Cosgrove is aware of Ray’s propensity to snoop into murder investigations from previous cases, and warns him against interfering in an official police investigation. “You got lucky a couple of times and helped. You as easily could’ve gotten yourself or someone else dead, not to mention contaminating evidence, tipping off suspects, or finding other ways to fuck up an investigation.”

Still, Detective Cosgrove asks Ray to tell him everything he learns from talking to the staff, particularly Harry Larkin and Kay Donnelly, as well as Maximilian Wagner, a self-professed literary biographer with a reputation as a muckraker. Both Wagner and Donnelly were working on a biography of Nelson Yates, whose papers were in the Crime Fiction Collection.

Then there was Nelson Yates himself, the greatest mystery writer of his generation, in Ray’s opinion. The writer is suffering from Alzheimer’s, but still cogent enough to claim he didn’t want either Wagner or Donnelly as his biographer, and that his papers were donated to the library by his wife without his permission. “What did the shooting have to do with the Yates collection?” Ray asks Larkin, who avoids a definitive answer.

With Adele Morgan, another librarian on staff as his Girl Friday, Ray delves into the lives of Donnelly, his ex-wife, Kay, Maximilian Wagner, and Nelson Yates. The two amateur sleuths discover that all their suspects were at the same college together. So was Harry Larkin.

Another mystery that may or may not have any bearing on the murder is the disappearance of Nelson Yates’s daughter, Emily, She has not been seen for years, and Adele Morgan computer skills as a researcher fails to turn up any trace of her.

As Adele and Ray draw closer to a possible answer as to why Donnelly was a target, they find themselves in danger of becoming the murderer’s next victims.

Con Lehane has written a truly wonderful mystery, avoiding the totally unrealistic amateur sleuths that usually clutter the pages of this sub-genre. Ray Ambler is totally believable, both as a librarian and a sleuth. Although his questioning of suspects may be a little far-fetched, it is still within possibility, since he shares his knowledge with Cosgrove. At least, he shares most of what he learns. If he judges that his information is irrelevant to the investigation, he holds it back. Although that is a judgement he should not make, and a case could be made that he is guilty of obstruction, mystery fans will forgive him. After all, Mr. Lehane provides a fine story, strong and believable characters, and a wonderful setting. One can almost smell the old books, and see the lamplight glinting off the long oaken tables in the reading rooms. Anyone who loves mysteries and libraries will find Murder at the 42nd Library as satisfying as a cold beer on a hot day.