Innocence: Or, Murder on Steep Street 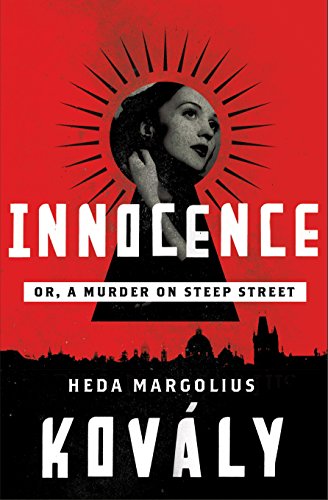 “All things truly wicked start from an innocence.”  —Ernest Hemingway, A Moveable Feast

Innocence: Or, Murder on Steep Street is the only novel by Holocaust survivor and memoirist Heda Margolius Kovály. In Innocence, Kovály presents a smart, challenging novel in a unique voice. It’s definitely worth the challenge, offering gripping suspense, gasp-inducing twists and turns, and a deep and authentic look into the human mind.

What makes Innocence challenging? One thing is the shifting narrative point of view. Helena Nováková, the main character, is a likeable woman living a bleak, lonely existence in Soviet-dominated Czechoslovakia in the 1950s, a place where your best friend or lover might be a government informer out to get you. The author begins Part I of the story with first-person narration, intense and almost hyper-real, from deep within the thoughts and feelings of Helena.

Soon, however, the narration moves to third person and follows other characters. The point of view continues to change (sometimes even Helena’s story is told in third person), and the reader has to keep track of who is at center stage and what exactly is happening. This intense focus will likely pull the reader even more deeply into the character’s lives, dilemmas, and mysteries.

Nor does Kovály make it easy to follow these characters, who have names like Koloušek and Kouřimská, names that will not easily slot into the memories of American readers, especially when a character disappears from the narrative, only to return many pages later.

The author also refers to characters by different names at different times. One character, a government informer, is referred to only by her last name. Later, there is a character named Karla, who is a pedophile. Only slowly will the reader come to the “Aha!” realization that Karla the pedophile, is also the informant.

All these complexities serve a purpose. Figuring out who’s who and what’s what goes hand-in-hand with piecing together the novel’s mysteries, which are deliciously surprising and shocking at every turn.

For example, Helena Nováková is an intelligent woman working as an usher at a cinema. Her beloved husband Karel is in prison for espionage. In a situation worthy of Franz Kafka, Karel had drawn a map for someone to visit their cottage in the woods. That map, by pure chance, led past a secret government munitions plant, leading to Karel’s conviction and imprisonment.

Helena herself thus came under suspicion and was fired from her job at a publishing company. Her friends began to steer clear of her to avoid suspicion. She got a job as an usher at the Horizon cinema, where the government planted informers to watch her, sure that she must be guilty of something. “There’s no such thing as an innocent person,” says one detective obsessively out to get her.

Novaly skillfully communicates Helena’s consciousness to the reader: She is lonely, confused, thinking one moment that being alone is a great freedom and the next moment that it’s the ultimate misery. She’s not sure what to do to relieve her loneliness or to help Karel. Should she sleep with the government agent who could help Karel? Is that being unfaithful, she wonders, or is it simply what she must do? She’s emotionally torn as she tries to rationalize questionable behavior.

Through Helena and the other characters, Innocence tells a tale of self-deception, confusion, free will vs. fatalism. It’s a tale of betrayal and how ill considered actions that seem innocent can lead to horrifying evils.

About halfway through the book as Part II begins, the reader may wonder, “What about the murder on Steep Street?” or even, “Where’s the murder mystery?” There had been a horrible murder early in the book, but it was solved quickly and fell into the background. Then suddenly the story’s central murder does happen, right on Steep Street, around the corner from the Horizon Cinema. And it’s definitely a surprise to eventually learn who the victim is. Among the suspects, of course, are all the employees of the Horizon.

Then a strange change occurs in the novel’s structure and focus. Helena is no longer the central character even though (mild spoiler alert) she was not the murder victim. She becomes simply a background character, and her first-person narrations end.

The story shifts its focus to an entirely new character: a detective named Vendyš. The Introduction explained that the mystery novels of Raymond Chandler heavily influenced Kovály’s writing. Vendyš does show some similarities to Chandler’s detective, Philip Marlowe. While not a wisecracking misfit, Vendyš is an honest but flawed man in the midst of corruption. Since he’s the only police official in the story not investigating (or fabricating) political crimes, Vendyš is simply looking for the truth of who committed the murder.

At this point, Kovály’s skill as a mystery writer shines, as she uses suspense, hints, and suggestions to literally play with the reader’s mind, turning this part of the story into an irresistible page-turner with numerous prime suspects to the crime, each one in turn seeming definitely guilty.

Kovály also takes one chase scene to the edge of a dramatic climax, only to jump to another scene, leaving the reader desperately wondering what has happened—which is soon revealed indirectly in a conversation between two other characters. And when the murder is discovered, she goes for pages without revealing the victim—until the police notify the next of kin in the following chapter. All these techniques work excellently to keep the reader on edge until the surprising truths are revealed.

Then Kovály wraps up the mystery in a way that some readers—especially mystery fans—might not like. In a final section, two unknown characters, identified only as “the fat man with glasses” (briefly mentioned only once before) and “the fatter man,” explain to each other (and to the reader) who the killer is and how all the elements of the story fit together. Perhaps, however, such an explanation is the only way to tie up such a rich and engaging story.

Innocence is an excellent novel for readers who are up for a challenging, intelligent, and complex story—one that paints a masterful picture of a bleak, Kafkaesque, and highly intriguing time, place, and cast of characters.