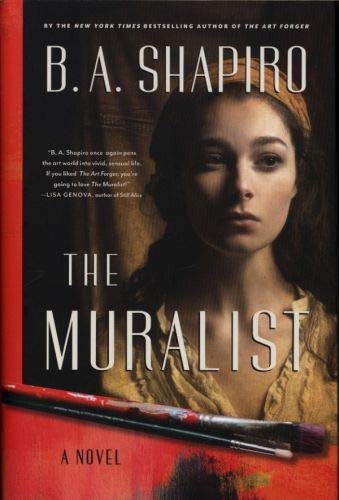 Bestselling novelist B. A. Shapiro clearly admires Abstract Expressionist art. Some of the most heartfelt passages in her newest mystery, The Muralist, are the descriptions of the paintings that lie at the center of the story and her explanation of what the artists are trying to achieve with their apparently inexplicable chaos of colors. Their work doesn’t merely copy “real” life.

As the title character, a young French-Jewish painter named Alizée Benoit, tells Eleanor Roosevelt: “It goes deep. Much deeper than just a picture of what we can already see. . . . We want to get at what life feels like.” (How does Eleanor Roosevelt get involved in this story? More on that later.)

So it is sadly ironic that when the novel leaves the easels of Alizée and her colleagues, it relies on an unbelievable set of contrivances that, too, are hard to connect with reality.

The bulk of the tale takes place in New York City in 1939 and 1940, when Alizée is working with “Jack” Pollock, Mark Rothko, Lee Krasner, and other not-yet-famous artists on paintings to be exhibited in government buildings as part of FDR’s Works Progress Administration. Although Alizée is fictional, the WPA art project is historically accurate, and it’s fun to see the future Abstract greats as playful, insecure, and often-drunk novices.

But unlike the rest of her coterie, Alizée has close Jewish relatives in Europe. As Hitler’s army tears across the continent, she grows increasingly frantic about rescuing them.

So far, so good; however, both Alizée and the plot soon strain credibility.

Not only is Alizée supposedly as talented as her brilliant pals, but she is also a pioneer who singlehandedly creates a new school in the Abstract Expressionist movement, in particular inspiring a dramatic shift in Rothko’s style. (Of course, Rothko is passionately in love with her.)

Then, during an official tour of the WPA studio, Alizée thrusts herself in front of Eleanor Roosevelt, who apparently has nothing better to do than to chat with this pushy unknown artist, visit her studio, and invite her to the Roosevelts’ country home (even while Franklin is running for an unprecedented third term and Hitler is conquering Europe).

Oh, and Alizée, through her artwork, convinces Eleanor to try to persuade FDR to save the desperate European Jewish refugees. In her spare time, Alizée also seduces the State Department bureaucrat who is holding up most of the refugee visas.

Still, Shapiro has built her award-winning reputation on a strong line of thrillers and whodunits. Despite the contrivances, she knows how to craft a page-turner.

Alizée abruptly disappears in December 1940. Some 75 years later, a few paintings show up at Christie’s auction house that may be unsigned early works of Pollock, Rothko, and others, but with second paintings hidden in their backings that look suspiciously similar in style to the two pieces of Alizée’s oeuvre in her family’s possession.

In alternating chapters, Alizée’s great-niece Danielle Abrams, a lapsed artist who now works at Christie’s, tries to unravel the dual mysteries of the new paintings’ provenance and her great-aunt’s disappearance.

The Muralist is certainly an engrossing tale. Perhaps it will also send a few readers to the Museum of Modern Art for a fresh look at the craft of Rothko, Pollock, and their contemporaries. That would be a wonderful, and very un-abstract, mingling of art and real life.