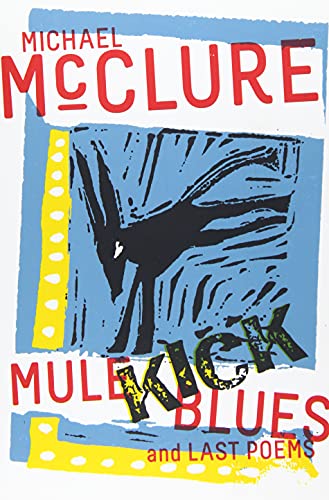 City Lights Books founding poet Lawrence Ferlinghetti and poet Michael McClure both died this past year, McClure at 87, Ferlinghetti was 104. They are both legendary figures of the halcyon days of The Beat era of the’50s and ’60s.

The poems McClure wrote in the final years of his life are in the just realized Mule Kick Blues. It is his own poetic epitaph to his remarkable career and a word sinfonia of his enduring themes and poetic craft.

In his moving introduction, City Lights Book editor Garrett Caples writes about McClure’s remarkable career and poetic artistry, and his friendship with the poet creating work in what he knew would be his final year. Caples examines his mystic aesthetics and the paradigms of his abstract expressionism and his imprimatur as an “action painter in words.”

McClure was one of the five poets at the fabled San Francisco Six Gallery reading in 1955, where Allen Ginsberg unleashed his Howl, the volcanic verse that gave voice to a rebel artists and musicians, disillusioned students, and iconoclast poets. McClure went on to become an Obie Award-winning playwright on Broadway and successful novelist. He appeared in films in the seventies, and he was immortalized in Jack Kerouac’s classic The Dharma Bums and most vividly portrayed as the character Pat McLear in Big Sur.

His poetry cycle Mortalities comprises the opening section of the book with a poet in winter riffing on his own mortality with as much wonder, energy, and literary style that has characterized his work all along. Everything is poetically immersed in the untamed natural world from an intellectually feral observer. With stoic passion, the verse is mystic, earthy, intimate, and entrancing as McClure wrestles with the concept of realms of ephemera in his life and the contemplation of infinite nothingness. But McClure’s style is never weighty or lamenting. He has vintage poetics at his fingertips with the curiosity of youthful adventure.

The concept of McClure, the biting anti-intellectual, anti-self-conscious writer dictates his style. His beliefs in such philosophical disciplines of Taoism, Zen Buddhism, kundalini yoga, and concepts of body and spirit not being separate entities—they are all invocations of his aesthetic, poetics that are distilled with minimalist imagery and radiant metaphor. The fragmented format of the poems, vertical line text, ellipses, and tonal rhythms are all style signatures that punctuate this collection.

The volume’s title section of Mule Kick Blues poems from previous collections is in homage to African American blues musicians. McClure channels composite portraits and dramatizations of great blues singers. Though, at this point, however inadvertently, it can strike some readers as appropriation of Black culture and language by a white poet. But it can be equally true that McClure’s poetic depictions are obviously created with complete sincerity and craft. So the reader can draw their own conclusion. The best of these is the cathartic lullaby “Forty Songs” with the opening image “I’m standing on the river of night with forty songs.”

In the final section of the book McClure’s poetic craft strikes loudest in such works as “Fragments of Narcissus” as he conjures the ghosts of Greek deities, his voice as thunderous as ever:

After he beat up the coupling snakes and blind, too. He told my Mama Liriope/I would have a long life    IF/ I never recognize myself. /May Papa Cephissus/wash that creaky bat/away/in the/River.

Mortality is beauty the beast spirit lives forever in figures of flesh sacred figures agglomerations of matter and bacteria/LORD BYRON DRUNK IN HIS COMEDY OF DIVINITY.”

These poems are testament of a literary mule who went not go gently into his good night without kicking up some poetic stardust along the way.