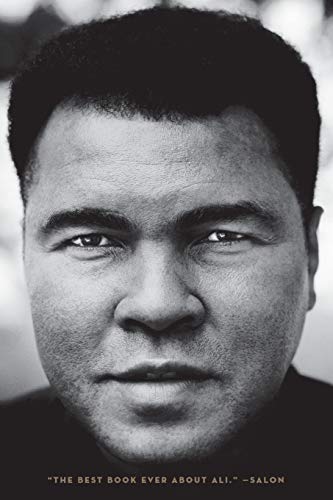 “Muhammad Ali . . . fashioned from the most contentious sport something perilously close to beauty.”

The heavyweight champion of the world, Gerald Early once wrote, was in effect the “emperor of masculinity.”

When that masculine throne was occupied by black men, the American zeitgeist usually got busy. Jack Johnson, champion in the early 20th century, became a one-man racial crisis, mocking white opponents inside the ring and bedding white women outside of it. The government ran him out of the country.

A quarter century later, Joe Louis inverted the Johnson image, betraying only humility in public and serving in the army in World War II. He became a mythic hero to blacks and earned the admiration of whites. Louis broke the ground in which Muhammad Ali would work, but Ali worked it with Johnson’s defiance.

Ali, too, became a racial pariah in America, at least for a time, first by changing his name from Cassius Clay and joining the Nation of Islam and then by refusing induction into the army for service in Vietnam. He lost his license to box for three-plus years and came within a Supreme Court decision of going to jail.

Along the way, he became a sixties martyr, an idol to American blacks and millions in the Third World, and the progenitor of the modern athlete: independent, self-promoting, steeped in ironic awareness of spectacle (if not of himself).

And when, after his boxing career was over, Ali developed Parkinson’s disease, he became tragic—at least to those who saw his fate as somehow avoidable.

Ali remains an iconic figure today. In 1996 he lit the Olympic flame in Atlanta, and in 1997 he starred in the Oscar-winning documentary When We Were Kings. That same year, Mr. Early published The Muhammad Ali Reader, a collection of notable writings on the self-styled “Greatest” boxer of all time. The book has just been reissued without any update of its contents.

Still, it’s quite a roster of Ali features grouped by decade from the 1960s through the 1990s. In 1962, A. J. Liebling writes up Cassius Clay’s 11th pro fight, in which he is knocked down for the first time; Tom Wolfe follows the young Clay around Manhattan in 1963 as he holds court with his bevy of young “foxes;” and George Plimpton spends time with Clay in Miami before and after his title-winning fight with Sonny Liston in 1964, while also finding time to have lunch with Malcolm X, then a Clay confidant.

The best and worst piece here is Norman Mailer’s Life essay “Ego,” which manages to make the 1971 fight between Ali and Joe Frazier seem even more dramatic than it was—but not before Mailer nearly vaporizes the reader with hyperbole.

He calls Ali “the swiftest embodiment of human intelligence we have had yet . . . the very spirit of the twentieth century . . . the prince of mass man and the media.” For good measure, he declares Ali “the first psychologist of the body.”

That’s a lot of freight for even Ali to carry, but Mailer isn’t wrong about Ali’s pugilistic brilliance: his unorthodox style flaunting almost every boxing fundamental joined with unmatched athletic gifts, creative intuition, and a bottomless will.

“Ego” becomes a blood-quickening examination of Ali’s career and his opponents. “Old fighters react to training like beautiful women to washing floors,” Mailer writes of Sonny Liston; Joe Frazier “was the human equivalent of a war machine.” Forty years on, Mailer’s distillation of the action in this first Ali-Frazier fight, the best in heavyweight history, is remarkably suspenseful.

Mr. Early’s introductory essay examines some Ali paradoxes—“Was Ali a star boxer or, through his genius, the utter undermining of boxing? Was he a militant or the complete unmasking of militancy?”

Another paradox involves the mismatch between Ali’s personality and the racial separatism he long espoused (but no longer does). Mr. Early notes how Ali genuinely liked whites, as he liked everyone. His good nature belied his often atrocious rhetoric, on full display in a 1975 Playboy interview in which, amid fulminations about America’s impending destruction, he allowed that black women should be killed for going with white men.

Yet Ali’s inner circle included whites, and his greatest personal offenses were perpetrated against blacks—opponents like Floyd Patterson, Ernie Terrell, and above all Joe Frazier, whose character was deformed by Ali’s racial abuse.

The Muhammad Ali Reader leans toward generally admiring portraits from the likes of Roger Kahn, Robert Lipsyte, Pete Hamill, and David Maraniss. It does include a fascinating 1977 essay by A. Bartlett Giamatti in which the future baseball commissioner dissects Ali’s racialization of his black opponents and a 1975 piece from Garry Wills, ahead of its time in recognizing that Ali had “nothing, really, to say, except with his fists.”

Mr. Early includes surprising defenses of Ali from Jackie Robinson and the embattled Patterson, and even a grudging tribute to Ali as emblem of the sixties by Jimmy Cannon—but Cannon was one of the fighter’s harshest critics, and the piece is hardly representative of his views.

Had the book’s reissue added writing from the 2000s, it could have included an excerpt from Mark Kram’s 2001 book, Ghosts of Manila, in which he punctured just about every Ali myth and was attacked for doing so. Kram is represented here in a 1989 article, “Great Men Die Twice.” He paints a somber but not unsympathetic portrait of Ali in his infirmity.

Ali’s illness has foreclosed the possibility of asking him serious questions. In this media rich age, a healthy Ali might have struggled to explain how it is that professional sports are so much more fair-minded and socially conscious than before he came along—but also more vulgar and less pleasurable to watch, in no small part because so many athletes now mimic his vain bluster. They usually come across as boorish or boring—as Ali could when his charm didn’t save him. That his legacy should include this crass carnival is another paradox of Muhammad Ali, who fashioned from the most contentious sport something perilously close to beauty.

Paul Beston is an associate editor of the Manhattan Institute’s City Journal.