Muhammad Ali: The Life of a Legend 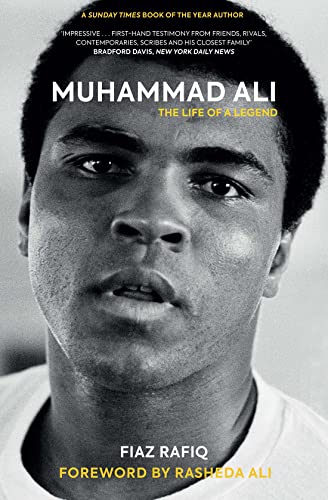 Fiaz Rafiq is an award-winning sports and entertainment writer, author of oral biographies of such celebrities as Bruce Lee and Arnold Schwarzenegger, and the soon to be released My Brother, Muhammad Ali: The Definitive Biography co-written with the champ’s brother, Rasheda Ali. As a preview, Rafiq has also released a volume of interview sessions he conducted with the champ’s family, friends, journalists, opponents, and celebrities.

Ali was the quintessential sports icon and media star who in his 20-year boxing career played into his image as a larger than life athlete who basked in the   spotlight, but was actually an intensely private man. Particularly poignant in the book are the interviews with three of Ali’s adult children, who remember him as a completely loving, emotionally supportive father.

From his early fame as a youth boxer in Louisville to his triumph winning gold at the 1960 Rome Olympics, and his dramatic bouts with Sonny Liston that made him the heavyweight champion of the world, he weathered the white American press and public turning on him over his refusal to be inducted into the military, which cost him his title and suspension from the ring at the height of his physical prowess.

Ali famously stated, “Why should they ask me to put on a uniform and go ten thousand miles from home and drop bombs and bullets on brown people in Vietnam while so-called Negro people in Louisville are treated like dogs and denied simple human rights?” Ali was becoming a leading voice in the ’60s black civil rights movement.

Ali’s embrace of Islam also ignited such a backlash by the white American public.   But Ali triumphed with his eventual return to the ring three years later as Americans by the millions also turned against the war. Ali’s advocacy for human rights around the world. His continued generosity and humanitarian work continued for the rest of his life, even as he battled Parkinson’s disease. Ali remained one of the most inspiring figures of the 20th century.

But the main focus of the book is Ali’s legendary boxing career. Rafiq digs into Ali’s technical prowess up close with interviews with his opponents—George Foreman, Larry Holmes, Chuck Wepner Richard Dunn—as well as younger champions like Sugar Ray Leonard and Evander Holyfield, giving the inside view unscripted recollections of Ali’s boxing style: the knockouts, the rope-a-dope strategies, and Ali’s mental tactics in the ring.

Heavyweight champion Larry Holmes was Ali’s sparring partner and eventually beat him in the ring. Holmes describes those fights as he verbally spars with Rafiq about the dramas that the sports press whips up, and it turns into a circular dialogue with Holmes repeating the phrase “I did what I had to do.” That reads like an old comedy sketch ala “Who’s on first?”

Former football star and actor Fred Williamson observed that Ali was “probably the only heavyweight that boxed like a lightweight. The guy was fast, quicker than you can see. His footwork shows you that he was a stage fighter, not just a big clumsy, lumbering heavyweight, which is what we have today.”

Rafiq’s interview sessions with sports journalists are also revelatory. Dave Kindred, who first wrote for the Louisville Courier-Journal and then was a sportswriter for the Washington Post, had particularly insightful anecdotes about covering Ali, who never remembered his name (he always called him “Louisville.”  Ali always giving him such complete access that one time Ali told him to join him in bed for an interview, in a room full of Ali’s entourage and other reporters.

Ultimately, there is not much new in this book, but that won’t matter to Ali’s legions of fans this many years after his death. But be warned, some of the interviews should have been edited. The Q & A text format can be heavy going, as with most verbatim transcriptions of conversations, and there are redundancies and bland observations.