Muhammad Ali: A Champion Is Born 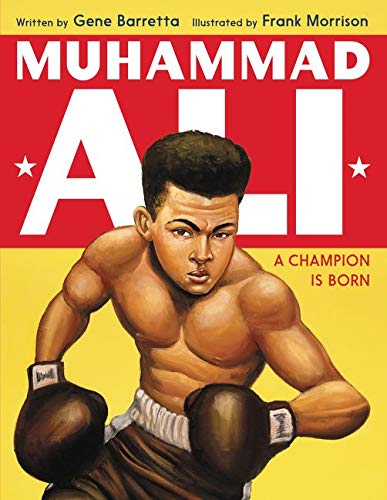 There is a new picture book by award-winning author and Sesame Street contributor and animator Gene Barretta called Muhammad Ali: A Champion Is Born, and it is lovely beyond words.

In the book, a rambunctious young boy named Cassius Clay is speeding through the rain on his brand new bicycle, trying to make it to the Home Show—an annual bazaar for the black merchants who were prohibited from attending white bazaars to sell their products.

While he and a friend browse the vendors’ booths and daydream about what they’ll buy one day, Cassius’ bicycle is stolen. Cassius is ready to fight, and says so to a policeman he approaches to report the crime. Instead of telling him to calm down or saying that fighting isn’t the way, the policeman, whose name is Officer Martin, tells him that “before you whup somebody, you better learn to fight.”

Officer Martin happens to be a boxing coach, and his statement changes Cassius’ entire life. He introduces Cassius to the gym, where the sweat, alcohol, and sound of boxing gloves thumping bodies and punching bags fire his imagination.

From that time on, Cassius practices day and night, using what is available to him as part of his regimen. For example, instead of actually riding his school bus, he tries to outrace it to increase his skill and endurance. And in order to be fast and quick, he employs his younger brother to hurl rocks at him as hard and fast as he can so Ali can learn to dodge them.

Readers who think they know everything there is to know about Muhammad Ali will love learning about his life before he became Ali. They will learn of his desire to buy his beloved mother a new house, his daydream of hearing his name being broadcast from the school intercom as the heavyweight champion of the world, and they will read how he gives in to the irresistible urge to “draw pictures of boxing robes with the words Cassius Clay, Heavy Weight Champion of the World” on them. After all, these are fantasies that people of all ages can all identify with.

Barretta’s style of writing is fast-paced, realistic, and touching on an elemental level. The fact that the book begins with a layout of the end of Ali’s major achievements (the defeat of Sonny Liston, the pounding of George Foreman, and the win against Leon Spinks—which won him the heavyweight  championship for the third time), and then flashes back to his early years gives the book a sort of cinematic feel.

Award-winning artist Frank Morrison handles the illustrations with dignity and flare. Working with what are called “dynamic acrylics,” Morrison captures the very essence of what made Cassius “Ali.” There is a picture of a young, boyishly thin Ali bobbing and weaving as he scowls at his opponent, and his long, skinny arms pounding away at the punching bags as he sharpens his skills. There is another illustration where Ali trains for boxing by trying to outrun his school bus, and another where he tweaks his reflexes by dodging rocks his baby brother throws at him. And of course one of the best illustrations is an intense Ali “floating like a butterfly and stinging like a bee” as he sends George Foreman flying backward during the 1974 Rumble in the Jungle.

This book can be used across a variety of settings, including discussions about American history, black history, or the boxing profession. It can also be used for inspiration in the teens sports arena—especially since one of Ali’s quotes is included at the end: “Don’t quit. Suffer now and live the rest of your life as a champion.”