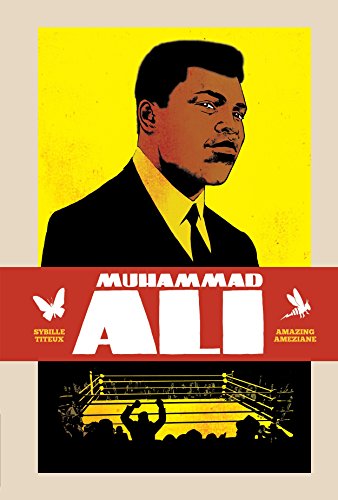 Author Sybille Titeux and Dark Horse Comics have teamed up to release a timely and sweeping graphic novel called Muhammad Ali that should literally blow fans of the boxing legend’s minds. It is the complete story (from birth to death) of the life and times of Ali, told in rich and moving illustrations that make readers feel they are right in the middle of the action.

The book opens with a nostalgic illustration of Ali’s parents’ humble Louisville, Kentucky, home, which was situated in one of three black ghettos slated for the black middle class. As the pages turn, readers see haunting illustrations of a young and quite miserable Ali with tears streaming down his face as he walks down a sweltering street with his mother and is denied even a tiny cup of water because of the color of his skin.

There are dark and shadowy illustrations of momentous events that unfold around young Ali, like the murder of 14-year-old Emmett Till, and there is even a graphic reenactment of the haunting song Strange Fruit by Billie Holiday. Though Ali may not have actually witnessed these events, they are included to show what everyday life was like for Ali and other African Americans who lived during the Jim Crow days.

Readers learn—and see through illustrations—that young Ali trained every day and never went out on dates; that he eventually became known as “King of the Streets” and won 161 of 167 boxing bouts by age 18. Readers are there when Ali earns the right to attend the Olympics, where he wins the Gold Medal in his sport. They glean curious tidbits about Ali’s life, like how he was so afraid to fly to Paris to his first Olympics that he wore a parachute in case the plane crashed.

They also experience firsthand Ali’s bitter disappointment when he discovers that even though he has won a gold medal, it does not make a bit of difference to a white restaurant owner, who refuses to serve him because he is black. Readers even share Ali bitter disappointment as he suddenly snatches off his beloved gold medal and tosses into the Ohio River.

Author Sybille Titeux has managed to stuff this spell-binding graphic novel with rich history and surprisingly meticulous details, including how boxer Sugar Ray Robinson refused to mentor Ali when he decided to turn pro; how Ali encountered the Nation of Islam and why he decided to join; and how he became a Civil Rights activist who was eventually beloved by the entire world.

The illustrations (by Amazing Ameziane) are a keepsake all their own, capturing facial expressions, frenzied crowds, and even sweat and blood droplets that spray through the air each time a boxer’s glove connects with a vulnerable jaw. There is a clever (and much appreciated) illustration of Ali’s boxing technique, and even a blow-by-blow illustration of Ali’s fight with Sonny Liston.

There are also meticulous details and illustrations about Ali’s latter years when he was diagnosed with Parkinson’s and experienced a steady decline in health. In fact, there are so many details that they cannot all be told in this review.

Problem areas: Despite the fact that this Dark Horse graphic novel seems destined to become a fan favorite, the book does have a few minor problems that must, in all fairness, be disclosed. First, the text is surprisingly tiny and may detract from the reader’s enjoyment, simply because the reader must resort to squinting or using a magnifying glass to see the words clearly.

Second, the pages are not numbered. This is not a deal-breaker; but it must be acknowledged that numbered pages are super-handy as a point of reference for readers (and book reviewers) when they are providing feedback about the story they’ve just read.

And last, the storyline unfolds in “real time,” meaning that it provides a blow-by-blow format that attempts to cover every aspect of Ali’s life and every single event, mindset, and social movement that was happening as his life unfolded. While this type of meticulous detail is a researcher’s or history lover’s dream, it can be exhausting for readers who just want Ali’s story and nothing more.

These quibbles aside, Muhammad Ali by Sybille Titeux is an excellent addition for upper elementary, middle school, and high school classes, and for lovers of American history, African American history, and boxing as a sport or pastime.