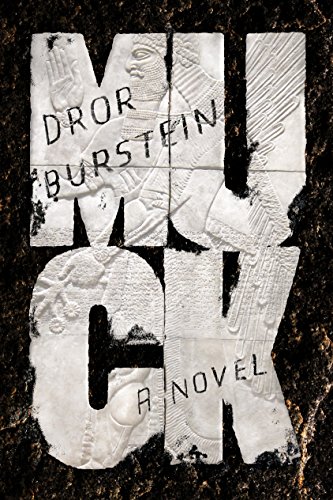 “readers will enjoy this funny, imaginative, and handsomely crafted novel first and foremost as a memorable work of literature, and as such it deserves to reach a wide audience.”

Can a contemporary work of fiction tastefully employ humor and satire to retell a biblical account of a national calamity? With 26 centuries of collective Jewish hindsight the Babylonian conquest of the Kingdom of Judah, the exile of its elites, and the destruction of Solomon’s Temple were but harbingers of subsequent catastrophes (which no one could anticipate at the time); without levity the source material’s gravity might sink a modern version.

Dror Burstein (Kin, reviewed in NYJB, and Netanya) balances humor and gravity perfectly in Muck—his retelling of the biblical book Jeremiah and the last two and a half chapters of Kings II with selected verses from Lamentations—by collapsing temporality and setting the late seventh and early sixth century BCE events and characters in 21st century CE contemporary and a fantastical future Jerusalem. HIs allegory is subtle enough to appeal to supporters of all positions on Israel’s political spectrum.

Like many postmodern fiction writers Burstein tends to prioritize language, style, and ideas at the expense of his narratives, which are more character than plot driven. Muck’s plot follows its biblical source, and that predetermined plot structure may make it more accessible than his previous novels in English translation to readers of mainstream fiction providing they are not put off by his handsome multi-page paragraphs and are willing to suspend disbelief and follow his speculative and magical realist reimagining. If the biblical text is the score of a Broadway musical, Burstein’s text is a modern jazz musician’s improvisatory interpretation that maintains the original chord structure.

Ezra Pound opined that all history is contemporaneous, but in Muck Burstein obliterates temporality. Burstein’s prophet Jeremiah is an ascetic bachelor poet who attends and performs at readings in literary bookstore cafes and whose favorite poetry book is Leisure by the 20th century Israeli poet Zelda. When we first meet him the literary critic Broch assaults his head with a computer keyboard.

In Burstein’s Jerusalem, its present day many neighborhoods outside the Old City, light rail, art academy, university and teaching hospital campuses, Cinematheque, Smadar movie theater, Clal Center, Hamashbir department store, and Teddy Kollek Soccer Stadium exist within commuting distance of the Temple Mount atop which Solomon’s Temple sits in place of the Dome of the Rock, a new Judahite royal palace has been built on the site of The Holy Land Hotel, a futuristic canal from the Mediterranean Sea has been dug inland through the Judaean Mountains to provide Jerusalem with a deep sea harbor, and the Kingdom of Judah pays its monetary tithe to the Babylonian Empire via electronic transfer.

Jerusalemites pursue idol worship both via physical figurines and by watching the television Idol Worship Channel, while children dealers sell kids in cages to Ammonite priests who sacrifice them to their god Moloch in Sultan’s Pool between the walls of the Old City and the Cinamateque.

When the Babylonian army invades and besieges the city it does so with tanks and helicopters as well as Iron Age catapults and chariots, and the commanding general arrives in a black Mercedes Benz. Jerusalem’s light rail extends all the way to Mesopotamia, and it transports the city’s elites into exile in Babylon.

At the wedding of one of Judah’s royal princes his mother-in-law addresses her husband Jacob with the Yiddish diminutive Yankele, and the officiant is a misogynist joke telling rabbi (another anachronism, since rabbis first appear in Jewish history in the Roman period). The joke the rabbi tells is “why is a woman’s period called a period? . . . Because mad-cow disease was already taken!”

The word Muck is a pretty good translation of the novel’s Hebrew title Tit, whose modern meaning is a building material sold in Israeli hardware stores but whose secondary and biblical meanings include clay, soil, earth, loam, and mud, which is synonymous with the Latin word humus, from which the English words humility and humiliate are derived. There is an interlingual pun between the Latin humus and the Hebrew and Arabic hummus, since in its first appearance the novel’s title word refers to the world’s largest bowl of hummus.

Judah’s King Jehoiakim installs an upside down astronomical observatory dome in Teddy Stadium and employs cement mixers to fill it with the chick pea dish, whose size status is confirmed by officials from The Guinness Book of World Records. The second place the one-word title appears in the novel is analogous to its only appearance in Jeremiah (38:6) where it refers to sewage or the contents of a latrine pit. In both instances a human being is humiliatingly immersed in the muck.

In both the novel and the Tanakh Jeremiah’s message to his fellow Judahites is for them to accept conquest and exile with humility. Far left-wing anti-nationalist readers might interpret Muck as an allegorical call for Jewish Israelis to accept with humility a one state solution that would render them a diaspora like minority in their own country. Such readers might also see Israel’s anti-Iranian tacit alliance with Egypt and Saudi Arabia as analogous to King Zedekiah’s catastrophic ant-Babylonian alliance with Pharaonic Egypt.

Israeli nationalists, on the other hand, might read Muck as a warning whose moral is that Israel’s military must remain the most powerful in the region, and modern Israel must never allow itself to become weak and dependent on the protection of more powerful perfidious neighbors as was the case for the kingdoms of Israel and Judah in the biblical First Temple period. (Of course, strength and humility are not mutually exclusive.)

But whatever their ideological outlook readers will enjoy this funny, imaginative, and handsomely crafted novel first and foremost as a memorable work of literature, and as such it deserves to reach a wide audience. Muck is especially recommended to readers who enjoy modernist and postmodern novels that reference the structure and themes of ancient texts, such as Joshua Cohen’s Book of Numbers (also reviewed in NYJB), and futuristic dystopian fantasies such as Gary Shteyngart’s Super Sad True Love Story and Rachel Heng’s Suicide Club. Like Kin and Netanya, Muck will whet its readers’ appetites for future translations of Burstein’s 11 other books of prose fiction, poetry, criticism, and children’s literature not yet available in English.