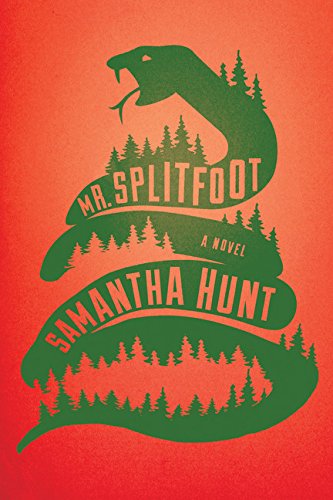 Mr. Splitfoot opens with a scene of two children trying to decipher what a mother does to care for her children. It becomes clear within paragraphs that both Ruth and Nat are struggling to answer the question; neither remembers a mother.

Love of Christ! Foster Home and Mission is not a place where either has ever felt love or compassion. Hard work, privation, and the looming threat of aging out of the foster care system drive Ruth and Nat to look toward their futures, and to fall into conspiracy with a con man. Though pretending to speak with spirits set them free, it eventually becomes a dangerous game.

A parallel narrative concerning Ruth’s niece, Cora, is interwoven with the story of Ruth’s youth. Years after Ruth and Nat leave the Love of Christ! Home, Ruth appears on Cora’s doorstep. Now mute, Ruth leads a pregnant Cora on an increasingly difficult walking journey across New York State. As they get closer to their unknown destination, Cora and Ruth encounter shifty cults, oracles, and ghosts from their pasts. The two stories merge as the women reach their destination and secrets are revealed.

Though billed as “a contemporary gothic, and subversive ghost story, a compelling mystery,” at the heart of Samantha Hunt’s newest novel lies the very human desire for comfort. It’s not surprising, then, that the formative persona of “comfort” is referenced often: mothers. On one level, Hunt’s novel is an examination of mothers and the base level influence they have upon their children’s lives. Ruth’s “idea of a mother is like a non-dead person’s idea of heaven. It must be great. It must be huge. It must be better than what she’s got now.”

Unfortunately, it doesn’t take much to be better than Ruth’s mother, a woman who threw bleach in Ruth’s infant face and left a permanent scar. The other children in the home come from similar tragedy, and each has an idealized view of “mother.” The comparison with the good example of Cora’s mother, Ruth’s older sister, is striking. Cora, too, is absorbed with what being a good mother for her growing infant will entail.

Though she could have successfully stuck with the motif of humans searching for mother-love, Hunt expands her examination and criticism to other sources of human comfort. Though the foster care system is obviously brought to task, Hunt turns a critical eye on religion as well.

Though Ruth and Nat live in a Fundamentalist Christian foster home, Hunt makes it clear early on that the children are mistreated, and they are taught negative and misleading things about faiths other than that espoused by their leader. “Ruth does love Jesus,” the reader is told, “the same way she loves Lincoln, Robin Hood, Martin Luther King, and Nat. Handsome men who fight for justice.”

In Cora and Ruth’s meandering journey, they meet disciples of cults and learn about the curious genesis of several offshoot Christian sects that arose in upstate New York in the 1800s. Religious belief is thereby relegated to the comfort of the weak minded or desperate, an eternal shell game run by con men of one stripe or another.

This is perhaps the man weakness of Hunt’s narrative. Though there is clearly a demographic that would agree wholeheartedly with such an assertation, Hunt’s identification of religion with the cult-like beginnings of a few, and scornful retellings of questionable tactics, particularly of the Mormons, reads as a personal attack and distracts from her story.

Regardless, Hunt’s use of language is lovely. Her sentences are clear and evocative: “Ruth slipped each child eighty dollars, like a visiting grandma paying them off, expunging her guilt only slightly, the oldest girl walking away from the littler ones, as if being born a girl makes her responsible for everyone alive.” Many women will identify with that description, if ruefully.

Her story structure is a marvel, as well, as she brings the narrative of Ruth’s youth toward the end of Cora’s journey and ties them together in a neat bow.

Mr. Splitfoot, the title, is a clear literary reference to the Christian devil. Samantha Hunt fascinates with an examination of who and what that might be: loss? Loneliness? Lies? Abandonment? She offers arguments for all of these, but leaves the reader to decide where true evil lies. At the denouement, though, a way to take away the fear of Mr. Splitfoot is clear: Love is the answer.