Mr. President: How and Why the Founders Created a Chief Executive 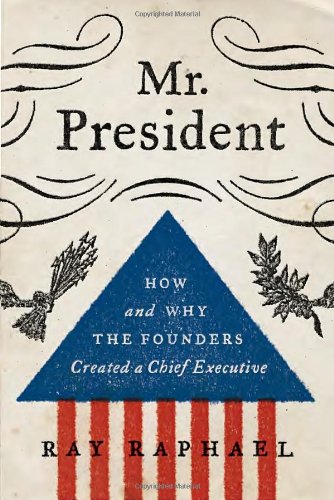 “Mr. Raphael keeps an extremely even keel, and if from the text the reader gains a suspicion that politicians back then were smarter than they are now, you can imagine him biting his lip really, really hard to keep personal opinion from leaking onto this page. Richly footnoted and indexed, this book is recommended for hardcore history buffs.”

Mr. President is a serious text that covers the part of American history addressing the idea of having a president. Ray Raphael provides the reader with an overview of America government starting pre-King George III, continuing through the Second Continental Congress, to the Constitutional Convention of 1787, through the presidency of George Washington and concluding with the election of John Adams.

The primary focus is on the Constitutional Convention of 1787. The important players include those familiar to us: George Washington, Benjamin Franklin, James Madison, Alexander Hamilton, John Hancock, and others who may be less so: James Wilson, George Mason, Robert Morris, and Rufus King.

State governors held the locus of power in colonial America and were initially appointed by commercial enterprise. Governors held military power over the civilian population and the authority to displace natives.

As the colonies evolved, governors’ power became more political and governorships were removed from shareholders’ authority to be commissioned by the king. Governors continued to exert combined executive, legislative, and judicial powers and received legal kickbacks from commercial transactions in the manner of fines, fees, and forfeitures. They appointed sheriffs and judges, could disband legislative assemblies and negate but not make law nor start new construction, nor impose martial law without consent of their legislature. Colonial legislative assemblies had some local power, such as raising money through taxes.

There were numerous struggles for power between local authorities and the governor leading up to the American Revolution. The unpopularity of the Townshend acts was so great as to lead to the arrest and recall of the governor of the Dominion of New England. In 1770 judicial control was moved outside of local control and rebels started going around state governors by using committees, typically local trade bodies.

Early Americans were more or less loyal Englishmen. Americans tended to separate the will of the king from his advisors when new taxes were levied. Their rallying cry, “No taxation without representation,” was not so much a call for rebellion as much as a call for home rule. Goodwill remained for the king by the majority of Americans up until 1775 when a speech by the king (who claimed that Americans wanted their own empire), called for suppression of what he believed to be a full-up rebellion.

The die was cast. The American Declaration of Independence can be seen as a personal attack on one man: King George III.

The First Continental Congress was held in Massachusetts in 1774, an outgrowth of local committees and conventions. The presiding officer was called the president, and at this point a “president” was simply someone who presided over a convention, congress or meeting. The word did not have the connotation that it has today.

The president’s role was as moderator or facilitator, not a leader. Peyton Randolph, a former attorney general was president of the First Continental Congress. The first executive act of the first provincial congress was to raise taxes to form an army.

The Second Continental Congress was formed in 1775 after the events at Lexington and Concord. For this convention John Hancock served as president. Its purpose was to form a formal interim government to get acceptance (i.e. aid) from France.

The first American government was without a constitution and was called a Confederation. The Articles of Confederation were ratified in 1781 and gave most power to the states. States added mechanisms to hold their own state executive office, the governor accountable by elections, adding term limits, removing authority to close legislatures, and removing the veto.

Some states, so hating their British governors removed the role or re-titled that office to president. The little national executive authority that there was was held in the national legislature. The national executive was specifically instructed not to take action on matters of consequence. The president could not raise money, or an army or navy.

The American government under the Articles of Confederation was not successful. The drawbacks (which are not discussed in detail) lead to having another Convention in 1787, meant to strengthen executive powers. George Washington served as president of this convention and when James Wilson initially proposes a new, unitary national executive, the proposal was not exactly supported but not opposed. What it meant was undefined.

Proposing an executive branch where there was none before raised a large number of issues, for example how is the executive to be elected, by the Senate or the people? The length of term? (Early options were three or seven years.) One term only? Authority over what? Veto power? Could a veto be overturned? What were to be the checks on executive power? How to remove a sitting president? For what reasons? Should the executive authority be unitary, three men, an executive council?

All these questions had to be worked out. The convention members wanted an independent executive but didn’t trust an independent executive. Benjamin Franklin pointed out, “The Executive will be always increasing here, as elsewhere, till it ends in monarchy.” But the best argument for having strong executive though was the ongoing inefficiency of the Confederation. Decisions on the structure of the presidency were made, unmade then made again.

Bizarrely, Alexander Hamilton made a speech that first attacks the Confederation but then proposing stripping the states of power. And instead of a presidency, he proposed a governor with the power of monarch with a term lasting for life. His speech was politely received but ignored. Actually, not just ignored, it incited a backlash with calls not to limit but to strengthen states’ powers. And Hamilton, feeling misunderstood left the convention early.

The convention employed the idea of separation of powers and checks and balances (espoused by “the celebrated Montesque”) across the branches of government. As there was fear of the rich enslaving the rest, one purpose of the executive would be to protect the people from legislative usurpations. There would also be checks and balances across within the legislature. The lower house would be democratic, the upper house aristocratic.

Eventually the structure of the presidency was agreed to be a unitary executive who could make appointments to offices not already provided for in the Constitution and hold veto over the legislature subject to override by 2/3 majority.

Not yet determined was how the president would be chosen or his length of term. The call for direct election failed by one vote (over fears of giving direct vote to the uneducated masses). Congress would elect the president but there was continued debate of appointment versus election.

At one point there was even consideration of selection by lottery but this was not supported. Rufus King is quoted as saying, “We ought to be governed by reason, not chance.”

How would the president be removed from office was open to debate. One simple way of thinking about impeachment was, was it necessary? If an executive misbehaved he would simply not be returned to office by electoral process. Ben Franklin, who as expected gets the best lines in American history, said that impeachment was “favorable to the Executive because without it, the clearest path to removal was assassination.

And in that sad event an Executive was not only deprived of his life but of the opportunity of vindicating his character.” Questions remained of what offenses called for impeachment, and who would conduct the trial. Alternatives to Congress were considered, including the Supreme Court and a special panel of judges.

At some point, the president’s length of term was set to a four-year term, re-electable without limits. A committee was then selected to smooth the prose. The smoothing lead to what we know as the Preamble to the Constitution.

After the 100 pages or so, the author dives into the details of the politicking at the Constitutional Convention and this reviewer’s eyes glaze over. Ray Raphael holds strictly to historical documents and minimizes conjecture and comparison to present day events.

This is admirable in an unbiased history but the writing style does not lead to easy reading, so reviewer skims ahead to find more interesting bits. Two of which are how the Electoral College and the office of the vice president came to be. Both are accidental rather than based on guiding principles.

A side effect of the Electoral College’s desire (for some obscure unexplained reason) to cast two ballots for president. Casting two ballots lead to the need for an appropriate position for the second man to fill. Having a vice president solved the problem of succession but what would the Veep do day-to-day? The vice president became the President of the Senate, who voted to break ties. (Begging the question: Were senate ties expected to be a regular occurrence?)

The back third or so of Mr. President focuses on the Constitution’s ratification and the practicalities of George Washington’s terms in office.

The completed Constitution had to be ratified by each state. There was immediate opposition (from pro-Confederation anti-Federalists) as well as many proposals for amendments. Virginia after ratification proposed 40 amendments. George Mason proposed ten amendments, known as the Bill of Rights.

George Washington didn’t have much to do his first months in office. There were no laws to execute until Congress had passed them, and he couldn’t appoint judges because Congress had not yet created any courts. The president spent much of his time establishing presidential protocol. One might say, though the author refrains from punditry, that the President was providentially setting precedent as president.

As George Washington ran unopposed (twice), the first election after his retirement is of some interest. The first proto-political parties formed almost immediately, the Federalists and the Republicans. And it was initially defined for the loser of a presidential election to become the vice president. So in the election between Adams and Jefferson, when Jefferson loses to become vice president, he immediately starts politicking against the winner, John Adams.

The epilogue of Mr. President is a mild and controversy avoiding comparison between then and now. Mr. Raphael keeps an extremely even keel, and if from the text the reader gains a suspicion that politicians back then were smarter than they are now, you can imagine him biting his lip really, really hard to keep personal opinion from leaking onto this page.

Richly footnoted and indexed, this book is recommended for hardcore history buffs.