Mr g: A Novel About the Creation (Vintage Contemporaries) 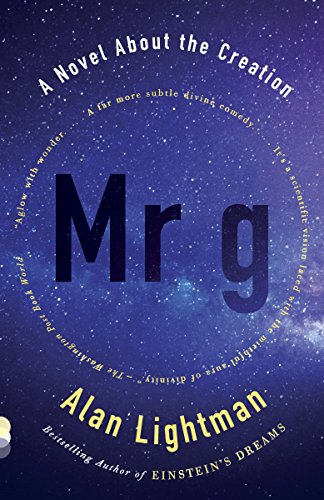 “The tale of Mr g is about the creation (and the end) of the universe. The eponymous Mr g is a god, not a solitary god nor even a Christian god but definitely an anthropomorphic one.”

Written as a children’s story using a grownup’s vocabulary, Alan Lightman has penned a beautiful and philosophical fable that weaves the laws of quantum physics into a modern Genesis myth that will stick with a reader long after the book is put away.

The tale of Mr g is about the creation (and the end) of the universe. The eponymous Mr g is a god, not a solitary god nor even a Christian god but definitely an anthropomorphic one. Mr g is an immortal who lives in the Void with his Aunt Penelope and Uncle Deva, co-immortals who bicker in a manner reminiscent of a G-rated version of the Greek gods on mount Olympus. As they bicker they also guide Mr g in his creation of the universe.

Mr g’s very first object constructed out of the Void is not light but time, and after time not matter but space. Next is mathematics, then vibrations and vibrations implications, frequency, color, and music. Mr g creates space not all at once, but dimension by dimension.

And when Mr g creates the universe, he creates not just one but many, each with a different set of cosmological constants, just to see what would happen. On advice of his Aunt and Uncle, instead of developing all the universes all together, he progresses just one universe. The one universe that holds his interest he names Aalam-104729. (Names chosen are explained in the back of the book.)

Even if the reader never learns whether Mr g created quantum physics or quantum physics created itself, one thing that reader can be sure of is the very first object of matter created by Mr g is a chair for Aunt Penelope to sit on in the Void.

With the creation of the universe, two mysterious and ill-boding entities appear in the Void. They are introduced as Belhor and his talking, somersaulting pet Baphomet, (a second smaller Baphomet appears later as the first Baphomet’s pet). Belhor is an immortal, too, outside of Mr g’s power to banish. Belhor knows much but speaks elliptically. (These daemons later visit an opera house on an inhabited planet in what can only be described as an amusing homage to Mikhail Bulgakov’s The Master and Margerita.)

The evolution of Aalam-104729 is organized by three specific principles: the first, symmetry; the second, no absolutes; and the third, causation. Initially Mr g hesitates but then offers up a fourth law of organization: harmony. With harmony though, Aalam-104729 self-destructs. But as it appears, no harm, no foul. Mr g simply picks another universe, also names it Aalam-104729, and starts over.

In Aalam-104729 Mr g (Is it Mr g or is it quantum physics?) creates matter out of energy, not just the usual particles, protons, photons, electrons, and neutrons but also the rarely mentioned silly sounding ones: photinos, winos, and zinos. Eventually there is so much matter that when Aunt Penelope picks up and shakes the universe, it rattles.

The quantification of time permits the quantification of space, and so Mr g begins to quantify space but according to his aunt and uncle, goes overboard. Uncle Deva points out that essential essence cannot be measured. Aunt Penelope agrees and adds that she wants a dress, a dress made of galaxies.

Time passes, and with it the second generation of stars are created out of the first generation’s passing, with rocky planets that rotate, planets having a day and night. Day and night varies a planet’s temperature, varies the density of its atmosphere, and with the density difference, creates wind.

During this, Belhor visits to Mr g to discuss matters of a philosophical nature, including the concept of free will, a discussion that occurs before there is life on any planet that could sustain the concept of free will. And though free will is inconsistent with physical law, Belhor points out that a universe without free will would be uninteresting. Belhor requests that Mr g should at least consider letting animate life believe it has free will. Various philosophical and moral discussions ensue without resolution. What is the difference between animate and inanimate matter? Will free will lead to good or harm? Is it possible for Mr g to predict the choices of free will as they occur?

On the planets plant and animate life forms. Consciousness evolves to the point that recognizes its own mortality. Conscious life creates religions and though all religions are anthropomorphic, none quite represent the entity that is Mr g. Mr g visits various planets (none are Earth, but all could be). Consciousness life recognizes the beauty of the universe but there is also great suffering. Mr g does not show himself, nor does he intervene. Mr g sees the beauty and the suffering, and reflects.

The creation of the universe changes its creators. Mr g does not come to terms with the contradictions of society, that that which is considered good for a society may not be good for its individuals. (Any reader whose interest is piqued by this contradiction as part of the human condition, this reviewer suggests Robert Pirsig’s second novel, Lila: An Inquiry into Morals).

In time, one planet’s animate life advances technologically and travels in space. On another planet, life evolves to where mind separates from corporeal body. On this planet brains reside not in glass jars but in reflecting spheres.

Throughout, the principal characters question the meaning of life and death, of mortality and immortality. They come to realize that not all in the universe is logical, not all is understandable, good and evil cannot easily be explained, that tood cannot be separated from evil, nor beauty from ugliness—that there are no absolutes. Everything is relative.

Time passes. Aunt Deva gets her dress made of galaxies. More time passes. The universe ages. Galaxies burn out. Aunt Deva’s dress fades. Animate matter becomes extinct. Mr g picks another universe (and the story begins anew). Though a moral is expected, none is provided, at least explicitly. This reviewer will hang his keyboard on one among many of Mr g’s self-reflections, that “Not all things can be contained.”