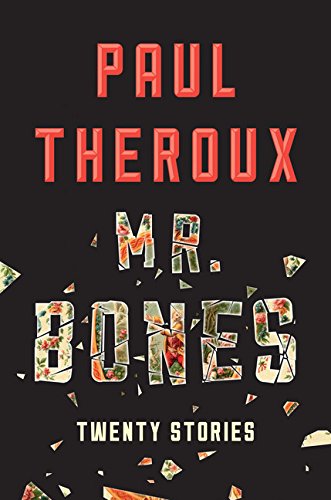 “All of the stories are unsettling and most conclude with a shock or, at the least, a disturbing revelation or observation. The 20 stories that comprise Mr. Bones are smart, well constructed, and clearly the creations of a veteran writer.”

The highly prolific, adroit writer Paul Theroux is at it again with an expansive collection of short stories, Mr. Bones. With a few exceptions, the stories in Mr. Bones are masterfully crafted, well written, and unnerving.

Theroux experiments with diverse type of narrative voices from third-person narrators to a wide variety of first-person storytellers including men, women, and kids.

The most effective and credible narrators are third-person used in the stories “Minor Watt” and “Siamese Nights” and the first-person male narrators of “Mrs. Everest” and “The First World.” Many of his most poignant and interesting stories are narrated by boys and often involve the relationship between the narrator and his father such as “Mr. Bones,” “Our Raccoon Year,” “Rip it Up,” “Action,” and “I’m the Meat, You’re the Knife.”

Mr. Bones begins and ends with a bang. The clever opening story, “Minor Watt” is a darkly humorous tale about a wealthy, sadistic art collector who derives pleasure and feels power by destroying his priceless, irreplaceable art works in front of others.

The narrator explains: “Destroying them meant that he was the equal of the person who made them—more than that, he was more powerful. He wiped these rare things from the face of the earth, leaving only a memory in which he mattered; and a memory was the more evocative, even mystical, for its vagueness. After centuries of use and veneration, of being handled and crated and resold, catalogued, photographed, admired, the small thin-rimmed jade bowl balanced on Minor Watt’s fingers, in his lovely kitchen, before the blinking eyes of the museum curator, was tipped into a blender. And before the man could react, Minor Watt clapped the lid on and poked the button labeled Liquefy.”

Minor Watt devises more and more outrageous and dramatic ways to destroy each piece of art. The story is sharp, well written, and concludes with a great twist, as do many of the best stories in this collection.

Some of the most unsettling and powerful stories in Mr. Bones are narrated by sons and directly or indirectly examine their relationships to their fathers. In the story “Mr. Bones,” a son reflects on a time during which his mild-mannered, seemingly “nice,” impenetrable father joins a minstrel show and becomes increasingly aggressive, and angry.

The story “Our Raccoon Year,” narrated by a boy named Henry, tells how his father becomes obsessed with eliminating the raccoons on his property after his wife leaves. The story opens with a telling description of his raccoon-like parents: “They were like hissing animals, blinded by the dark, thinking that no one knew. So we pretended we didn’t and hoped they’d stop. Then he’d say something, and she’d say something, and—Don’t say anything more, I thought, and held my breath—he’d say something sharp, and after a gasp and some crackling, their talk swished back and forth in furious whispers. Sometimes a thump, and a swelling silence that terrified Sam and me more than the hisses.” In both “Mr. Bones” and “Our Raccoon Year” the narrators also explore the relationship between the parents as well as the children.

The final story in the collection, “I’m the Meat, You’re the Knife,” is narrated by a grown man, now a writer, whose father has just died. The narrator, Jay, also discovers that a former teacher, who abused him, is on his deathbed. Jay decides to confront and torment his teacher and also realizes that his father was unwittingly complicit in his son’s abuse by his teacher. The story is brilliantly composed and quiet in tone, which makes its conclusion all the more shocking.

The two least effective stories in the collection, “Voices of Love” and “Long Story Short.” Both are collections of vignettes each narrated by a different person. Every individual narrative is short and undeveloped, seeming more like a sketch or an idea for a story than a tale in and of itself or part of a bigger picture. The different voices are barely distinguishable from one another and don’t feel credible. Many of the narratives in “Long Story Short” begin “I was born,” “I have,” “I was” or “I am” and lack the crisp, dynamic prose of most of Paul Theroux’s stories.

While, for the most part, the stories in Mr. Bones are not thematically cohesive, they maintain a consistency of style and tone. All of the stories are unsettling and most conclude with a shock or, at the least, a disturbing revelation or observation. The 20 stories that comprise Mr. Bones are smart, well constructed, and clearly the creations of a veteran writer.