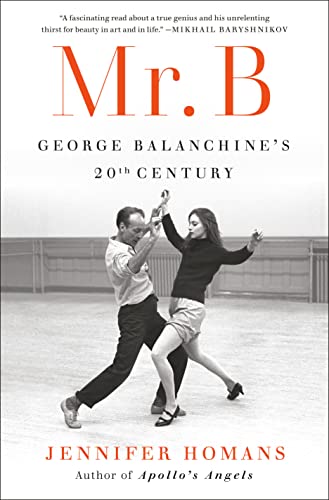 “a must for every lover of ballet and admirer of Balanchine’s work.”

According to Jennifer Homans’ masterful, comprehensive biography, George Balanchine had only one caveat about the person who would replace him at the helm of the New York City Ballet. The new head had to be a man who loved women, not a woman or a gay man. Ballet for Balanchine was about the spiritual and erotic love of women. Homan’s book shows how this idee fixe was both an artistic strength and a personal weakness. Although Homan tries to justify much of Balanchine’s behavior toward women, some of it now seems positively creepy as well as professionally unacceptable. Yet it was his obsession with women, particularly ballerinas, that led him to create the greatest ballets of the last century and one of the world’s greatest dance companies.

Georgi Balanchivadze’s life story begins in pre-revolutionary Russia. He was born in 1904, the son of a composer and arranger of Georgian folk music. Little is known about his mother’s background, except that she had won the state lottery. Thanks to this windfall, Georgi was born into wealth, but his father managed to lose most of the winnings in bad business ventures. When he was nine, Georgi’s mother sent him and his sister to audition for the school of the Maryinsky ballet. From that point on, Georgi’s life was ballet.

While beginning his career as a dancer and choreographer, he lived through the privations of World War I and the turmoil of the Russian Revolution. In 1924, he and some fellow dancers, including his first wife Tamara Geva, fled to Germany, then settled in Paris where Georgi went to work as a choreographer for the great impressario Serge Diaghilev’s Ballet Russes de Monte Carlo. Balanchine (Diaghilev gave him his new quasi-French last name), choreographed some of his major early work with the company. Diaghilev died in 1929 and the company went bankrupt. After participating in a short-lived attempt to revive the company, Balanchine met American millionaire Lincoln Kirstein, who brought the choreographer to America. With Kirstein’s fortune, Balanchine founded the School of American Ballet in 1933. That school later became the training ground for the New York City Ballet.

During his early years in America, Balanchine achieved success and financial security choreographing musical numbers for Broadway and Hollywood musicals, but his ultimate ambition was control of his own ballet company. In 1948, the City Center of Music and Drama offered Balanchine artistic directorship of the nascent New York City Ballet. Lincoln Kirstein worried about the practical matters. Most of Homans’ book is a chronicle of the work of that great company under Balanchine’s leadership. Balanchine built a great company: more important, he built an enormous repertoire of great ballets.

From 1947 on, Balanchine’s story is imbricated with the story of his New York City Ballet. His greatest work came from his association with that company which was devoted to showcasing his work. The company was also something of a cult with Balanchine as its guru. The dancers, his instruments, were devoting to pleasing him. Even choreographer Jerome Robbins, known for his ego and ambition, stood in awe of “Mr. B” when he served as co-director of the company.

For some ballerinas, pleasing Mr. B. involved dealing with his sexual attraction to them. Ballerinas were not only Balanchine’s muses, they were also objects of sexual conquest. Getting plum roles often meant sleeping with Balanchine or playing a complex game of cat and mouse. Homans details the career of Suzanne Farrell, one of the most gifted of the New York City Ballet ballerinas. Balanchine’s artistic and personal obsession with Farrell led to her getting many of the most important leading roles in his work, but her unwillingness to sleep with him led to his erratic behavior toward her and other dancers. When Farrell married another dancer in the company, Balanchine took away her leading roles and all of her husband’s roles. They had to leave the company. Farrell eventually begged her way back, but her husband remained persona non grata.

There were also Balanchine’s five wives, all dancers. The marriages were often turbulent or unhappy, but the ex-wives remained devoted friends. They saw the genius and the vulnerability. Homans also chronicles Balanchine’s relationship with Lincoln Kirstein, the eccentric, sometimes mad gay Jewish philanthropist who devoted most of his life to Balanchine’s work and the New York City Ballet. Kirstein was Balanchine’s champion, but the men were never personally close. If Balanchine worshipped anyone, it was composer Igor Stravinsky, whom he saw as collaborator and sometime father figure.

Homans does not present Balanchine’s complex relations with women merely out of prurient interest. Her thesis is that it was the choreographer’s adoration of women that inspired his work. Moreover, much of what we see in the abstract-seeming duets in Balanchine ballets is a working out of his relationships with particular women. We see these works now with dancers who never worked with Balanchine, who bring their own experiences to his work, but the work began with Balanchine and the women he adored.

We also see the works differently because the male dancer has become a more important part of ballet since the 1970s, when male stars like Rudolf Nureyev and Mikhail Baryshnikov (who was briefly a member of the New York City Ballet), became international celebrities. The experience of a Balanchine ballet now seems less exclusively focused on the ballerina.

Throughout the book, Homans writes the history of the inception of Balanchine’s most important works as well as detailed analysis of the ballets, from Balanchine’s first major works, Apollo and Serenade to his later work for the New York City Ballet. She has the gift of describing ballets without getting mired in technical language.

George Balanchine was always something of a mystic. Ballet to him was spiritual as well as physical. Homans’ thesis is built on Balanchine’s assertion that he was “a cloud in trousers.” Part earthly, masculine, part air. Ballet, he believed, allowed bodies to transcend themselves, to become not only beautiful, but spiritual.

The man was wildly impractical. For decades he received no salary from the New York City Ballet for his work running the company. His income came from royalty payments for his ballets. At the end of his life, he left no provision for his company to continue presenting his work. He gave the rights of his ballets to his heirs. He had no interest in his ballets surviving apart from him and the dancers for whom he created them.

Jennifer Homans’ Mr. B. is meticulously researched and carefully annotated. The massive bibliography and generous annotations can lead the interested reader toward further explorations of the great choreographer’s work. Homans’ writing carries the reader smoothly through its 600 pages of text. There are also many photographs. Of course, the most important documents of Balanchine’s work are the ballets themselves. This book is a must for every lover of ballet and admirer of Balanchine’s work.