The Jungle Books: The Mowgli Stories 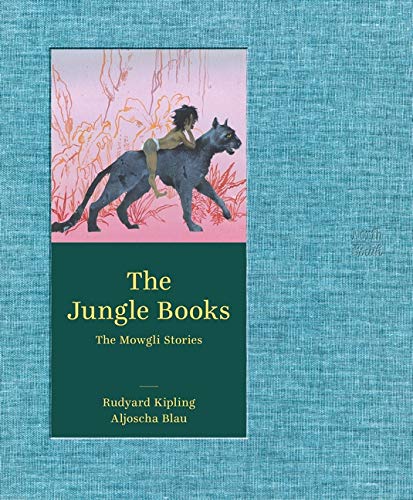 “The Mowgli stories are entertaining and well paced and likely to entrance a new generation of readers.”

This compilation of Rudyard Kipling’s classic tales about Mowgli, the young Indian lad raised by wolves, comes to the market in honor of Kipling’s 150th birthday. The book, beautifully illustrated by Aljoscha Blau, contains eight action-packed stories and numerous poems.

When just a babe, Mowgli makes a surprise appearance at the lair of a wolf pack, with Shere Khan, the tiger in hot pursuit, stalking him for supper. There is a hierarchy in Kipling’s animal kingdom. Wolves don’t like tigers, at least not this tiger. (Nor do they like monkeys. Perhaps because they’re too like humans.) The wolves deride the tiger as a “striped cattle-killer,” and the head wolf convinces the pack to spare the child and adopt him. Thus begins a years-long rivalry between Shere Khan and Mowgli, and an uneasy alliance between Mowgli and some of the wolves in the pack.

Nevertheless, Mowgli spends many happy years learning the ways and laws of the jungle and having grand adventures with his friends Hathi the elephant, Bagheera the panther, Baloo the brown bear, and Kaa the python. The boy acts foolishly at times and heroically at others, using his wiles and the strengths of his compadres to outwit both humans and animal-enemies of the wolves. While Mowgli doesn’t always listen to his adult animal advisors, he generally admits this mistake when his youthful enthusiasm and stubbornness land him in hot water.

One advantage to children’s stories that feature animals is that the animal characters can be grown-ups, and the stories will still appeal to children. What child doesn’t love a talking animal? Kipling’s embedded adult supervisors provide Mowgli, and these stories, with a moral center.

When the head wolf senses his time is near, he entreats the pack once again to spare Mowgli and allow him to return to his own kind. This return to the world of man doesn’t go well for Mowgli. The humans begrudgingly take him in, but have no clue what to do with this half-wild changeling. In the eyes of Kipling’s jungle dwellers, of which Mowgli counts himself a member, humans are careless, fearful, capricious, and greedy. In contrast, most of Kipling’s animals are motivated not by greed or revenge, but by the simple need for survival.

Not so, Mowgli, who is after all genetically human. When he eventually returns to the jungle, the cunning, vengeful youth essentially annihilates the entire village. He continues his vendetta against Shere Khan.

These stories involve trickery, revenge, battles, and enmity between species, much of which might be a bit above the head of some four year olds. But it seems certain that Kipling intended these stories to be read aloud. Kipling’s inclusion of explicit laws of the jungle, which the animals strictly adhere to (as opposed to the relatively lawless, nonsensical man) will provide good fodder for discussions about morality and ethical decision-making.

As the stories progress, Mowgli matures and the animals’ teachings produce a thoughtful and grateful young man, deemed by all as “Lord of the Jungle.” This moniker might merit a discussion as well.

Kipling’s tales withstand the test of time reasonably well. The Mowgli stories are entertaining and well paced and likely to entrance a new generation of readers.