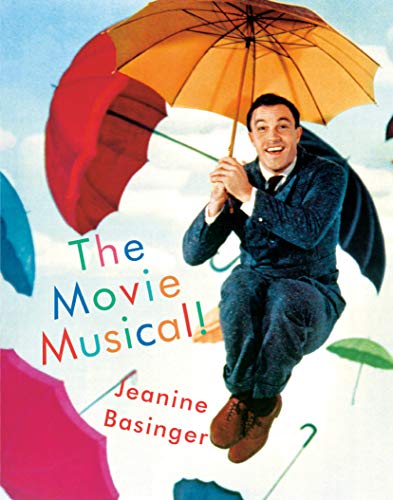 Jeanine Basinger’s The Movie Musical! is an in-depth history of a distinctly American art form that combined cinematic arts with music, dance, theater, and design. From every aesthetic angle Basinger examines what makes a genuine movie musical as opposed to a movie with music. And throughout the book are the career stories of the genre’s biggest stars: Fred Astaire, Ginger Rodgers, Judy Garland, Mickey Rooney, Ethel Waters, Gene Kelly, Lena Horne, Ann Miller, Lena Horne, Ethel Merman, Leslie Caron, Frank Sinatra, Barbra Streisand, Bing Crosby, Marilyn Monroe, just to mention a random few, along with the screen stars whose careers may be now forgotten but were once influential.

Basinger's first chapters correct the Hollywood myths about “talkies” suddenly shutting down the whole silent era in 1927 with Al Jolson’s musical megahit The Jazz Singer. There were many “silent films” that had sync sound elements—including dialogue—as studios experimented, but were far from perfected.

More sophistication came by way of Fred Astaire and Ginger Rogers, who brought song and dance artistry to a new artistic level in a string of films during the ’30s, especially when they were singing tunes by composers Cole Porter or George Gershwin. Basinger’s analysis of Astaire’s partnership with Rogers, who famously reminded the public that she did everything that Fred did, “backward and in heels,” is in depth and so much fun to revisit.

But the author covers a lot of new ground with equally interest to Astaire’s other screen partners including Eleanor Powell, Cyd Charisse, Leslie Caron, Rita Hayworth, and of course, his iconic return to the dance screen to partner with Judy Garland, as the dancing hobos who sing “We’re a Couple of Swells.”  Meanwhile, his contributions choreographically and cinematically ushered in a whole new era for the movie musical.

Garland, like Astaire, is, as Basinger acknowledges, in a category by herself in movie musical history, sealed in the collective American culture as Dorothy Gale in 1939’s The Wizard of Oz through her triumphant comeback in A Star Is Born in the 1950s.

For two decades, MGM became the premiere producer and innovator of the movie musical genre. Basinger’s chapter on the Arthur Freed “unit” at MGM is a who’s who of the best in the choreographers, songwriters, musicians, business designers, musicians, and technicians who were writing a whole new chapter of Hollywood history. Classics like Singin’ In the Rain, The Bandwagon, and Kiss Me Kate revitalized the genre in the years after WWII.

Other stars like Jeannette McDonald, Ann Miller, Rita Hayworth, Lana Turner, and Lucille Ball, were at the mercy of the studio system contracts, but Basinger details how a few, like Doris Day, was so talented and industry savvy that she refused to be “typed.”

There is ome overindulgence on certain stars, and there are glaring omissions on some key people working behind the scenes—Roger Edens, for instance, the musical arranger and vocal coach to many stars, including Garland.

One of the most interesting aspects of the book is Basinger’s analysis of the cultural backdrops of every era that made musicals inspire a nation in the darkest days of the Depression and WWII, to decades in which musicals were box-office poison, but continued to change with the culture.

Basinger touches on issues of racial stereotypes, but perhaps gives a more in-depth history about the treatment of minority performers and the destructive cultural impact of racially demeaning characters that was the norm in musicals for decades. Immensely gifted African American black musical stars such as Lena Horne, Ethel Waters, Paul Robeson, Dorothy Dandridge, Harry Belafonte, to name a few, faced racism at every level from Hollywood and still broke down barriers and built successful cinematic careers.

The dicey technical and artistic aspects of converting successful Broadway musicals into hit movies is rigorously detailed by Basinger. The Movie Musical is entertaining and on balance a comprehensive study. For musical film buffs this book is a trove of details about screen adaptations of big Broadway musicals. The short list includes Oklahoma!, Showboat, On the Town, West Side Story, My Fair Lady, South Pacific, Carousel, Camelot, Funny Girl, Damn Yankees, Pal Joey, Fiddler on the Roof, and Cabaret, among others.

The book’s final section examines how musicals have evolved from the studio days in recent decades. Basinger’s list of hits and misses includes Lady Sings the Blues, All That Jazz, A Chorus Line, Yentl, Evita, A Star Is Born (Streisand and Lady Gaga), A Chorus Line, Pennies from Heaven, One From the Heart, Flashdance, Dirty Dancing, Dreamgirls, Chicago, Bohemian Rhapsody, and of course, La La Land.