Mouths of Rain: An Anthology of Black Lesbian Thought 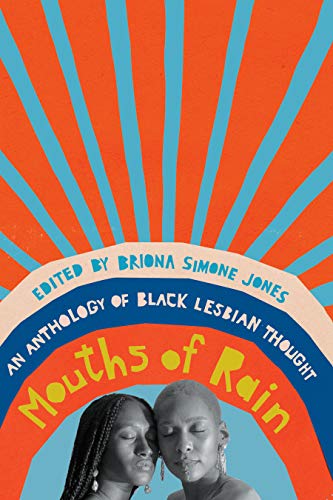 This book might have been subtitled An Anthology of Black Lesbian Writing. After all, it offers poetry, fiction, and nonfiction—some of it scholarly and historical, and some of it confessional, poetic, personal.

But by using the word thought, the editor and scholar Briona Simone Jones places the emphasis on thinking and ideas, though in most of the selections there is no assumption that “mind” and “body” are separate or that thought can’t and doesn’t issue in action and vice versa.

Many of the writers sing of, and electrify, the body of the-black-woman-lesbian, to borrow from Walt Whitman’s poem “I Sing the Body Electric,” in which he wrote rapturously, “This is the female form,/ A divine nimbus exhales from it from head to foot.”

The bodies in Mouths of Rain belong to women who are Black and lesbian. They all belong to Americans, specifically North Americans. The presence of Black gay women from other countries would have added depth to this book.

All revolutions and revolutionaries, whether they are political, spiritual, cultural, sexual, or a combination of all four, play with language.

Revolutionaries deconstruct words, define and refine them and invent new ones. They have to, if they’re going to decolonize, liberate, and recreate.

Those are the burdens and the joys of the 50 or so women, some famous, like Michelle Cliff and Audre Lorde, some not, whose writings are collected in this volume that hold up a series of mirrors to Black lesbians.

The poets, novelists and essayists shine a light on a subculture often in the closet and invisible to Black men, as well as white men, white women, and sometimes even to other Black women.

There’s also humor. In “Never Mind the Misery/ Where’s the Magic?,” the author, doris diosa davenport, (she doesn’t capitalize her name) describes a visit to her mother and a relative named Ethel Mae, on her mother’s side of the family.

Davenport says, “Momma, you suposed [sic] to tell the truth, and the truth shall make you free.” Ethel Mae replies, “Yeah, but you ain’t got to free me all the time.” The women laugh, and the author adds, “but the fact is, i have to at least try to ‘free’ folks all the time.”

The writers use words like womyn, butch, bulldagger, queer, dyke, lesbian, femme, vagina, pussy, praxis, florilegium, “fucknigga,” white heteropatriarchy and “ratchet.” That last word has a page on Wikipedia where it’s defined as “a slang term in hip hop that originally referred to an uncouth woman.”

Bettina Love explains in “A Ratchet Lens” that the word “has emerged as a means of describing Black women as “loud, hot tempered and promiscuous.” Some of the women in this volume would be proud to be called loud, hot and promiscuous.

In the essay, “Three for the Price of One: Notes from a Gay, Black Feminist,” Anita Cornwell writes that “black men were just as sexist as other men.” The authors explore “Bounce Music” and “afrofuturism. They criticize Black intellectuals like W. E. B. Du Bois and certain white book reviewers. They also trace the connections and disconnections between “defiant acts” and “resistance.”

Yes, there’s plenty of food for thought here, plus riveting narratives by Black, gay women who “withdraw” from the heterosexual world and find common ground with their sisters and with matriarchal figures from the recent and the more distant past.

If you’re Black and a feminist and want to be a critic, you could turn first in the pages of this book to an essay by Barbara Smith titled, “Toward a Black Feminist Criticism.” Smith’s work derives much of its force from the confluence of radical thought and radical action.

Now 75, Smith is a wise elder who ought to be far more widely known than she is. Mouths of Rain offers readers a rare opportunity to begin to hear the way her mind works.