To the Mountaintop: My Journey Through the Civil Rights Movement 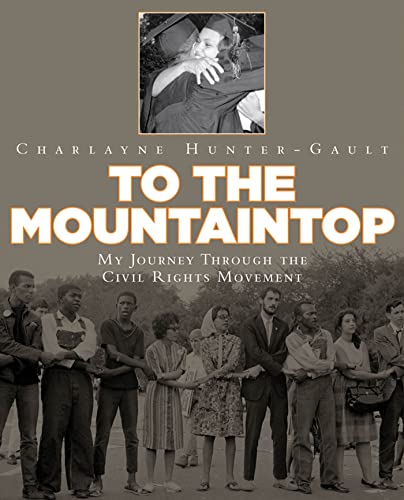 “To the Mountaintop speaks to the power of the press in both accelerating and deepening public awareness of inequality, as journalists such as Ms. Hunter-Gault explore once-overlooked events and perspectives. . . . [an] engrossing and uplifting account.”

Acclaimed journalist Charlayne Hunter-Gault gives a vivid and inspiring account of how she “stood on the shoulders of giants” in fulfilling her own significant role in the Civil Rights movement.

Among the 1.8 million who traveled to Washington, DC, to witness the 2009 swearing in of Barack Obama as the nation’s first black president were the author and her husband. Opening her memoir with a description of the event, Ms. Hunter-Gault says it led her to reflect on her own participation in the arduous trek toward equal rights.

Mingled with her excitement were bittersweet memories of the many braves ones lost along the way, whether through racist violence or from natural causes, including her friend and classmate Hamilton Holmes, who “walked into history with me through the gates of the University of Georgia.” Obama’s election marked a special place in that long journey fueled by the lyrics of the spiritual: “Ain’t gonna let nobody turn me ’roun’/ . . . Keep on walkin’ / Keep on talkin’/ Walking up the Freedom Trail.”

Ms. Hunter-Gault employs a lively pace and an accessible, photo-filled format that provides historical context for her role in the Civil Rights movement. The black-and-white copies of New York Times front pages provide fascinating insight into the events she relates, beginning with the 1954 Supreme Court ruling that rejected the legitimacy of “separate but equal” facilities, including public schools. Despite the law, years of inequity and dimmed prospects dragged on, as no state in the Deep South initiated desegregation. Separate schools, trains, buses, parks, pools, restaurants, bathrooms, and even water fountains pocked the region. The author cites the conditions at her elementary school in little Covington, GA, which had raggedy, incomplete old textbooks, and no cafeteria.

In Atlanta, where her family moved when she was about 10, she benefited from dedicated teachers and a nurturing environment. “We lived happily apart and generally removed from the worst manifestations of segregation, hardly ever encountering overt hostility from whites.”

Such a fragile balance foundered, though, after four black students at North Carolina Agricultural and Technical College held a sit-in at Woolworth’s five-and-dime, in Greensboro, NC, in 1960. Soon sit-ins spread across the south, including Atlanta, as African-Americans glimpsed the possibilities of a more just society. Thousands of local college students took to the streets of downtown Atlanta in 1960. Charlayne began her reporting career by covering such events for the bold new Atlanta Inquirer. (Another staff writer, Julian Bond, became its managing editor before vaulting into a many-storied political career.)

A significant prospect prevented Ms. Hunter-Gault from participating in those protests. Although she had been admitted to Wayne State in Michigan, several Atlanta civil rights leaders encouraged her and another outstanding high-school classmates to apply to the all-white University of Georgia, the oldest public university in the nation. At a time when it was uncommon for white students to attend college so far from home, black students’ choices were limited. Georgia, like some other Southern states, provided money for black students to study out of state.

Charlayne and Hamilton Holmes, then enrolled at Morehouse, agreed to accept the challenge. Knowing an arrest would likely result from participating in a sit-in, she refused to give the University of Georgia an excuse to reject her application. For a few more months, Charlayne would wait for her opportunity to challenge racism.

In the fall, the author returned to Wayne State but was summoned to Atlanta for the December trial that would determine whether she and Hamilton would be allowed to enroll at UGA. The NYT headline proclaimed their success: “2 NEGRO STUDENTS ENTER GEORGIA U.: Integration Effected as U.S. Court Blocks Governor’s Effort to Shut School.”

The author began the year of 1961 by walking through the iconic black-iron arch that marks the entrance to the oldest part of the campus. Those steps would lead not only to her own success, but also to her own groundbreaking role in the Civil Rights movement. Although she endured cold stares, taunts, and a window-shattering brick, she found strength in recalling the Twenty-third Psalm, which her grandmother had taught her. And while the author alludes to being isolated in her own room (in the gracious four-story Myers Hall, where this reviewer lived in the late 1970s), she balances that experience with recollections of the horrifying violence encountered by Civil Rights activists throughout the South, especially as they worked for voting rights in the dangerous state of Mississippi.

Ms. Hunter-Gault triumphed with her journalism degree from UGA and then headed to New York, but many of her contemporaries, such as the Freedom Riders, intent on protecting voting rights, braved beatings and worse. John Lewis, the group’s first to take a blow, in Rockhill, SC, recalled being “prepared to die.” Many, in fact, did—black and white, young and old.

To the Mountaintop speaks to the power of the press in both accelerating and deepening public awareness of inequality, as journalists such as Ms. Hunter-Gault explore once-overlooked events and perspectives. “I could still make a contribution by reporting on people who had been excluded from the white-controlled media. I resolved to seek out stories that showed black people in all their humanity–their problems, as well as their achievements, struggles as well as victories.” From Harlem to Gaza, from Somalia to South Africa, she has cultivated those stories and shared them with the world.

Even as Ms. Hunter-Gault looks back on her own career and on the highlights of the movement, she points to issues that deserve action, including the still-unsolved Civil Rights-era murders. Citing the Haitian proverb “Beyond the mountain, more mountains,” she stresses that the struggle for justice is never over. A timeline and the full text of 10 NYT articles provide additional context for this engrossing and uplifting account.