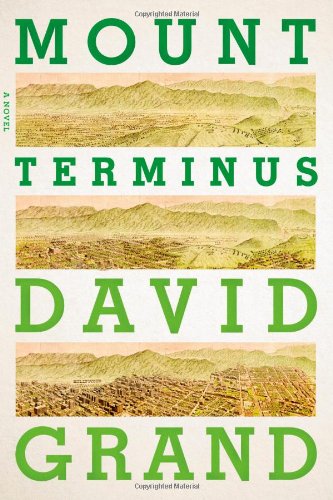 “David Grand’s third novel, Mount Terminus, is written in luscious, erudite prose so dense his readers have no choice but to read it slowly.”

In his recent nonfiction book Slow Reading in a Hurried Age David Mikics (who is a friend of this reviewer) adjures his readers to read more slowly. David Grand’s third novel, Mount Terminus, is written in luscious, erudite prose so dense his readers have no choice but to read it slowly. And what Mikics says about reading slowly applies to Mount Terminus: for sophisticated readers its degree of difficulty makes reading it a pleasure, not a chore.

It took Grand 11 years to write Mount Terminus. In an interview he told another reviewer that his process was to write two to three pages per day and then condense each day’s writing into a single sentence. Some of those long compound sentences are embedded in multipage paragraphs.

Unlike stream of consciousness writing, which often conveys a tone of urgency and a sense that the narrator’s thoughts are racing, Grand’s third-person narration in Mount Terminus is unhurried. Set at the turn of the previous century the dialogue also conveys that era’s more formal and reserved tone.

The novel is part biblical allegory, part historical and intergenerational family saga, and most of all a bildungsroman or coming of age tale. The protagonist of the bildungsroman is Joseph “Bloom” Rosenbloom, the only child of Jacob, an inventor and Rachel, a painter, who was raised for the first nine years of his life on an estate north of New York City called Woodhaven (not the neighborhood in Queens) and thereafter on another estate, Mount Terminus, located in the hills just east of Los Angeles and west of the San Gabriel Mountains. The book’s cover illustration suggests that Mount Terminus is at the top of the hill on whose bottom slope the Hollywood sign would be erected decades later.

Joseph’s parents’ backstory mirrors that of their biblical namesakes, the patriarch and matriarchs Jacob, Rachel, and Leah. Jacob and a pair of identical twin sisters (unrelated to him) spend their early childhood together in a New York Jewish orphanage before being separated by adoption.

Jacob and Rachel’s respective adoptive parents raise them in privileged circumstances, and Jacob becomes very wealthy by inventing a film looping device for movie projectors that made the motion in early motion pictures appear more natural. As young adults they reconnect, fall in love, and find Rachel’s twin sister Leah who has become an actress whose guardian and exploiter Sam Freed is an unscrupulous impresario.

As in Genesis, on Jacob and Rachel’s wedding night Leah impersonates Rachel. Jacob impregnates both sisters: Leah gives birth to Simon who like his mother is raised by Freed, becomes an actor and later a movie mogul, and a decade later Rachel gives birth to Joseph who has his father’s intellect and his mother’s artistic talent and temperament and is homeschooled by his parents at Woodhaven and—after Rachel’s death—at Mount Terminus.

After the move west the Jewish content of Joseph’s home schooling greatly diminishes, their cook Meralda introduces them to non-kosher Mexican cuisine, the High Holidays are observed via nature walks, and there is no mention of Joseph becoming a bar mitzvah. By then Los Angeles had four synagogues none of which are mentioned in the novel demonstrating how the characters’ connection to Judaism weakens as they ignore the maxim from Ethics of the Fathers, “Don’t separate yourself from the community.”

In their hilltop Spanish mission style mansion father and son are isolated not only from the Jewish community but from almost all people other than Meralda and their deaf-mute maid Roya. Part of the reason Jacob decided to move west was to put some distance between himself and Freed who has been blackmailing him. When Joseph is an adolescent his half brother Simon arrives and extorts from their father Jacob title to the valley below Mount Terminus whose orange groves he replaces with studio lots and residential housing.

When Jacob dies Joseph, a teenager who has by then mastered the equivalent of a college level classical liberal arts curriculum, apprentices to Simon’s top movie directors, writing and drawing film scenarios and storyboards. The two half brothers are a study in contrast: Joseph is a highly creative but somewhat passive, bookish, and introverted artist/intellectual, while Simon is a gregarious go getter entrepreneur.

The novel also presents a fictional account of the development of Los Angeles (whose name is never mentioned) and its film industry in the early decades of the Twentieth Century including a water supply dispute two decades earlier than the similar plot element in the 1974 movie Chinatown.

Readers who enjoyed Susan Daitch’s Paper Conspiracies (also reviewed on NYJB), another historical novel with an early cinema theme written in handsome dense prose, might also enjoy Mount Terminus as would readers of Kenneth Bonert’s The Lion Seeker (also reviewed on NYJB), an historical bildungsroman and intergenerational family saga whose prose in not as dense as Mount Terminus but whose foreign vocabulary poses its own degree of difficulty.