The Motion of the Body Through Space: A Novel 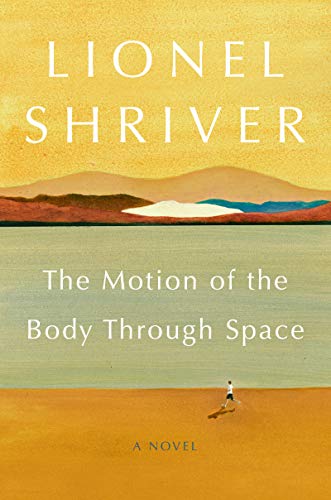 “My trainer believes in me,” Remington Alabaster tells Serenata, his wife of 32 years. Until now he has been a reliable couch potato, she an equally predictable fitness maven. And then one day he suddenly announces his intention to run a marathon.

Everyone is shocked. Even Remington’s father notes dryly that, “In my day you got paid to tucker yourself out” through manual labor. But folks who once looked down on people who worked with their hands now cheer on weekend warriors. Professional runners disparage charity marathons in which “fat, out–of–shape bucket–list box–tickers take seven or eight hours to finish . . . we’re talking, like, a twenty–minute mile.”

Shriver’s satire aims to show the degree to which we have become fixated on exercise to the exclusion of meaning in life. “I’d prefer not to think of our marriage as an endurance sport,” says Remington, to which his wife replies, “Maybe you should. Maybe then you’d take an interest in it.” Throughout, the book addresses the tug between these two forces. As Remington’s trainer Bambi insists, the body “thrives from being stressed” even as his monthly retainer exceeds the size of his father’s Social Security check.

Meanwhile Serenta, who works as an upstate voiceover artist, watches her body fall apart. The physical body she had “curated for decades” gives out. For starters she needs knee replacements. But “the motion of the body through space” actually refers to Remington’s legs and his running, which he, too, can no longer do. Yet despite being newly diagnosed with a cardiac arrhythmia after his own surgery, he tugs on his laces and announces his intent to “go for a run.” A triathlon in fact.

Belatedly he discovers that triathlons are “yesterday’s news,” having been replaced with even more grueling challenges like running in “Death Valley in July.” The author provides an afterword on AI machines that serves as a meditation on mortality. Machines having become more like people, what is left is for people to become better machines.

In the face of ageing and inexorable decay the Boomers’ denial stands large. And yet “the key to the “bucket list” wasn’t to systematically check off its to–do items, but to bring yourself to throw the list away.”