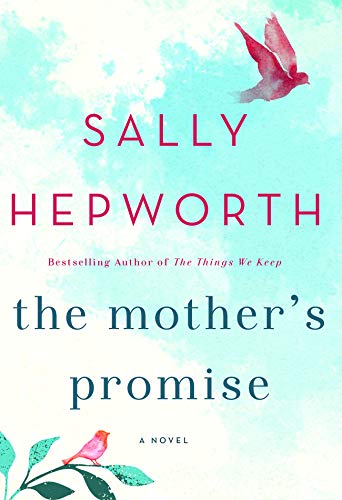 The Mother’s Promise is a chick-lit tearjerker that nevertheless conveys with sympathy and some depth the stories of four Northern California women who face difficult health and family problems, including important issues not typically found in fiction.

Alice Stanhope, a single mother who runs a small home-helper business for the elderly, is diagnosed with ovarian cancer, with only a 20% chance of surviving five years.

Her 15-year-old daughter Zoe suffers from such serious social anxiety disorder that she urinates onstage during a school debate.

Sonja, the over-Botoxed social worker whose help Alice rejects, is sexually abused by her famous husband.

Kate Littleton, the oncology nurse overseeing Alice’s care, desperately wants a baby, but after repeated miscarriages her husband, David, is no longer willing to try.

The reader truly comes to care about these characters through their pain, their mistakes, their strength, and their good intentions.

As Kate muses about Alice and Zoe’s heartbreaking social isolation, “Alice Stanhope didn’t have a single person she felt she could nominate to walk beside her in what was going to be the hardest journey of her life.”

That isolation is so extreme, in fact, that it strains believability. Yet the sadness is leavened by Alice’s wonderfully dry sense of humor. When Kate recites the pre-surgery instructions—no makeup, no jewelry, no acrylic nails—Alice interrupts: “Nothing to tempt the doctors away from their wives.”

Author Sally Hepworth, a former HR specialist from Australia who has written two other women’s novels, knows how to spin an engrossing plot. While some of the key twists are obvious 100 pages before their Big Reveals—duh, Harry Lynch, the football player who “wasn’t good-looking exactly,” has a crush on Zoe—they later take surprising turns.

The only problem with the plotting is that there’s too much of it. Every single loose end, even the tiniest, is tied up, including barely mentioned tensions between Sonja and her sister, Kate and her father, and Alice and her brother.

Hepworth is less skilled in her writing, which is pedestrian at best. Repeatedly, she smacks the reader in the face with commentary like “Kate was feeling resentful,” “the awkwardness was painful” for Zoe, “Kate felt cheated,” and similar pronouncements that shouldn’t have to be spelled out.

But on occasion, the insights get a touch deeper. “Sometimes motherhood was a hunger, Alice thought. An addiction. Most people were gradually weaned from it as their child got older. Alice had got to indulge in it longer than most.”

If she’d only taken the next step—letting Alice realize that her overprotectiveness toward Zoe has contributed to Zoe’s anxiety and their shared isolation—Hepworth’s novel would have had the complexity of real literature.