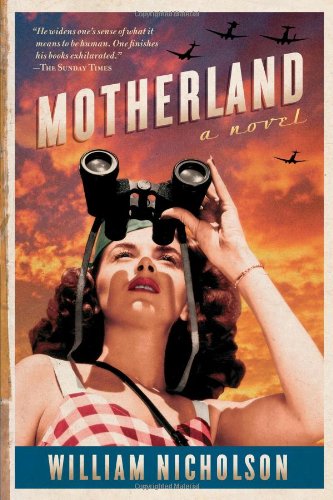 “. . . unfortunately, Mr. Nicholson buries a gem of an idea in a morass of predictability.”

Not the way most people want to envision their genesis, but that’s the explanation Guy Caulder gives his illegitimate daughter, Alice. Still, it makes her want to meet his estranged mother, Pamela, and in that process she is advised about the single successful marriage in her bloodline: that of her great grandmother, Kitty.

Against the background of an England fighting for her national life in World War II, Alice is introduced to Kitty, a pretty driver for the British military. With her decidedly class conscious friend Louisa, Kitty meets the handsome, dashing Ed and his lifelong friend, Larry.

Kitty falls immediately for Ed, and he for her. Unfortunately, Larry is also carrying a torch for his friend’s love. The three become embroiled in an intricate lover’s cauldron of desire, disappointment, and despair that will profoundly affect the futures of their families.

At the eve of the Dieppe raid, Kitty and Ed marry. He ships off to the catastrophic battle intending to hasten his death; instead, his action in plunging into battle saves the lives of ten comrades. He is hailed as a hero. In the same battle, Larry hunkers down simply trying to survive.

They return home to a changed England, limping along and trying to hold on to its colonies and place in the world. They also return to Kitty. While Ed tries to work through a lifelong history of depression to find light with his wife and child, Larry tries to find a replacement for Kitty. In doing so, he has relationships with two wildly disparate women and has his own moment of glory in India.

Ed’s decline, Larry’s existential despair over the meanings of love, faith, and loyalty, and Kitty’s attempt to make sense of her own feelings for both men flesh out the remainder of the story.

As a screenwriter, William Nicholson has a fine ear for dialogue (most of the time, though the exchange between Larry and Nell when they first make love is cringe-worthy).

His narrative hangs together so neatly that it is difficult to pull out isolated sentences for examples; each is dependent on the others for full impact.

His secondary characters are jewels, particularly the acerbic, snobbish Louisa and Larry’s wife Geraldine. His evocation of the horror of the Dieppe raid is well researched and thrilling.

So why doesn’t the story thrill?

There are a couple of reasons. First, Mr. Nicholson’s use of present tense is jarring. Though it was probably done to create a feeling of immersion in the events described, it actually serves to create a stilted and artificial narrative—especially when set alongside the fairly snappy dialogue.

Second, the story of Ed and Kitty is predictable. Ed’s point of view, even from his first introduction, is that of one who is doomed. Larry, in contrast, is puppy dog earnest. He struggles with his attraction to Kitty as manfully as he struggles with his faith in God and his duty to his family, abandoning everything he loves for the sake of pretty much anyone else’s desires.

The third problem is Kitty. She’s perky and pretty (as noted several times), but the reader is given no reason to believe that these men who love her instantly do so for any reason other than her looks. As a personality, she seems to exist only in juxtaposition with Larry or Ed.

Mr. Nicholson seems to be attempting a larger story than just that of a love triangle during the war and post war years. Given the title and the backstories of the characters, motherhood itself is on trial, both on a personal and national level. The characters are shaped by their mothers, and the choices they make trickle down through the decades.

Even England herself can be seen as going through the same cycle of desire, disillusionment, and despair in the story: desire to survive the war intact, disillusionment in the post war period, and despair over the loss of her colonies (in this case in Larry’s experiences in India).

This premise is intriguing and rather unique; unfortunately, Mr. Nicholson buries a gem of an idea in a morass of predictability. Buried too is Larry’s story. His struggle with love, faith, and duty isn’t a new one, but there is a note of genuine character and despair in him that is lovely and rings true in a way that Ed’s depression and alcoholism do not.

Motherland will probably become a movie. It has the pedigree of a good screenwriter and a familiar story. The problem with the second person narrative will be resolved.

But in revealing an oft-told tale, the deeper story of maternal influence (even if imperfectly developed) will be lost. It’s a pity.