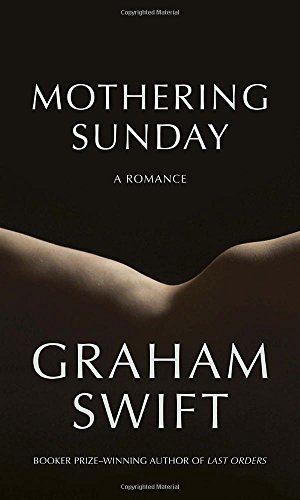 “Mothering Sunday: A Romance is a keeper.”

“You shall go to the ball!”

If the frontispiece of Graham Swift’s newest novel, Mothering Sunday: A Romance, hints that his story approaches fairy tale territory, the first line cements the deal: “Once upon a time, before the boys were killed . . .”

And a fine fairy tale it is, indeed. Having gone “into service” during World War I, housemaid Jane Fairchild is the archetypical fairy tale foundling. Having no mother to visit on Mothering Sunday, the third Sunday of Lent and typically the only day of the year serving women were free to visit their own mothers for the greater portion of the day, Jane instead meets with her upper-crust lover of many years. They spend a languid few hours in his lavish home, the first time Jane has been invited inside, marking an elaborate and poignant goodbye: Paul, the lover, is marrying in two weeks.

Over a slim 177 pages, Jane reveals their history, explores her own past, and muses on the meaning of that encounter. Eventually it is revealed that an aged Jane is reminiscing on that day and its place in her eminently successful later life. The denouement, when it comes, is both completely in line with her memories and a surprise.

Swift’s thin volume is rife with depth and sharp wit, juxtaposing evocative writing with earthy language: “The sun still coming up, a red disc, over the grey downs, the air still crisp and cold, while he shared with her, perhaps, a silver-capped hip flask and, not especially stealthily, clawed her arse.”

Post-WWI rural England is word-painted in water-colored loveliness, “Like the larks she would hear in a little while, trilling and soaring high in the blue sky, s she pedaled her way to Upleigh,” but the beauty is not meant entirely to entice; when set alongside the crumbling social hierarchy of 1920s Britain and Jane’s own obvious intelligence, it adds to the sense of fairy tale unreality that permeates Jane’s memory of that day.

Casual readers expecting a typical romance, based upon the title, are likely to be disappointed. Swift uses “romance” in the archaic sense: an act of chivalry. In light of modern feminism, it is easy to shrug off the chivalry of Paul in inviting Jane into his home through the front door (unheard of in the dying age of house servants), to his own private rooms, to wander his house unimpeded. Mr. Niven, her employer, shows the same chivalry in his support of Jane over the years, first in allowing her the run of his library, speaking to her gently, and later in allowing her to retain her dignity by returning home at a critical juncture. Niven is indeed a hero, albeit a quiet one, in Jane’s life.

Plays on the fairy tale and modern “twists” are all too common in contemporary literature, but Swift takes Mothering Sunday a step beyond in almost immediately beginning the deconstruction of his conceit. Jane is an orphan, true, but she is neither pitiful nor self-pitying. Her Prince Charming is almost immediately unhorsed, literally and figuratively.

Though Jane offhandedly tags herself as “comprehensively bereaved at birth,” Swift repeatedly returns to the anti-fairy tale theme of the fortuitousness of being beholden to no one.

His heroine, through being left a foundling, gains independence and an education that many young people of good family lacked. She has no one to lose in the Great War and has no ties to keep her from grasping whatever comes her way in the world.

After her assignation, Jane bikes toward home while reflecting on her good fortune: “Could she have done what she’d done today if she’d had a mother to go to? Could she have had the life she didn’t yet know she was going to have? Could her mother have known, making her dreadful choice, how she had blessed her?”

Inevitably this novel will be compared to Ian McEwan’s brilliant Atonement, given their similar themes of the plight of post-World War I English social structure. Swift and McEwan share a similar outlook in these stories, and indeed their writing styles are comparable: earthy language tied cheek and jowl with sublime description.

Mothering Sunday stands on its own in the creation of Jane Fairchild, though. She is no victim of her life; instead, she looks her reality square in the eye and plows on toward “the ball” that is life, reflective, but not mired in her station as McEwan’s characters tend to be. In that way, Jane is much more akin to Austen’s independent women of character.

“We are all fuel,” Swift, through means of Jane, tells the reader. “We are born and we burn, some of us more quickly than others. There are different kinds of combustion. But not to burn, never to catch fire at all, that would be a sad life, wouldn’t it?”

Jane Fairchild burns in a lovely way, as does Swift, leaving behind a legacy of rich language, apt description, cunning deception, and an eminently re-readable novel. Mothering Sunday: A Romance is a keeper.