The Most Famous Woman in Baseball: Effa Manley and the Negro Leagues 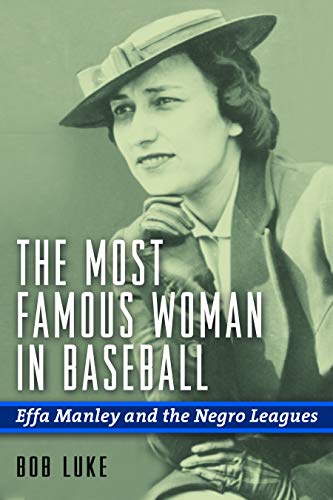 For her husband’s baseball club, and for black people in Newark, Effa Brooks Manley acted in the 1930s and 40s as a goad, a responsible manager, a pest, a sexual attraction, a civil rights activist, and even a spokesman for the players. At that time perhaps nobody else in baseball, least of all a woman, could boast such a combination of characteristics, and this book by Bob Luke attempts to reveal all these aspects of her life.

At league meetings Effa habitually argued with the other black club owners, trying to persuade them to emulate the white leagues by operating in a much more organized way and by bringing in outside leadership. They slighted her as a woman and told her husband to keep her at home. When her ideas finally had some effect on them, it was too late, for the white leagues were already ruining the black organizations by stealing black players.

To help the aspirations of black people of Newark Effa organized social affairs, lectures, recitals, marches, and confrontations with white businessmen, forming her own organizations and supporting existing groups like the NAACP. Sometimes she used her husband’s club for the promotion of race events. She also engaged in numerous extramarital sexual affairs with ball players and others who came within her circle.

To paint this portrait of Effa, writer Bob Luke had the advantage of access to Effa’s scrapbook as well as Effa’s club files, which cover her work from 1938 to 1946. He also read black newspapers published during the period, and he interviewed key people, offering informative endnotes in this book to support his statements.

This approach to research resulted in much detail about how the club was doing each year and how Effa worked to improve it, as well as the way she dealt with the many people within her circle. It does not, however, present a complete picture of Effa Manley.

In this book the author often makes statements that often raise more questions than they answer. Many examples come to mind.

On page 23, for example, Bob Luke asserts that in the second game of a doubleheader the Eagles “took it easy” against the Springfield Grays and lost it. Did the Eagles drop the game on purpose? The fact that Abe Manley and other owners gambled and made “fat bankrolls” as “numbers bankers” makes the reader suspect that the owners might have “put the fix” on the game, but the author never pursues the matter.

On page 14 Bob Luke claims that player Terrance (it should be “Terrence”) McDuffie “quickly became Effa’s favorite paramour.” Who were the others? Only one is mentioned. How did Abe feel about Effa’s taking lovers? Later in the book, we learn that Abe reacted to the McDuffie relationship by calling McDuffie a vulgar name and trading him away from the team, but since that didn’t end Effa’s proclivity for adventures with other men, he must have been a frustrated man. Did he never object to her affairs and her habit of finding men to co-chair her committees? Was theirs a difficult marriage? Why did he permit her to run his club?

The author has a habit of presenting some partial information and then stating, as on pages 33, 44, and 69, that he couldn’t find any anything to answer or explain it. More research in different sources might have overcome these problems. It’s frustrating to learn, for example, that the author could not find out what Abe was doing all the while Effa was running his club for him.

Finally, this book could have been a lot more interpretive. What was the long-term effect of Effa on Newark? Do city residents know and respect her contribution? Why should she be known as “the most famous woman in baseball”—how about Marge Schott of Cincinnati? How about Helene Robison Britton of St. Louis? These women, too, were well known in their time for contributions to their clubs. How does Effa’s work compare with theirs? Was it her personality that enabled her to think that she should and could take charge of a men’s ball club? The author lacks a broad view of women in baseball into which he could place the phenomenon of Effa Manley.

Despite the drawbacks to this book, it should be viewed as a good start on introducing a hardworking and colorful, even flamboyant, baseball woman to the list of people whose biographies should become known to fans and historians.