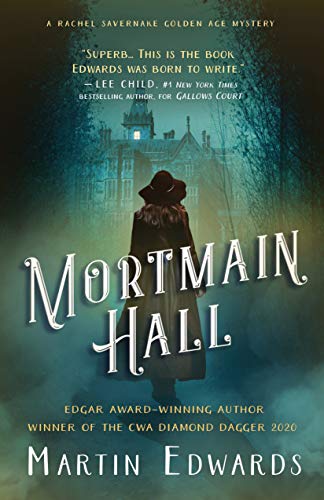 “A convoluted story of how justice will prevail, even if it takes an extraordinarily long time to do so.”

Jacob Flint, journalist for the London Clarion, is attending the murder trial of Clive Danskin, which has just been turned upside-down as a surprise witness saves the day and Danskin’s life by giving him an alibi for the crime.  Attending the trial is a woman Jacob can only describe as “looking like a witch.”

To his surprise, the woman approaches him afterward. Her name is Leonora Dobrell, and she writes true crime books. Leonora asks him to give his friend Rachel Savernake a message.

Rachel also studies crime but differently than Leonora. She has a very well-defined, if odd sense of justice, no doubt learned from observing her late father, Justice Savernake, a man who went by the letter of the law until the day he condemned an innocent man.

Rachel gets in touch with Leonora and is invited to her home, Mortmain Hall, for a weekend. She goes, out of curiosity as to why a stranger would make such an invitation, and because the other guests invited are Clive Danskin and two others who were tried and acquitted of homicide and whom the public believes got away with murder.

“‘Three guests who were accused of murder,’ Rachel said. ‘Each of them narrowing escaped being sentenced to death.’

‘Each noted as a victim of a miscarriage of justice,’ Leonora said.

There was a challenge in her dark eyes. The two women were duellists en garde as they faced each other.

‘How kind of you to include me.” Rachel relaxed into a smile. ‘I simply can’t resist.’”

While Rachel is preparing for her visit, Jacob is embroiled in writing a story about a man who fell from a train and was run over by another. The man’s identity is in question; Rachel says he’s actually Joseph Payne, thought to have died years before.

Jacob has no idea that moments before the man’s death, Rachel offered him a way to safety and he’d refused. It doesn’t matter, for she swears Jacob to secrecy about his identity.

“A one-sided bargain and ridiculously unfair, but those were her terms, take them or leave them. He dared not cross her. She ‘d always played by her own rules.”

Soon, he has a worry other than the causes behind the man’s death as his reporting instincts get him noticed by the wrong eyes and he finds himself framed for a murder.

It’s a good time to get out of the city and escort Rachel north to Mortmain Hall.

What happens there will be a shock to all participants, and will prove that justice may indeed be meted out by Divine Will.

The two protagonists in this novel—Jacob and Rachel—aren’t your usual romantically inclined individuals who solve crimes together.

By Jacob’s own admission “spending time with her always left him with muddled emotions. He was attracted to her; not merely her looks but her character. Yet her remoteness made her untouchable. He suspected she found him amusing and if the need arose, she’d sacrifice him without a second thought.”

Rachel’s attitude is more ambiguous. If there’s an attraction to Jacob, she never speaks it. Only once is there even an allusion to this, as Rachel is speaking to her maid, when Jacob comes to her after narrowly escaping compromise in a murder case.

‘So do you,’ Martha said. ‘Stop pretending that you don’t.’”

The attraction between them is very rigidly controlled so tightly they may never actually speak it aloud. Their individual back-stories are so complicated, it helps to have read the other novel in which they appear, Gallows Court, to understand the whys and wherefores causing this behavior.

This odd couple is greatly contrasted. Because of a childhood secluded and dominated by her father, Rachel broke free at his death, and is now a woman very independent for her era, calculating, thinking things out, and planning ahead, as well as involving herself—with the aid of her chauffeur and his family—in the questionable activities of people in tight spots. Jacob, in comparison, actually seems naïve and more or less blunders into things when he’s with her. By himself, he a successful and able journalist.

Apart, they do well at what they do. Together, they seem to find themselves in the middle of catastrophes.

Mortmain Hall is an interesting book in that it begins and ends with an Epilogue with the actual story, with a spiral of masquerades and murders sandwiched inside.

Martin Edwards is an Edgar award-winning author who is also the recipient of the CWA Diamond Dagger award for this year. In Mortmain Hall, he has written a convoluted story of how justice will prevail, even if it takes an extraordinarily long time to do so.