Mortal Fall: A Novel of Suspense 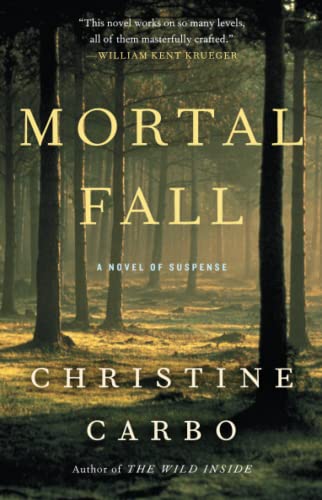 Mortal Fall unfolds against the powerful backdrop of Montana’s Glacier National Park, the same setting Christine Carbo used for her debut The Wild Inside.

Mortal Fall, however, shifts protagonists from Ted Systead, a special agent with the U.S. Department of the Interior, to Glacier National Park police officer Monty Harris, who played a role in Carbo’s first novel of suspense.

Both books, however, share Carbo’s sparkling ability to give readers fully-realized protagonists who carry around worries and woes mixed with an equal sense of wonder about the landscape, the wildlife and the human condition.

Carbo doesn’t do superficial. She gives her characters weight. And like her debut, Mortal Fall provides a story with dual tracks—the investigation into murder and the rugged journey of the soul.

Monty Harris needs facts. He has a propensity, he tells us, for getting a case of tunnel vision. He can tune out the lives of those around him and “escape into the pull of a new task.”

This trait might make for a good cop, but it has wrecked his personal life. He’s separated from his wife, Lara. She wants to start a family, but Monty is afraid of taking the risk. He’s worried that a family disease—paranoid schizophrenia—might be passed along.

The Lara-Monty strife doesn’t stay in the background of Mortal Fall, it nearly imbues every page. Where some writers might lay out the generic facts and reference the issue occasionally, Carbo looks for opportunities to put Monty and Lara in awkward, uncertain conflict on a regular basis. The tension around a family reunion scene will make you think of every gathering where you wanted to walk in the front door and out the back.

Told in first person, however, the focus of the book is on Monty, and he’s got questions about the fatal plunge of a Paul “Wolfie” Sedgewick, a scientist who is studying the park’s wolverine population. This is Monty’s first case, and he has plenty of reasons to get it right, not only because he believes in order and those pesky details, but he also wouldn’t mind showing Lara and his superiors that he’s capable of stepping up.

He’s eager as well, in his own determined way, to prove his talent. “I had the caught the power of the truth-seeking drug myself. Amid the sad and burdensome world of death and destruction, the quest for what happened, for the big T can consume you.”

And other strained relationships, including one with his brother, Adam. The tenuous connection between the two brothers is as fully explored as the rift between Monty and Lara. The brotherly bristling has more than a little to do with a childhood friend, Nathan, who “disappeared on a menacing Halloween evening” when Monty was in seventh grade.

The investigation in Mortal Fall forces Monty to interact with a broad variety of characters around Whitefish (where Carbo lives) and nearby towns. None of these “minor” players get short shrift in Carbo’s hands. Soon there is a second victim who dies in similar fashion to Sedgewick. The victim is Mark Phillips, a former counselor at a home for troubled teens. In fact, Glacier Academy is a place where his brother once spent time. Can you feel the story tighten?

“Mark Phillips. The name burned a hole in my mind. I had not heard it in years and with it came a link like an anchor to things dark, things under the surface that I’d long ago gotten a grip on and stopped thinking about. Now, all of a sudden, like a mean wave from the past, it was pushing, dirty and murky into the present through nothing but chance, coincidence . . . I hated to think fate.”

Did Monty really cut the past loose? Is that ever possible? He believes Glacier Park is a healing spot, of sorts. “It made me feel clean and whole, wiped away my past, and made my twisted home life seem distant and smeared away like thin, wispy clouds stretching into blue oblivion behind the mountains.”

Not so fast, Monty. Hundreds of pages later, he feels himself being “dragged straight into my family’s past by some heavy anchor.” (Given the lack of oceans in this neck of Montana, the anchor metaphors are interesting.)

And that’s what gives Mortal Fall substance. The answer to Monty’s investigation lays in the facts, of course, and those facts lead straight to the worst of the human condition.

Mortal Fall builds with a grim fortitude. Like Ted Systead in The Wild Inside, Monty Harris is after that ever-elusive emotional freedom.

The landscape suggests it’s capable of making you feel clean and whole. The people who live there, however, make you feel dirty and torn apart. The ugly gap between desire and reality is where you’ll find Christine Carbo, looking to see how real people react when their worlds become unmoored.