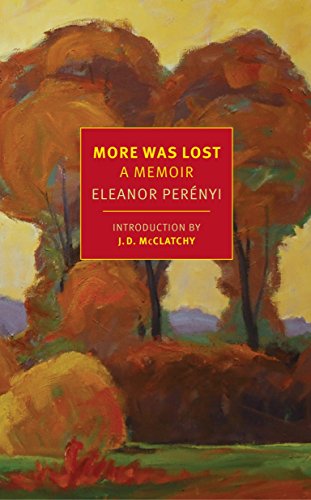 “More Was Lost is a memoir of two parts; the first reads like a fairy tale and the second like a nightmare.”

More Was Lost is the reissue of a 1946 memoir by Eleanor Perényi, a well known New York figure in literary circles. She was an editor of Harper’s Bazaar and later Mademoiselle. Her early books received critical acclaim, but she garnered her largest following with Green Thoughts: A Writer in the Garden published in 1980. It is considered a classic of garden writing. Much of the appealing detail of working the soil evident in Green Thoughts is also evident in the early part of this memoir.

Perényi, the daughter of a naval officer, and a novelist, at nineteen traveled with her parents to Europe and at a diplomatic party in Budapest met Zsigmond (Zsiga) Perényi, a young Hungarian baron, whom she married shortly thereafter in 1937. She moved with him to his family’s ruined estate in Ruthenia, then under Czech rule. They set about restoring the 750-acre farm and vineyard as well as the castle to working order.

On arrival Perényi is shown the gardens. “After lunch, Zsiga showed me the park. Under the drawing room windows was a rose garden, with a pavilion in the middle covered with rambler roses. At the back of the house the twisted limbs of three catalpa trees, nearly three hundred years old, reached past the windows of the main hall and beyond the roof. And along the edge of the lawn ran a line of old-fashioned standard rose trees. A big parterre elaborately planted was behind the rose trees.”

Beyond the house garden a neglected formal garden, then, alleys with thickly planted trees, fields, a vineyard, a view to Rumania, and in the west to Yugoslavia. There was even a solitary mountain on the estate and two large rivers passing through.

Perényi shares anecdotes of living and working on the estate within a defunct—almost feudal system—centuries old, amid visits from family and friends and entertaining them with all the frayed trappings of a dying way of life.

Throughout the book Perényi writes in a frank, clear, and almost casual manner inviting readers to share her delight in small triumphs on the estate and both her and her husband’s felicitous delight in their marriage. However, one cannot be unaware (especially as Perényi is writing from an American perspective) that beyond the friendly storytelling (and maybe inadvertently) she chronicles the imminent collapse of an anachronistic social order, as ancient and hate filled nationalistic rivalries inevitably spawn disruptive and terrible disruption that will tear apart the Old World.

When, several short years after her marriage, the war unfolds, Perényi, pregnant, is persuaded to return to New York. But not before she experiences some of the horror, deprivation, misery, and uncertainty the encroaching turmoil evinces on her estate and marriage. The separation splits the couple apart, destroying the marriage. Once again, in this section, Perényi writes in gracious, if emotionally distressing detail, about her heartbreak and the loss of her Rutherian home and now devastated way of life.

“Zsiga believed me, as I believed myself. I couldn’t see all the thousand things that would prevent it in the end, any more than I could see the child.” As she departs Laci, a Hungarian cousin, “…kept saying, infuriatingly, ‘The poor Baron.’ I felt I almost hated him for it. It was so close to what I felt myself.”…

“So it is that one passes insensibly from one part of life to another, from the past into the future.”

More Was Lost is a memoir of two parts; the first reads like a fairy tale and the second like a nightmare. Perényi’s coherently reassuring voice is simultaneously engrossing and intimate. Her memoir ranges from delightful detail to thought-provoking reflection. And all through the book her readers are aware of a sense of the historical relevance of her observations.

Janet Levine is a decades’ long freelance journalist, author, and lifelong human rights activist. Born in South Africa, her book Inside Apartheid: One Woman’s Struggle in South Africa represents but one element of her involvement in the anti-apartheid movement.