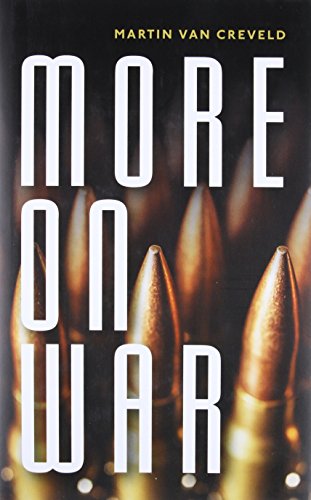 “brings a new evaluation to the common themes of both Clausewitz and Sun Tzu on the relationship between war and politics . . .”

Clausewitz and Sun Tzu have long been identified with their classic treatises on strategy and warfare; however, their discourses are products of their time and experiences and can seem very abstract and archaic to modern readers.

Martin van Creveld, an accomplished strategist and military historian, has written this volume to renovate and perhaps supersede these volumes by bringing a more modern and sophisticated understanding of strategy and warfare. He is mostly successful in this endeavor, offering new insights into many aspects of waging war ignored or not understood by those two great thinkers, and bringing their basic ideas into the 21st century.

The author brings a new evaluation to the common themes of both Clausewitz and Sun Tzu on the relationship between war and politics and the need for an understanding for balancing ends, ways, and means when formulating strategy or going to war.

He also corrects some oversights and shortcomings of those treatises with an excellent grasp of the more mundane aspects of waging modern hi-tech warfare, primarily the importance of staff work and logistics that are often overlooked by many contemporary strategic thinkers. His analysis of the relationship between economics, technology, organizational acumen, and strategy fills in a large gap of many strategic volumes that tend to over-emphasize operational or tactical maneuver.

In particular, his discussion of the role of culture, organization, training, and doctrine in the integration and utilization of technology shows that technology has not had as much of an impact on warfare as many strategists have assumed, since technology alone does not improve or make strategy any easier. In fact, it may give a military leader or politician formulating national strategy a false illusion of the utility of using armed force in international diplomacy than reality dictates.

In addition, the author discusses realms of warfare not deliberated by either Clausewitz or Sun Tzu, including sea power, which neither one seriously considered, and air and cyber warfare, which of course did not exist in their times. These discussions, as well as an excellent chapter on nuclear weapons and their continuing influence on strategy and conflict, make this a far-reaching volume introduction to contemplating strategy and warfare in the 21st century.

Although van Creveld certainly provides a thorough analysis of asymmetric warfare of a weaker versus a stronger power, one element that is not discussed is the role of public opinion, propaganda, and the other tools of modern information and psychological warfare used to great effect by insurgent and terrorist groups against Western powers. The role of “gray war” or conflict that is waged in an ambiguous manner to avoid conflict escalation, such as Russia’s seizure of the Crimea in 2014, is also not really addressed as the most significant challenge faced by military and political leaders today.

These are topics that his background and experience could have developed to a much larger extent. Although he makes a passing reference to the role of opinion, diplomacy, and politics in a typical counter-insurgency effort, there is a great deal of new thought on how insurgents, terrorists, and even nation-states like Russia, use these “gray war” strategies to not only target their own people and their adversaries’ populations for propaganda and misinformation, but the larger international community as well to further their strategic interests. It would have been thought-provoking to hear the author’s opinion on this topic and this is the only real inadequacy in this overall very fine book.