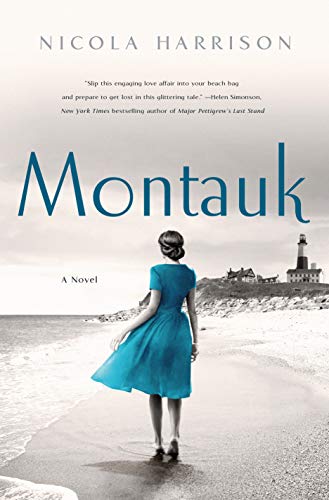 In the past 80-plus years much has changed in the world, in industry, social norms, and the way people now act and think. In Montauk, the year is 1938, and the wealthy women of New York City are vacationing in Montauk, Long Island, to escape the summer heat. For three months the wives of hardworking businessmen are pampered and spoiled. Nannies care for the children while their husbands spend weekdays in the office then come for the weekend to relax. It's a genteel atmosphere where the ladies attend soirees, beach parties, and live a life of luxury.

This is the first year 27-year-old Beatrice Bordeaux is able to join in the frivolities with other ladies of her class. Why then is she bored and lonely? Beatrice was not born with a silver spoon in her mouth but grew up in a small countryside town in Pennsylvania. College educated at Vassar, she didn't complete her degree but went to work in the city where she met Harry, her successful and handsome husband. He swept her off her feet and now they are into their fifth year of marriage.

Beatrice tells Harry she would prefer to stay at their home, for she does not know any of the women who will be at the shore.

"'What reason do you have to be in the city?' His quick response felt sharp. Feelings of futility came gushing to the surface and I felt my cheeks burn red.

"'Well, I could work again,' I said, quietly, turning the stem of my glass, making small ripples in the cream-colored tablecloth. But Harry told me, once again that it wasn't appropriate for someone like me.

"'We've already discussed this, Beatrice. You're not a college girl anymore, or a farm girl for that matter. You're a Bordeaux now and you should be proud of that.'"

After arriving at the shore, Beatrice is happy to be out of the stifling humidity of the city and the chance to now savor some alone time:

"Now that Harry was gone at least I could read my new book by Virginia Woolf. He didn't think I should be reading that kind of 'feminist baloney,' so I had kept it under the bed for the whole weekend."

Beatrice's main sensation of isolation comes from the fact she does not have a child. Though trying, they've not been successful. And as time passes, Harry is more and more distant, leaving her wondering if he is losing interest with her because she has not produced an heir. He insists he is extremely busy with some others who are looking into invest in Montauk property, since the original founder lost almost everything in the Depression.

Also, she cannot get over the loss of her beloved older brother, Charlie, who died in a freak accident not long before she met Harry. Her thoughts turn melancholy as she grieves his death and her failure to conceive.

The elite reside at The Montauk Manor, a 200- room luxury hotel located on the ocean with a yacht club that offers many activities for the women. Between parties, dinners, and fundraisers, Beatrice feels she's out of place with the other wives for they have nothing in common. She is befriended by Dolly, who is a bit older and childless, and who, with her husband owns a millinery factory in the city.

One day after missing Elizabeth, the laundress, Beatrice rushes to catch her to present her with the clothing she needs to be cleaned. Elizabeth lives on the other side of town and is the mother of four rambunctious boys. Beatrice shares an affinity with Elizabeth, though the locals keep at a distance, not wanting to mix with the uppity summer folk.

To pass the time, Beatrice takes long walks through the village and forests. One day she encounters Thomas Brown, the Montauk lighthouse keeper. She is fascinated by the tower and pleads with him to show her around and tell her about it.

Thomas is completely the opposite of Harry, and for some reason, Beatrice is drawn to him. She can converse with him in ways she can't with her own husband, and she enjoys his company, too. But what would people say if they saw them together? He's not a gentrified gentleman, but a worker. If it becomes known she talks to him, even though platonically, it could ruin not only her reputation but Harry's, too.

As summer wears on Beatrice spends a lot of time alone or with the locals, and she gains more confidence.

"I'd always been scared of everyone and everything: scared if I did the wrong thing, said the wrong things, scared of losing the people closest to me, of being all alone in this world. And yet, I'd been knocking down every fear I'd confronted since I'd set foot in Montauk."

Many of the businesses described are still in existence today, giving a history lesson as to how the locale came to be the playground of the rich and famous. Montauk offers the reader an in-depth look at the past as well as demonstrating the prejudices and haughtiness of the wealthy at that time. The division between the classes is highly evident, and the way women were looked upon and treated gives new meaning to "feminism" and the world we live in today.