The Molecule of More: How a Single Chemical in Your Brain Drives Love, Sex, and Creativity―and Will Determine the Fate of the Human Race 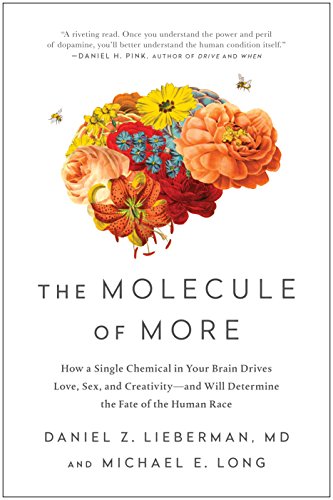 “An overblown title signals a kitchen-sink approach—too much, too repetitive, too speculative. The molecule of more has taken over judgement and discernment.”

In The Molecule of More: How a Single Chemical in Your Brain Drives Love, Sex, and Creativity—And Will Determine the Fate of the Human Race, psychiatrist Daniel Z. Liberman and physicist–turned–writer Michael E. Long have produced a book both confused and confusing. Its overblown title signals a kitchen-sink approach—too much, too repetitive, too speculative.

The book aims to explain the broad, profound influence of the dopamine “pleasure molecule” in everyday life, at cultural branching points in human history, and as a driving force in human evolution. But calling dopamine the pleasure molecule, as it commonly is, is a misnomer, say the authors. From dopamine’s point of view, “it’s not the having that matters. It’s getting something—anything—that’s new.”

Dopamine–producing cells constitute only 0.0005% of the brain, yet the molecule holds a passport to every nook and cranny of it. Unfortunately, this point is not expounded clearly, and the book’s numerous sidebars, text boxes, and too-frequent section headings add to the confusion. Some sections are only a page or two long. The attempt to be comprehensive makes it hard to follow the book’s argument. Whatever through–line there might be is muddled by sprawl.

Suggestions for “further reading” follow each chapter. But these do not make up for the absence of references linked to specific assertions within the text, making it impossible for readers to weigh evidence. Readers must wade through laundry lists of examples. Section headings are given equal weight, meaning that no single idea stands out.

The book does take off in its final three chapters that speculate about the consequences when one presumes dopamine to be the central molecule of existence. This line of thought proposes that dopaminergic genes “propel people to seek new opportunities,” thus “driving them to emigrate.” But then comes a sudden change in subject to bipolar disorder without establishing its relevance. The US, they note, is populated “almost entirely by immigrants” and has the highest rate of bipolar disorder, 4.4%, twice the rate as the rest of the world. Japan, “which has almost no immigration,” has a bipolar rate of 0.7%, the lowest in the world.

Such a conflation of correlation with causation is a feature throughout. Yes, it is interesting that a disproportionate number of American Nobel laureates have been immigrants, but the claim that the “United States has been shaped by dopaminergic immigrants” wants supporting evidence, as does the citation of Tocqueville’s Democracy in America that the nation was “expanded on the dopaminergic theme of never enough.”

The authors may be on to something in noting the downside of being in thrall to the wanting molecule. Identifying with our dopamine circuits “traps us in a world of speculation and possibility.” They say that “we neglect emotion, empathy, the joy of being people we care about” when we focus so strongly on our wants. Families especially suffer.

Technology changes fast while evolution is slow, and “we are stuck with our ancient brains.” One solution they propose is to curtail consumption, “drive less, fly less, and consume less. . . . Behavior driven by dopamine will need to be drastically suppressed in the era of better, faster, cheaper, and more.” But the authors don’t suggest any ways to accomplish this.

Instead they end on a bleak note: Nothing is ever enough for dopamine. Like drugs, winning can be addictive, and winners cheat for the same reason that addicts seek out drugs. The desire circuit doesn’t care. It only wants more: “More drugs, more success, more wins.” The book could have used more editing.