Modern New York: The Life and Economics of a City 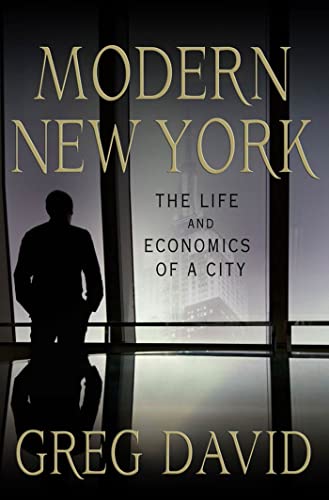 New York is a place in which finance drives the economy, generating the means to fund luxury and lavish lifestyles; real estate is the status symbol, the stage, and the ultimate self-indulgence; and government is the risk absorber, the place promoter and the place steward, the American epitome of crony capitalism in action.

The story of New York is the story of persistent change, continuing influence of powerful institutions, and relentless reinvention.

Another way to view New York is through a prism of extremes, careening from record defying success to the despairing hopelessness of insurmountable problems.

A third frame is the ongoing balance act of reconciling the interests/desires/entitlements of big money business interests and those same, albeit expressed at the opposite end of the spectrum, of the underclass, the common man and woman citizens of the Great City of New York.

Greg David employs all of these perspectives and more in Modern New York: The Life And Economics of a City. His book traces a half-century of the city’s economy: its politics, real estate deals, major economic development initiatives. Among topics explored are the greed is good ethic, crime and safety, immigration, the dot.com boom and bust, Olympic dreams.

New York enjoys prestige and market opportunity advantages over the majority of other metros, yet it costs more to live in New York to visit or to do business. Ultimately, choosing to be in New York is justified by the city’s place value proposition: the value for money quality of life on offer.

Mayor Michael Bloomberg’s decision in 2002 to raise the city’s property taxes by an unprecedented 25% reflected his “philosophy about how he would manage the city.” The Bloomberg administration would preserve the city’s quality of life, not only with the police and a commitment to stay tough on crime, but extending to other services and to the social safety net that New York provided.

It was the quality of life that was the bedrock of the economy. If that meant that New York taxes were high, it was a cost that could be borne. New York was a premium product, he said, and “wasn’t for everyone. . . . Anytime he or one of is aides discussed their strategy for the economy, they started off by saying a strong economy began with improving the quality of life in the city.”

Eventually, as crime concerns and the all important public statistics regarding crime incidence declined, hotel construction soared, and hospitality room inventory provided the means to accommodate ever more tourists. Tourism today is one of New York’s major industries, counting for the majority of Broadway show tickets and attendance at major museums plus driving restaurant and retail spending.

Over the last four plus decades New York City has been battered by four major economic performance reversals, over which periods the role of finance in the metro’s economy increased dramatically, soaring from 3% of the City’s income in the 1970s to a high of 28% in 2007.

Manufacturing once powered the New York city economy, representing over a million jobs after the Second World War, still counting for 850,000 jobs in 1969, but declining to only 95,000 jobs in 2009.

Over the last several decades, the New York economy has replaced 750,000 of those lost manufacturing jobs through gains in education, film, television, and Internet/new media.

Fascinatingly, New York has simultaneously reflects the decline of old manufacturing and the emergence of new industries, which phenomena are most prevalent in very different places rather than the same place. The city’s dependency on finance—has enabled the city to adopt and absorb the shifting industry leadership, changing business models, and new ways of working.

At a time the nation’s economy is ever changing, less stable, and ever more uncertain, the city of extremes and paradox, exuberance and resiliency, opportunity and ruthlessness, has proven to be more balanced and adaptable than the country as a whole.

Greg David’s narrative combines stories of success and failure punctuated by provocative statistics and complemented by incisive quotations of leading players in the New York scene.

Further, each number reflects a pattern or trend of larger forces. While statistics are indispensable for capturing, comparing, contrasting aggregate levels of performance for large enterprises, most especially places, each number is the composite and intersection of individual stories of aspirations realized and bitterly crushing setbacks.

New York finance is ever more short term, transactional, even fleeting in its time orientation. With people more likely to scan a blinking computer screen than to read a book length treatment of an important subject, the subject volume makes the especially important contribution of a more deliberate, thoughtful chronicling of the recent history of the New York economy.

Modern New York offers valuable insights and lessons into what is involved in making a great city in the 21st century, useful not only to those who live in and interact with New York but to those who have leadership roles for places and companies that might interact, collaborate, or compete with New York.