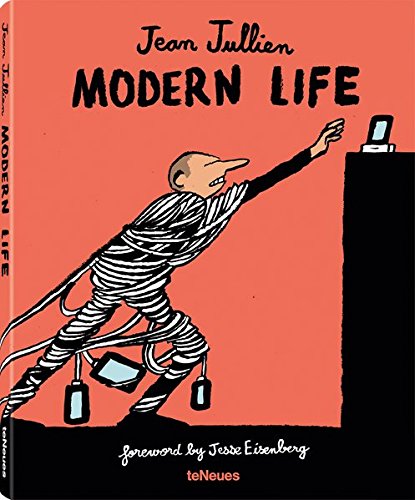 Modern Life is an expedition through a universe of insightful images that chronicle artist and illustrator Jean Jullien’s perceptions and observations of 21st century life. He describes his creative process as immediate, spontaneous, and raw when he says, “I tend to get ideas just walking around and scribble them on anything I find (often a napkin), then work on them when I get back to the studio. It’s important for me to be able to ‘snap’ these moments as it is how genuine they are that will define how accurate my depiction is. I can’t draw a pub from photos, I have to somehow experience it first, which I don’t mind!”

It is said that a picture speaks a thousand words, and in that sense it is a clear paradox to review this work at all. It is imperative to take in Jullien’s compositions visually in order to enjoy their full effect the same way one cannot discern to like or dislike a food by reading about it. His work is infused with robust flavors that demand to be tasted. Jullien’s pieces are made up of striking graphics that speak to ironies inherent in human behavior and every day life.  There is a powerful authenticity between his brainstorming method and conceptual content as he allows the world around him to mother derivative notions that he ultimately transforms into pictorial art.

Modern Life is a humorous collection of visual puns, but also a commentary on social issues and the evolution of how humans interact with one another. The artist illustrates images that are disguised as lighthearted and uses cartoonish graphics as a vehicle to communicate profound insights regarding 21st century culture. He consciously employs his signature approach, black outlining with bold blocks of color, to give priority billing to the message:

“When I create an image, be it for commercial or personal purposes, it is because I have a message to deliver. That’s the primary objective and everything that comes after is somewhat expendable. That’s why my work sometimes appears to be quite minimal or naive, because I try to stick to what’s necessary to be read and understood in the best way.”

Jullien tells an astutely sequenced story in which each image informs the next and contributes to an expanding message. It is as though every page depicts an integral piece of the societal animal the artist is striving to illustrate. Jullien does this very successfully as he often juxtaposes thematically related illustrations and denotes a historical shift (then and now). This technique compels the reader to take a closer look at his message.

“It’s certainly something that I try to do: composing an image in a very pragmatic way, in terms of contrast, colours, and shapes. Trying to appeal to the cognitive part of the brain, more than to personal taste.”

Modern Life is an enjoyable collection of humorous works as well as a remarkable and honest interpretation of everyday life. Through the eyes of an artist, we are treated to a look at the insanity of man himself. You will get a kick out of it.