The Modern Dad's Dilemma: How to Stay Connected with Your Kids in a Rapidly Changing World 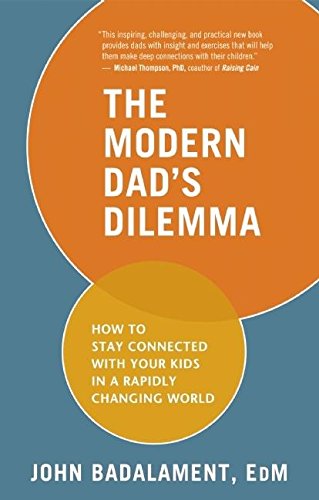 Being a dad is just about the easiest thing in the world. It’s merely a matter of placing some sperm in the right place at the right time. Being a good dad, on the other hand, is far more difficult.

Despite the recent research that purports to show how little influence parents actually have on their children’s development and ultimate happiness and success, anyone who is or has been a parent knows that the things we say and do have a profound impact on the little ones. I’m sure mothers feel their role is far more fraught with complications and difficult trade-offs than that of us men, but having raised two sons this reviewer can testify that being a good dad is no walk in the park.

According to Badalament, who has been studying and teaching the ins and outs of fatherhood for more than ten years, and who directed the 2002 PBS documentary “All Men Are Sons: Exploring the Legacy of Fatherhood,” the trick is to build and maintain a strong and emotionally connected relationship with one’s children. But of course, that’s easier said than done.

In fact, Badalament asserts that such a complicated role has never been expected of dads until relatively recently. Most of us reading this review were, in fact, brought up by a father who had never been told that feelings mattered. Our fathers concentrated on earning a living and interacting with the outside world on behalf of the whole family. For these men, emotional stuff was the mother’s domain.

In Badalament’s view, that’s no longer the case.

Today, argues Badalament, we know that exercising our basic human qualities, including self-expression, emotionality, and nurturance, greatly enriches family life, makes for healthier children, and even helps to extend a dad’s lifespan.

Badalament encourages men to undertake a new type of fatherhood in which we take a proactive stance toward our responsibilities: looking for opportunities to engage with our child, choosing parental activities—at least some of the time—over solo or careerist or pleasure-seeking possibilities, putting more effort into learning the ropes of modern parenting, and collaborating more closely with our child’s mother. What would probably be most difficult for “old school” dads is Badalament’s recommendation to admit they don’t have all the answers, and to open themselves to advice, information, and sharing their problems.

In all this, Badalament knows whereof he writes. He went through a classic estrangement and rapprochement with his own dad. As he delved deeper into the mechanics and complexities of this category of interactions—through his documentary work and later researching this book—he developed both his expertise and his ability to impart good fathering techniques to dads. In this book, he presents a number of stories gleaned from his interviews with a wide range of dads (and what he calls “dad-figures”) whom he met while giving fathering workshops and lectures, or who were referred to him by others along the way. Each of these stories not only exemplifies some aspect of the essential qualities he’d like to see in all modern dads—taken together they also paint a picture of men’s growth as dads, growth that often resulted from their doing the very exercises that Badalament prescribes in this book.

One easy-to-swallow element of Badalament’s approach to upgrading a modern dad’s skills and abilities is his relatively masculine treatment of dads. He advocates they develop a vision statement. He suggests they take a strategic approach to fatherhood. He encourages them to think in terms of what they can do to be good fathers. He even talks about technology’s role—both for good and for bad—in how dads can interact with their children.

Another likable aspect of Badalament’s prescription for modern fathers is his emphasis on the importance of modeling a good relationship with a child’s mother. Sons are likely to imitate their dads in at least some ways, and their treatment of women often tops the list. Daughters are likely to develop their expectations about their boyfriends and/or husbands by watching how well or how poorly their dads treat Mom. Badalament’s good dad gives both boys and girls a solid, positive, loving picture of what a modern dad can be.

Badalament also makes the requisite arguments in favor of challenging leftover gender stereotypes, such as calling a young girl “pretty,” for example, thereby inadvertently conveying the unhealthy message that her appearance is of primary importance. Having called many young girls “pretty,” I can testify that it’s easy to agree with that argument, but much more difficult to remember to modify the message by adding something like “and you’re so smart and capable.”

Dads who want to improve their fathering skills will appreciate the 35 pages of exercises Badalament has conveniently provided at the back of the book. They range from the basic formulating of a vision statement through the inventorying of the central gifts and liabilities readers received from their own fathers and will—consciously or unconsciously—pass on to their own children, to a highly detailed Modern Dad’s Relationship Checkup, which Badalament thoughtfully gives in two versions: one for children under ten, and a deeper one for children over ten.

The Relationship Checkup involves a long list of questions designed to evoke relatively deep feelings, values, and experiences. Badalament advises dads not only to ask the questions of their children, but also to provide their own personal answers, and then to share these answers in an atmosphere of honesty and acceptance. “Use good body language,” writes Badalament, somewhat optimistically, in my view. “Avoid getting defensive.”

This quiz alone is worth the price of the book. Dads who can get themselves into the appropriate “zone” where they can answer these questions for their child, and listen with an open heart and mind to their child’s answers, will almost certainly turn out to be excellent dads.

As Badalament says in his introduction to this book, “It’s never too late for the truth.”