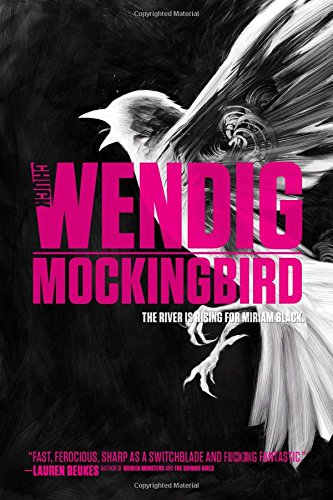 Encompassing the same subversive vibe as its predecessor, Mockingbird begins with the irrepressible Miriam Black taking a stab at domestication.

Now residing at a permanent address in the form of a double-wide, moored in an area rife with tweakers and dirt bags, Miriam passes the time as a cashier in a local sundries store. With her gentle giant Louis on the road most of the time and her nagging, obnoxious boss Peggy breathing down her neck everyday it's no shock Miriam begins to feel contained.

By keeping her hands gloved, Miriam ensures that she doesn’t inadvertently touch someone and end up laying witness to their death. But having reached her limit of dealing with annoying tourists and overbearing authority, Mariam is fired.

Not one to make exit quietly, Miriam throws gloves and caution to the wind vowing to move on, but not before she finds out if Peggy’s future holds a slow and painful death.

After making forced contact she sees that Peggy’s death will not only be fast, but very imminent. And as is the way with Miriam Black it’s all downhill from there.

Shortly after, while doing a favor for Louis, a chance meeting with a young girl reveals a vision of immeasurable evil that literally brings Miriam to her knees. Armed with the knowledge that many young girls will fall victim to a sadistic predator, Miriam must find a way to save their lives—even if it means losing her own life in the process.

Though Mockingbird picks up where Blackbirds left off, the concept has progressed, opening up a whole new realm of possibilities for Miriam and her plight. Whereas previously she found it difficult enough dealing with her curse, things have now been taken to a whole new level.

No longer the fun and games of waiting for her mark to die so she can clean out his wallet, now a sense of duty and responsibility has somehow ingratiated itself in the process. It’s not a matter as to whether Miriam is maturing or a higher power is involved, it’s happening and she needs to get on board.

Caught in a love-hate relationship, Louis truly cares for Miriam, although he can’t comfortably abide by the very thing that defines her. The fact she saved his life isn't lost on either of them—especially given that Miriam is the reason his life was in danger in the first place. Yet despite it all, Louis is determined to be Miriam's savior—an endeavor tantamount to fitting two pounds of flour into a one-pound sack.

Though she exhibits a healthy level of self-hatred mixed with sad resignation regarding her life and all it encompasses, Miriam has her moments of vulnerability and at times reveals a soft spot or two—unfortunately, the minute it happens she quickly cauterizes those spots to ensure it never happens again.

Miriam Black is an E-ticket ride, and definitely not for the feint of heart. Though she seems like a big basket of crazy, Miriam has a pretty good hold on herself—albeit a little too tightly at times.

Lacking in tact, manners, and most social graces, she still manages to hang on to at least one necessary virtue that helps maintain her sanity: compassion.

Chuck Wendig’s second offering is fast-paced and raw, filled with gutter-like prose that never minces words and is expressed with the all the subtlety of a punch in the face.