Moby-Duck: The True Story of 28,800 Bath Toys Lost at Sea & of the Beachcombers, Oceanograp hers, Environmentalists & Fools Including the Author Who Went in Search of Them 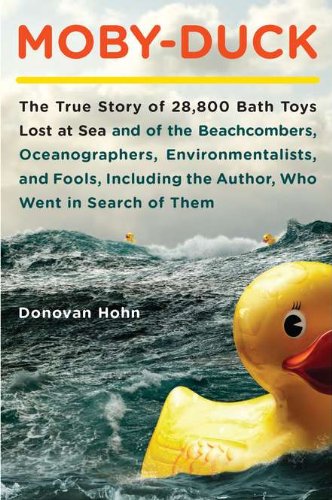 They say it takes only the first paragraph to know if you’re in good literary hands. In the case of journalist Donovan Hohn’s debut book, a nonfiction quest tale, you don’t have to wait that long.

The title, alone, does it: Moby-Duck, The True Story of 28,000 Bath Toys Lost at Sea and of the Beachcombers, Oceanographers, Environmentalists, and Fools, Including the Author, Who Went in Search of Them. A prologue confirms the first impression—and augments it, previewing how Hohn will recount his adventures at sea with expertise, wit, humor, and charm.

It’s the full, informed narrative, however, that proves Hohn’s success as a popular science writer. Interspersing his quest story with delightful self-deprecating remarks about his innocence and ignorance, as he includes ever-increasing authoritative technical details, Hohn consistently engages the reader by way of admirable storytelling skills. The ambivalent theme of the attractions and dangers of nonbiodegradable duckies deepens with the author’s intermittent five-year quest, and is enhanced by brief but astute delineations of the various characters, amateur and pro, that he meets along his watery way. Nautical metaphors mount, literary references and allusions assert themselves, and sentence rhythms take on the roll of the sea.

This is an impressive book. And a timely one, considering the various international agencies and individuals involved in trying to green the globe—and what an attractive, affable guide. After learning from a paper by one of his high school English students that a cargo of rubber ducks and other plastic toys (frogs, turtles, beavers, all called “floatees”) had been lost at sea in 1999 when containers transporting them spilled overboard in a storm south of the Aleutians, Hohn began wondering where they came from, where they wound up, why, and how. Never mind that his wife is soon to deliver their first child, or that he is “a weakling with a bad back” just over surgery, he signs up for a short wilderness excursion with oceanographers and treats himself to a crash course on various scientific subjects, thinking that afterward he will further navigate his curiosity from his desk at home.

As for traveling on boats, well, he once went to sailing school when he was 13. What Hohn does not foresee, of course, is that the floatees will turn out to be his white whale. “But that’s the thing about strong currents: there’s no swimming against them.” The toys had gone adrift, he writes, “I’d go adrift too.” He becomes a “professional duckie hunter” (bibliography and notes testify to his wide-ranging research), though, for sure, his passionate, critical, and funny observations will keep him from the monomania that infected Captain Ahab. Rather, call him Ishmael, or Starbuck. He did quit his day job and lived to tell his tale, which is instructive as it is entertaining: a “fable for children” and a “cautionary” memoir for citizens around the world.

The narrative is divided into “chases” as Hohn widens his quest from a hunt to find ducks that have washed ashore to a search for facts about their manufacture and transport, and an inquiry into the wheelings and dealings of corporate and government interests vis-à-vis those of environmentalists of various shades of devotion and experience.

Like all well-written adventure stories, Moby-Duck also becomes, like Moby Dick, an interior quest, a testing of motive and behavior, a questioning of commitment and courage. For Ahab, self-knowledge does not lead to responsible action. Hohn, on the other hand—though he shrewdly subsumes his own education into his larger theme about threats to the planet—does come to know that “it is upon Rachel Carson’s ocean, not Melville’s, that I’ve sailed.”

With more details than a reader may be willing to absorb at a single sitting (as in Moby Dick) Moby-Duck presents information in lively, at times, eloquent prose. So clearly partisan (against the proliferation of plastics) though fair in presenting the argument of ecology vs. economy, Moby-Duck may best be absorbed in increments. The argument, nonetheless, is overwhelmingly persuasive: Despite the fact that duckies don’t constitute as immediate a threat to the planet as global warming, “as scientists, plastics executives, and environmentalists agree: the amount of plastic in the ocean is increasing . . . accumulating more quickly than anyone had realized.” A sobering thought, among many, comes at the end of the third chase: “The very features that make plastic a perfect material for bathtub toys—so buoyant! So pliant! So smooth! So colorful! So hygienic!—also make it a superlative pollutant of the seas.”

A recovering academic, Joan Baum has for decades reviewed books across numerous genres in newspapers, magazines, and radio. In addition to New York Journal of Books, current reviewing includes NPR.