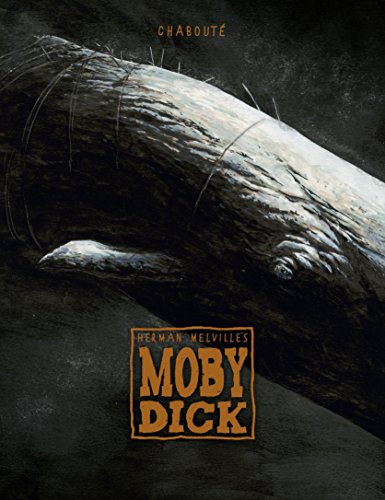 “proves a compelling vehicle for a retelling of one of the world’s greatest stories.”

Adaptations of classics can be tricky things. Television and film often come up against the usual suspects: problems with length, translation, or the fact that some novels don’t lend themselves well to other art forms. Whether a reinterpretation or a stickler for source material, updated versions of literature’s great works have their work cut out for them. Christophe Chaboute’s graphic novel of Herman Melville’s masterpiece Moby Dick is no different, though it makes a valiant effort and harpoons a good deal of the targets set before it.

Chaboute’s version follows Melville’s book closely, particularly in spirit. This is no small feat as narrative is almost nonexistent and dialogue dominates the pages. He effectively says more with less, letting his pictures paint thousands of words.

Drawn in a stark pen and ink pared-down style, the work has a throwback vibe that works well in the context of a classic. It’s got a sharp edge and bleak tone to it, helping to render characters as the hard seafaring men they are, as well as showing the relentless pursuit of Moby Dick as the cold, calculated, vengeful act it is.

The panels are often tilted, giving a superb off-balance sense of life aboard an old sailing ship on the open ocean. Chaboute often speaks only in silhouettes to great effect. The black and white also recalls a time and era when people thought much more in terms of such.

Captain Ahab’s madness and single-mindedness of purpose are reflected commendably, as well as the alternating loyalty and increasing worry of his men aboard the Pequod. The tale of the great white whale moves at a good pace in this form, granting a fair amount of valuable insight to a sailor’s lonely life as well as the savagery, courage, and often misguided heroism of whaling in its early days.

This graphic novel was not without a few faults, however. Right off the bat, the introduction written by John Arcudi is a bit presumptuous. The heaps of praise and endorsement are to be expected, but there are some substantial claims made before a reader has even got to the first official page. Arcudi takes great pains to insinuate (if not downright tell us) what we should think of the book before judging for ourselves. By the finale of this version of Moby Dick it seems obvious he was off the mark on a couple things. As the introduction is the first thing read, it proves to be a slight turn off going in, while also setting the bar a little higher than appropriate. The expectations set are not entirely met.

The minimalist artistic style of Chaboute has its merits, but at times one can’t help but think that Moby Dick deserved more, maybe even simply some needed shades of grey. The sheer black and white lacks depth after a while, something that Melville’s original book had plenty of.

Also, someone needs to educate Chaboute in a more nuanced use of the exclamation point. Practically every sentence of dialogue (and it’s almost all dialogue) ends in an exclamation point, giving the impression that all characters are constantly raising their voices, even when they’re clearly not. It seems a trifling complaint at first, but becomes increasingly annoying as the pages wear on, soon establishing a monotonous feeling of forced volume throughout the novel. This overuse feels a bit childish, akin to a cheap comic book, a detraction that could have been easily rectified before publication.

Despite these setbacks, Chaboute’s adaptation is well worth the time of any fan of Herman Melville’s definitive classic. In the hands of this artist, the graphic novel proves a compelling vehicle for a retelling of one of the world’s greatest stories. In fact, it is one we can all get on board.