The Mitford Affair: A Novel 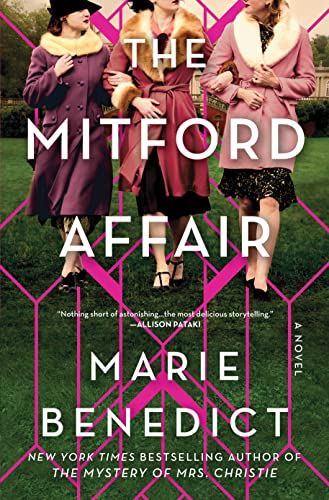 The Mitford Affair, an historical novel, begins in July 1932 and follows the aristocratic Mitford family through April 1941, as Britain recovers from World War I and reluctantly plunges into World War II.

Three of the six sisters are featured in consecutive narratives: Nancy, the successful novelist and oldest (almost 30); Diana, the glamorous, beautiful wife of the heir to the Guinness fortune, who becomes enamored with Sir Oswald Mosley, the leader of the British Union of Fascists; and Unity, an awkward young woman, who adulates Adolf Hitler. We first meet these sisters at a ball to introduce Unity to society, though she confesses bringing her pet rat to the event would have made her happier. (Unity’s love of her pet and the rat-like Hitler provides a tempting parallel.)

“Politics was intensely personal,” as author Marie Benedict writes about the Mitfords. Diana falls under the sway of fascism and the self-centered Oswald Mosley, divorcing her husband and using her considerable talents and prestige to back him and his cause, and Unity travels to Germany and stalks Hitler until she crashes his inner circle.

Both sisters spend time in Germany and become closely involved with Hitler, believing that the Führer will peacefully conquer Britain to their country’s betterment, even though their fanaticism verges on treason. Nancy, who is opposed to their beliefs, must balance loyalty to her siblings against loyalty toward her country. Thus, two sisters follow the autocratic men who inspire them, absorbing their politics, while Nancy navigates the choppy familial waters, discussing her dilemma with Winston Churchill, whose wife is her cousin.

As Germany ramps up its war effort, the divisions between Nancy and her sisters deepen, with her parents siding with the two sisters. One major theme of the novel is how two sophisticated, intelligent women—and to a lesser extent Nancy—are willing to dim their own considerable bright lights in favor of supporting their men (Nancy marries an alcoholic philanderer and keeps him afloat through her writing).

Did the charismatic power of Hitler and Mosley attract Unity and Diana, even though these men were narcissistic? In Unity’s case, her poor self-image may have attracted her to Hitler as a form of psychological compensation, much in the way monomaniacs affix their devotions to someone perceived as superior with the unconscious goal of absorbing their positive attributes. By contrast, however, Diana is confident and assured, as is Nancy, so was their behavior a product of social upbringing at a time when women were relegated to the role of helpmates?

These questions hover over the novel and are perhaps the reason Benedict was fascinated by the Mitfords. She admits that Unity’s chapters were the most challenging to write because it was difficult to understand Unity’s “attraction to a politician as odious and evil as Hitler.” By her own account, the author specializes in “excavating from the past the most important and fascinating women in history,” so the Mitfords, who are intimately entwined in this chaotic era, are worthwhile subjects.

In the author’s note, Benedict warns of the similarities between the decade covered in the novel and the rise of autocratic leaders and right-wing politics today. The divisions in Britain then, between the pro-fascists and those who feared Nazi power, are eerily comparable to the current polarization between anti-democratic groups and citizens anxious to preserve democracy. The book serves as a timely warning about how people can fall under the spell of an autocrat due to lives damaged by poverty, religious and social intolerance, grievance, and powerlessness and how this toxic soil can grow hatred, prejudice, and eventually violence.

The chapters told by Nancy, Diana, and Unity provide the reader with angled perspectives, especially by Nancy, whose narration is in first person and the most dominant. In a perfectly encapsulated portrait, she writes about Diana: “Once she becomes the inscrutable Sphinx, I know her reason is buried away like a mummy, and any effort I make will only serve to shovel more sand on top.” While Benedict has created three memorable voices, the most disquieting depiction is of Hitler, who—as seen through Unity and Diana’s eyes—is the model of a scrupulously charming gentleman. The chilling dichotomy between his behavior with them and his maniacal aggression is a brilliant study of a sociopath.

The Mitford Affair is very readable, with short chapters, a propulsive style, and suspense skillfully rendered through the fraught individual narratives and the calamitous events unfolding in Germany and Britain. Although most readers will be historically knowledgeable about the big picture, experiencing the cascading disaster from the intimate viewpoints of three women creates a mood of ominous anticipation. Benedict has extensively researched this tumultuous period and has also employed a novelist’s talent for telling a captivating story.

Laury A. Egan is the author of young adult and adult novels in a range of genres, including, literary, comedy, and literary suspense. Four volumes of poetry have been published in limited edition. Her short stories and poetry have appeared in 85 literary journals and several anthologies.