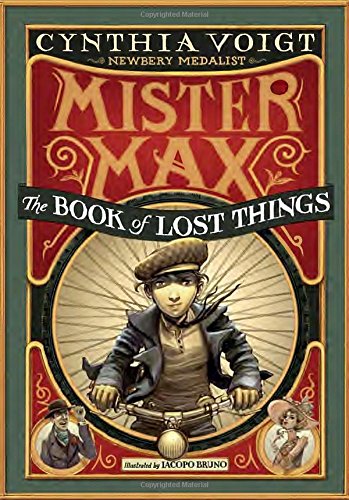 Cynthia Voigt’s first book in a three-book series Mister Max: The Book of Lost Things is written in the same style as Lemony Snicket’s A Series of Unfortunate Events. Like the children in the Snicket series, Max Starling is an orphan. It is a book of lost things because Max feels quite lost, and his attempts to be independent result in his ability to find who he is while he helps others find something or someone.

Max is their only child, and he doesn’t seem to have any particular talent. He’s an ordinary boy who tends to blend in with the stage before him—his parents’ lifestyles. This turns out to be a valuable skill. He spends most of his time around the theatre with his parents, helping and observing.

The Starlings continually remind Max that he is getting older, and that he will have to learn to be more independent. Max doesn’t think much of the advice until his parents are invited to travel to India, and he is left behind. “Was this what it was like having an adventure? Because he was beginning to suspect that being independent on your own wasn’t as easy as being independent with parents.”

To avoid being noticed and seen as an orphan, Max uses the only skills he knows well—from the theatre—acting.

“ ‘Who . . . is . . . paying . . . you . . . your . . . wages?’
‘Lady pays,’ he answered. He concentrated on acting like Greek Jonny, one of the unsuccessful suitors in Adorable Arabella.
Then she did look at him, not pleased. ‘Do you speak our language?’
Max nodded. ‘Speak good.’
There, she reached a hand out behind her to find the latch, but before she slipped through the gate she said, ‘Let me tell you something, Mister. I’m going to talk to someone about you. How you act around here, as if you own the place. What’s your name?’
‘Name Mister,’ Max said, and now he glared at her until she had backed through the gate and let it close after her.”

Max also has to find work, so he can earn enough money to take care of himself. Max’s grandmother, a librarian, doesn’t have the financial means to care for him. Despite Max’s efforts, he is unable to find work—until one day the work suddenly finds him.

Max finds a toddler, a dog, missing magazines from the library, a spoon, and just a touch of humility within an unexpected character in the book. Various friends along the way also help Max find himself. He becomes known around the town as a skilled detective and a great problem solver.

But he still has not solved the mystery of his parents’ whereabouts. Was his abandonment planned? Are his parents in trouble? A newspaper article suggests that there is trouble for someone. And so the mystery continues. How long will Max need to earn his living? How long can he safely be independent and undetected?

Readers will enjoy following Max’s adventures, laughing about mistaken identities and perceptions, and reading the next book to find out what happens.