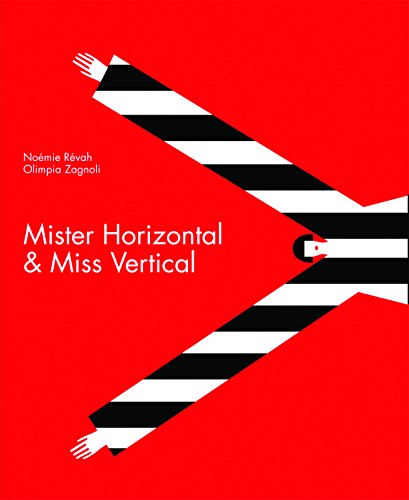 "Unusual graphics and primary colors combine with an interesting premise and a sweet ending . . ."

Mister Horizontal is a graphically rendered man with a shirt of horizontal black and white stripes. Miss Vertical is a female figure wearing a top of black and white vertical stripes. And thus begins their foray into the world.

Mister Horizontal "loves everything that glides," as well as "water-skiing and boating, and always looks out at the horizon while floating on the waves."

Miss Vertical "loves launching hersekf into orbiut and looping through the air."

In other words, every action or behavior that begins horizontally falls into his purview, while she goes up, up, up.

The text itself is uninspired, as just a list of preferences, one followed by the next. But all the graphics are presented in such a way as to offer a unique perspective, often deceivingly simple, as in the page in which Mister Horizontal is on a boat on the sea approaching an island and the entire illustration is composed of seven shapes and three colors (back, white, blue). A particularly jubilant spread goes as follows: "She loves New York, the city of skyscrapers. She would make a great firefighter or window washer." Here, three colors (black, white, red) show a red nighttime sky, black buildings, and white in the windows and on her shirt. An unusual way to present the New York City skyline.

The use of heavy matte paper including a book jacket of thick stock and large font combined with the spare colors and simple graphic shapes makes for a book that is likely to find its way to museum shop shelves and libraries.

And while the ending, which I cannot reveal for fear of spoiling the surprise, is sweet, a bit more verve to the text would have made this an outstanding picture book as opposed to a merely unique visual offering.