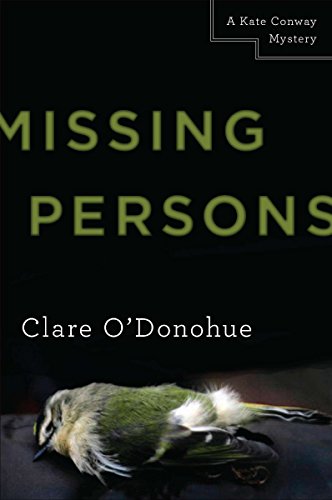 “Clare O’Donohue writes in a clear, strong voice with a style that flows from one page to the next as she expertly lays out the mystery and deftly keeps the reader guessing.”

Kate Conway produces two true-crime TV shows: “Caught!,” which begins with the re-enactment of a crime, continues with the investigation, and ends with the criminal in custody; and, a new show, “Missing Persons,” which in theory profiles missing person cases in an attempt to help solve the mystery—but in actuality capitalizes on the pain of others for ratings.

Kate has her job down pat and knows just how to manipulate people and her surroundings to create ratings gold every time—although she has the decency to feel dirty doing it—but, since her divorce started, Kate’s need for money overrules the satisfaction of a clear conscience.

Kate and Frank were high school sweethearts. For Kate, Frank’s struggling artist persona was very romantic back in the day, but 20 years later it basically amounts to a stay-at-home husband who contributes little to the marriage or the finances. But Kate’s world turns upside down when Frank announces he is leaving her for another woman: a grocery store heiress named Vera.

When Frank suddenly turns up dead, Kate’s life begins to imitate her work when she and Vera become suspects in what is being ruled a homicide. Now Kate and her husband’s mistress are caught in an awkward situation turned bad, and Vera, making an effort to keep Frank’s memory alive, has insinuated herself into Kate’s daily life.

Reluctantly working with Vera to sort out Frank’s possessions, the two women begin forging an unlikely—and for Kate, an unwanted—friendship. As Vera finds new excuses to contact Kate, Kate tries to determine if the mousy-but-likeable Vera could actually be a killer.

Through talks with Frank’s best friend Neal, Kate learns that two weeks before he died Frank put a stop to the divorce proceedings and, despite being engaged to Vera, was considering going back to Kate—which gives Vera motive; however, being the beneficiary of a $250,000 life insurance policy points the finger squarely back at Kate.

Not long after the first episode of “Missing Persons” begins filming, Kate starts receiving veiled threats that get increasingly disturbing. Now Kate has to determine if the threats are related to the “Missing Persons” case she’s working on or if there’s more to the mild-mannered Vera than meets the eye.

The first book in Clare O’Donohue’s new series is very entertaining and introduces a fun new protagonist in Kate Conway. Kate’s character is very smart, snarky and likable. She doesn’t set out to be a detective, but her years of doing true crime television has given her a sixth sense and her personable personality—albeit phony—puts people at ease, allowing her to manipulate them without them realizing it; however, the best part about Kate is that although she has to be devious to do her job right, she does have a conscience.

Clare O’Donohue writes in a clear, strong voice with a style that flows from one page to the next as she expertly lays out the mystery and deftly keeps the reader guessing. Ms. O’Donohue’s successful Someday Quilt series just got some serious competition.