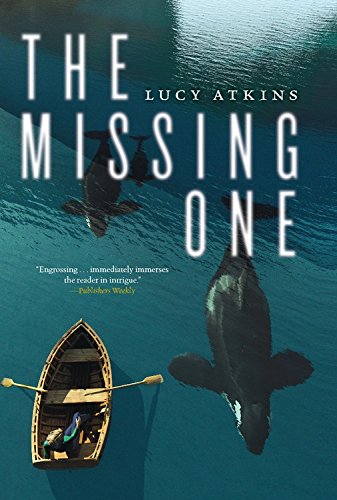 “astoundingly direct, thrilling, and well-written. If there’s any justice in the publishing world, this should be an award contender.”

“It is surprising how clear things become when you step outside your boundaries.”

Boundaries are not in short supply in Lucy Atkins’ debut novel, The Missing One, and at first protagonist Kali MacKenzie finds herself strangled by them.

Following the death of her emotionally distant mother, Kali is shattered. She suspects her marriage is failing, her work life is a mess, and she fears that she is not successful as a mother to her 17-month-old son, Finn. Since childhood, she has been expected to deal with her problems alone, but this time Kali is bereft and in need of answers: Why was her sister favored? Why was her father unavailable, both emotionally and physically? Maybe most importantly, who was her mother?

A swiftly moving cancer has robbed Kali of the chance to ask her questions of her mother, Elena, so it seems a lifeline when she discovers a stash of postcards in her mother’s desk, each from the same mystery woman, and each dated exactly one year apart for 38 years, posted from Canada to their family home in Britain.

What follows is a story of one woman’s boundary stretching (and sometimes breaking) search for answers about her past, escape from her current problem of what to do about her husband’s perceived infidelity, and Kali’s desire to create a stable future for her son.

Lucy Atkins is an accomplished writer, and this is a beautiful novel, despite its being the writer’s debut. As an exploration of how the past shapes who a person becomes and how that influences those around them, it is hard to surpass The Missing One.

The structure of this novel is important. Written in alternating voices, each point of view is perfect in imparting the message to be found in each woman’s journey of discovery: Elena’s story is written in past tense, third person point of view, and through this the reader gets a sense of the distance Kali must have felt throughout her life. Elena is analytical, cool even when events are shocking, distant. Her story is clearly set in the past.

Kali’s journey, by way of contrast, is both in first person and present tense. This lends urgency to her story, a sense that she is a woman in flux. Neither as cool nor as detached as her mother, she is tormented by doubt throughout the story.

The juxtaposition of the stories emphasizes how much who Elena was, as woman and mother, influenced the woman and mother her daughter became: Kali is constantly reminding herself that she has to be strong, even as she defends her mothering skills. Bravado mixed with fear creates a statement like, “. . . now I know that motherhood is largely about damage limitation and survival tactics,” when Kali is clearly struggling most of the time. This alone will be familiar to readers, many of whom are juggling parenting and life and worry that they’re lacking at both.

Atkins has a lovely grasp of character throughout The Missing One. Even characters with bit parts, such as Kali’s father, sister, and husband, are complete individuals, easy to visualize, and sympathetic. Kali, Elena, and the mystery woman from Elena’s past, Susannah, are well rounded (if terrifying, in Susannah’s case).

The Missing One, aside from it’s thriller aspects as Kali discovers a mother whose early life she never knew and couldn’t have imagined, is also a story of family and what it takes to successfully navigate familial waters. Through the device of discussing orcas and orca family structures, which Kali was shocked to discover was Elena’s life work, the idea of mother as source of family is reinforced. Orca pods are matriarchal, as Susannah instructs Kali: “In some ways, they aren’t too different from us: it’s all about mom for them, too.”

This theme runs throughout the book. Elena had no mother from age 8—killed by her abusive, drunken father. Susannah’s mother is a ghostly presence, barely mentioned except to say that she was in prison and Susannah raised her siblings. Kali, of course, had distant Elena. All of the women are shaped by their pasts.

There is a strong theme of environmentalism contained in The Missing One, one that will be familiar to those who have seen the recent documentary Blackfish, and the twists Elena’s story takes stop just short of unbelievable. But it is the final pages that are shattering, possibly leaving the reader forlorn.

The Missing One is a powerful story of love, loss, and motherhood, laced with a broad streak of environmentalism. As a first novel, it’s astoundingly direct, thrilling, and well-written. If there’s any justice in the publishing world, this should be an award contender.