The Missing Ingredient: The Curious Role of Time in Food and Flavor 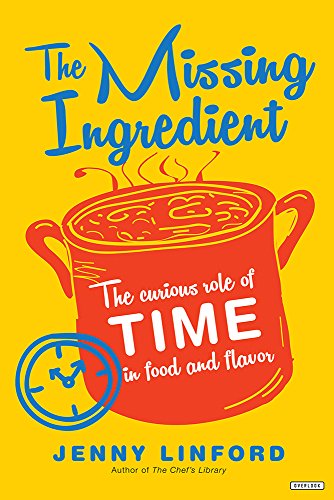 For most of us, time in the kitchen is either too short or too long. Then there is the question of timing: is the meat/fish overcooked or undercooked? Did the rice burn? Is everything ready to put on the table at the same time, or will the main dish be getting cold while the vegetables are still cooking?

Time, in other words, is something we are forced to work with in the kitchen. It can be both friend and foe. And, like death and taxes, we cannot escape it.

In her new book, The Missing Ingredient, seasoned British food writer Jenny Linford goes beyond our day-to-day experiences with time in the kitchen and provides readers with a deeper look at the role of time in food preparation. It’s an encyclopedic overview of all things culinary that is part history, part methodology, part cultural, and part science that covers everything from chocolate making to cheese making and everything in between (not to mention everything that goes on beforehand, like growing and harvesting cacao beans to raising the animals whose milk goes into the cheese).

The organizing principle in the book, of course, is time. From things that take mere seconds (the time it takes for chocolate to begin to melt in one’s mouth) to minutes, then hours, then days, weeks, moths and finally, years (like Parmagiano-Reggiano or a specialty dry-cured meat like jamón ibérico).

While the organization seems logical, it turns out to be a rather loose thread that holds the book together. Unless it is read in small chunks, it can feel both overwhelming and all over the map—and even sometimes repetitive.

Take the exploration of meat for example. In the chapter entitled Minutes, the reader will learn about the minutes it takes to cook a good steak. In the same chapter the reader also learns about the importance of raising cattle that are a minimum of 36 months old before they are slaughtered allowing the meat to develop more flavor.

Steak is further explored in the Weeks chapter where we learn about the process of hanging meat to dry age and develop even more flavor. And then it’s back again to (British) cattle raising in Months to re-visit the notion of months to slaughter in order to maximize flavor.

Subjects can also feel shoehorned into certain sections. For example, the subject of corn is included in Days where we learn about the different types of corn that are grown that originated in the Americas (and take months to mature in the field) that are used in preparations that take anywhere from minutes (freshly boiled corn on the cob, polenta, or popcorn) to days for tortillas or corn bread made from freshly harvested corn.

Still, The Missing Ingredient is thoroughly researched with plenty of fascinating food revelations for the curious cook to enjoy. For example, eating fresh (or “immature” as the author calls them) peas and beans instead of the dried variety—as in legumes, or “pulses” as they are called in the U.K.—has a completely different nutritional profile because the immature beans “haven’t gone through the process of converting [sugars] into starches and the protein content hasn’t been developed.”

Or the thoroughly fascinating biological reason for our food memories, most famously described by the author Marcel Proust while eating a madeleine. “Our ability to taste flavours in food draws on our sense of smell,” writes Ms. Linford. “Significantly, the olfactory nerves, which process aroma messages, connect to the amygdalae, areas of our brain that are involved in our emotional responses, including pleasure, fear and anger. The amygdalae are part of the limbic system of nerves and networks in the brain that control emotions and drives, found close to the hippocampus, which plays an important part in creating memories from experiences.”

In many ways, as it turns out, time is the common ingredient, rather than the missing ingredient in all our culinary adventures. As such, it is something worthy of consideration and contemplation.

“It is the time you have wasted for your rose that makes the rose so important,” wrote Antoine de Saint-Exupery in The Little Prince. Substitute “food” for “rose” and your next meal will take on new meaning.