Miss Entropia and the Adam Bomb 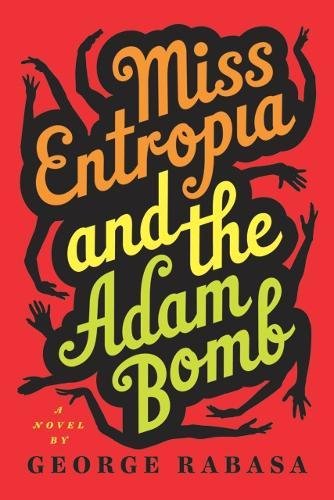 Adam Webb is a teenager bouncing in and out of the Institute Louiseaux, a psychiatric institution. He is well read and observant, but prone to obsessive-compulsive behaviors, righteous Marxist-veganism, and transvestite flourishes. He’s a sympathetic character who loves his family and is driven to excess mostly by his all-consuming love for Francine “Pia” Haggard.

Francine Haggard is also a likable, intelligent, and crazy teen—an ungovernable pyromaniac. George Rabasa’s second novel, Miss Entropia and the Adam Bomb, is the resulting dark comedy of the ill-fated romance of Adam and Pia.

Set in Minnesota, Miss Entropia and the Adam Bomb unfolds as a sort of journal written by Adam. Using an insane narrator to tell a story from a partisan viewpoint is a fine narrative device. It was most famously exploited by Ken Kesey in One Flew Over the Cukoo’s Nest, and more recently employed smartly by Sherman Alexie (Flight) and Thomas Rayfiel (Time Among the Dead). Adam’s narration has the slacker chic of an intelligent, idle teen with a lot of time to consider the foibles of others. Readers are treated to dozens of droll observations through the eyes of a troubled young man. Mr. Rabasa clearly enjoyed himself while writing this book; Adam is his imp, wreaking mischief on the world.

Further, Mr. Rabasa uses Adam’s family as an Addam’s Family (please forgive the pun), with each family member an archetype. For example, Mr. Rabasa uses Adam’s cousin, Iris, to skewer Bible Thumpers. Mr. Rabasa uses Adam’s mother to send up “Minnesota nice;” Mom even shows good cheer as Adam drugs her and her family. Adam’s father, the pseudo-intellectual, is always sad about the killing going on somewhere in the world. Adam’s jock older brother, Ted, is acne-covered in the first half of the book and physically pummeled in the second.

But the centerpiece of the book is Adam’s relationship with Pia, and it is here that Mr. Rabasa (through Adam) writes with whimsy and flair. According to Adam, Pia draws inspiration from the “Thelma and Louise Cookbook.” After guiding Adam through his first sexual encounter, Pia tells Adam to look away, because “you looks like you’re having a seizure.” Later, Adam attempts to menace his shrink by channeling Pia:

Some people are not meant to fit into the world, but to make the world fit us. We are sane only when we embrace our weirdness. When we refuse to be straightened out, the world bends by small degrees in our direction.

All of which brings us back to the insane narrator, Adam. When reading a book written by an insane person using the book to explain a bad outcome (won’t spoil the plot by saying more), readers are challenged to disbelieve the narrator. Mr. Rabasa does a fine job leading readers to conclude that sweet Adam has more complex motivations than trying to keep temperamental Pia happy and safe. Maybe Adam is less naïve and less generous than his narrative suggests. Maybe Adam’s affection for Pia is other than a healthy crush.

The book jacket suggests that Miss Entropia and the Adam Bomb is an “unbalanced Romeo and Juliet.” But Adam is more like the complicated Prince Hamlet than the innocent Romeo. Perhaps the entire Shakespeare metaphor is off; Miss Entropia and the Adam Bomb may be more in keeping with contemporary comic epics like John Kennedy Toole’s Confederacy of Dunces and Tristan Egolf’s Lord of the Barnyard—with a splash of Kesey’s Cukoo’s Nest.

Miss Entropia and the Adam Bomb is a very modern and clever book.