Miss Anne in Harlem: The White Women of the Black Renaissance 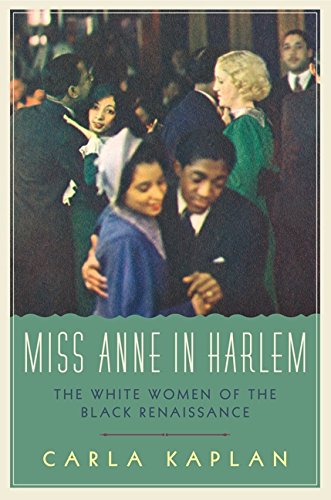 America’s Jazz Age and the Harlem Renaissance have always been somewhat mysterious chapters in American history.

Despite what we’ve learned about the place and its contributions to music, literature, and art much remains elusive and intriguing. Even for people who lived in New York City between the 1920s and 1960s when going up to Harlem was seductive and daring, one never knew exactly what went on beyond 125th Street.

Now comes the story of a group of women very few have ever heard of despite their impact in Harlem and beyond.

Called collectively “Miss Anne” by blacks in Harlem, these women were (usually well-heeled) white women who embraced blackness in ways that were shocking in their own time, whether through philanthropy, inter-marriage, or artistic endeavor, and whose stories some will still find stunning.

We have Carla Kaplan to thank for bringing them to us in so lively and vivid a manner.

“Miss Anne took the idea that identity could be willful affiliation, a process of choice rather than a byproduct of biology, further than almost any other figure in the previous century,” Ms. Kaplan explains.

“Through her and her struggles for acceptance in Harlem, we can confront our own ideas about where we do—and do not—belong. Miss Anne’s questions are as pressing now as they were almost a hundred years ago: Can we alter our identities at will, and if so, how? What, if anything, do we owe to those with whom we are categorized? Does freedom mean escaping our social categories or inhabiting those that don’t seem to belong to us?”

Those are heady and difficult questions to ponder, and it is to Ms. Kaplan’s credit that we want to take them on with the help of the six amazing women whose stories she shares.

Among those women are shipping heiress Nancy Cunard, perhaps the most fascinating of them all, and Charlotte Osgood Mason, a philanthropist and the least likeable, most psychologically challenging character in the book. Between these two iconic figures are novelist Fannie Hurst, Barnard College founder Annie Nathan Meyer, educator Lillian E. Wood, and heiress/writer Josephine Cogdell Schuyler—all fascinating in their own right.

These white women were hugely important in creating a Harlem Renaissance that goes beyond the arts; yet until now they were little known. Ms. Kaplan’s vigorous research, combined with her excellent narrative voice, bring them to us in ways that inform and educate while entertaining readers with a particular interest in American history, women’s studies, African American history and literature, and race relations.

Often viewed with suspicion and contempt, the Miss Annes were patrons of the arts, friends, lovers, and in some cases wives in Harlem.

One was a beloved teacher in Tennessee but her life resonates with her Harlem sisters. Ms. Kaplan captures the essence of the six she chose to write about so that we come to understand not only their individual contributions, intentions, and significance, but also the much larger cultural shift taking place in America at a time when race relations were tenuous at best.

Interweaving their stories into the larger tapestry of black-white politics, black-black politics, white-white politics, and a rapidly changing social and political landscape that affected both races in dramatic ways, Ms. Kaplan has given us an important opportunity to explore the very notion of race as a possible social construct while also exploring a time when new feminist paradigms and identities were emerging.

Early chapters in the book help to establish the wider framework in which we come to know the six women featured and to understand what drew them (with one exception) to Harlem.

The Introduction explains Miss Anne’s motives and aspirations while “Black and White Identity Politics” guides readers through race relations in the early part of the 20th century. “An Erotics of Race” reveals the pull of Harlem and its inhabitants for Miss Anne. In the end we come to admire the pioneering women who gave so much to an era and its aftermath, even if we don’t always like their characters or deeds.

Summarizing Miss Annes in her epilogue, Ms. Kaplan writes, “Refusing to follow the rules, [Miss Anne] risked her womanhood, discovering that society can proffer or withhold [approval] at will. But Miss Anne could not help it; she led with her passions. She was committed to fair play. But she was also self-interested. Her rule-breaking was designed, in part, to help her fashion a more exciting life. This makes her a messy role model for identifying with others.”

Yes. But who can fail to admire women with such courage and fortitude? In sharing these women and their times, Carla Kaplan has given us and history a great gift. Like the Miss Annes she writes about, we have much to thank her for.