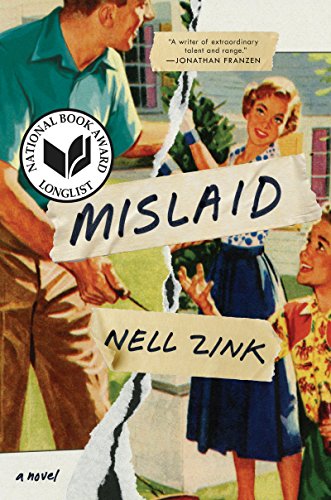 Looking for a brainy yet breezy novel that addresses gender, race, and class issues with levity and has a happy ending? Try Nell Zink’s Mislaid, her second published novel following her critically well-received debut The Wallcreeper in 2014.

Readers who enjoyed The Wallcreeper, however, will not necessarily enjoy Mislaid, whose third person narration is not as concise, brisk, or intense as its predecessor’s first-person narration, though it is more discursive and intentionally more accessible. Neither book is her first attempt at fiction writing.

California born and Virginia raised Zink’s first writing mentor was Israeli postmodernist writer Avner Shats whom she met while she was living in Tel Aviv and who was the sole reader of her early unpublished novels. More recently she met American writer Jonathan Franzen through a shared interest in ornithology and wrote The Wallcreeper to prove to him she could write for more than an audience of one.

When Franzen then dared her to write something commercially sellable she wrote Mislaid, which Franzen’s agent sold to Ecco, an imprint of Harper Collins, for a six-figure advance. By then Zink had already placed The Wallcreeper with feminist indie press Dorothy, a Publishing Project. Her discovery in her fifties is a kind of mid-life Cinderella story.

Mislaid begins in 1965 with 17-year-old lesbian debutante and high-school senior Peggy Vaillancourt, whose parents had vetoed her plan to enlist in the army as a man, deciding on the advice of her high-school gym teacher to attend single sex Stillwater College on stagnant and artificial Stillwater Lake near Petersburg, Virginia, where she is seduced by her gay male poetry professor Lee Fleming who finds her boyish figure attractive. The affair results in pregnancy, marriage, and Peggy, who had hoped to eventually become a feminist playwright and move to New York, dropping out to become a full-time mom and faculty wife. The novel’s title is a pun with several meanings.

The couple’s first born is a son named Byrdie, and five years later they have a daughter, Mireille, whom they nickname Mickey. Lee has been sexually unfaithful from the start of the marriage, but when he falls in love with a woman his wife had hoped to bed Peggy’s livid action in reaction makes her fear that Lee will have her committed to a mental hospital never to see either of their children again.

When nine-year-old Byrdie is too attached to his father to join her, Peggy abandons him, calls herself Meg, and takes her three-year-old blue-eyed blond daughter whom she renames Karen Brown from the birth certificate of a recently deceased black girl three years her senior to live as African Americans first in an abandoned house and later in a housing project in an impoverished part of southeast Virginia where Lee, the cash poor descendant of that state’s aristocracy, won’t find her. Zink thus places Peggy/Meg even farther from her New York dream, potentially puts her and Karen in harm’s way, and risks turning her narrative into the literary equivalent of blackface minstrelsy.

Caucasians like Meg and Karen can pass as African Americans thanks, ironically, to the one drop rule and the white supremacy that created it, which encouraged thousands of light complected African Americans to pass as white. Ensuing intermarriages over the generations resulted in a significant percentage of supposedly white southerners having African ancestry.

So although Mickey/Karen is a blue-eyed blond her lips are full, her small nose is wide, and her false birth certificate says she is black which none of her neighbors, teachers, librarians, or school administrators question, and as an intellectually gifted child she can skip a few grades to match the date on her birth certificate.

When Meg exhausts her savings, Native American illicit drug kingpin and spirituality enthusiast Lomax Hunter takes her under his wing and she becomes a dealer, though she must continue to appear poor so as not to attract the attention of law enforcement or the Flemings' private detectives. After leaving her marriage and her son to avoid being committed to a mental hospital, she now commits felonies that risk incarceration and the loss of custody of her daughter.

Dee, a college educated neighbor, befriends Meg, and Dee’s bookish son Temple and Karen become best friends and in their teen years girlfriend/boyfriend. The narrative alternates between Meg and Karen Brown’s story and that of Lee and Byrdie Fleming; in the middle chapters the pace slows somewhat, and instead of using that relatively calm interval to delve deeper Zink tells where she might have shown and summarizes characters where she might have developed them, albeit in handsome occasionally erudite prose.

Readers can guess the plot is heading toward a family reunion when Karen and Temple are admitted as freshmen at the University of Virginia where Byrdie is a senior, though this review will not reveal how Zink brings that about. From then until the novel’s end it becomes a suspenseful page-turner, and Karen’s cheerful, naive teenage optimism is endearing if almost saccharine.

In addition to anxieties that are the result of her own actions, Peggy/Meg despairs of ever fulfilling her potential. If Mislaid doesn’t fulfill its potential it is nonetheless a funny, entertaining, lightweight highbrow novel perhaps best read in a single afternoon under a beach umbrella.