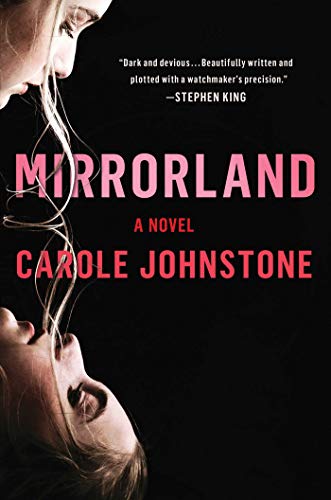 Twin sisters, once extremely close when growing up in an eccentric household with a demeaning and scolding mother, alcoholic grandfather, and absent father, are now separated by thousands of miles and endless anger.

Cat lives in Los Angeles in an apartment overlooking the water. But it’s not hers, and she’ll have to move soon when the owner returns. A lifestyle writer, her finances are precarious, and she’s unsure of what she’ll do next when she gets a call from Edinburgh, Scotland. El, her twin, has failed to return from a solo sailing trip.

El is much more stable—at least on the surface. An artist, she’s married to Ross and living in the grand but uber Gothic home where the twins grew up—a place they called Mirrorland. It’s all dark passageways, closed off dusty rooms, hidden cupboards, nooks, and cobweb filled crannies. Here the two invented an alternate universe of hovering evil, wicked clowns, a ghoulish Tooth Fairy, and blood thirsty pirates all populating their elaborate stories that had them plotting their survival in a hostile and shadowy world. Not for them were the typical indulgences of young girls such as soccer or hosting tea parties with their favorite stuffed animals. It was not in any way an idyllic childhood.

It’s been almost 20 years since Cat was last home, but much is the same. Memories tug at her as she wanders through the darkened rooms of her old home, and she at times feels catapulted back into feelings of being haunted and hunted. But there are new problems to face as well. As the days go by and neither El nor her boat are found, the police give her up as lost at sea. But Cat believes she is still alive and continuing one of the many games they played when young. How else to explain the clues she keeps finding, ones that would only mean something to the two of them?

Cat is an unreliable narrator—she drinks way too much, and she keeps slipping into the past, but whether that past is what really happened long ago, one of the many convoluted stories the sisters made up in Mirrorland, her own perceptions of what was happening around her back then, or a combination of all three, it’s hard to tell.

Also in the house, El’s husband Ross waits for news as well. Here, too, are complications. We learn quickly that Cat was—and still is—in love with Ross, but how she lost him to her sister takes longer to unfold. She receives emails—from El, she is sure—that lead her to places where she discovers torn pages from El’s diary. Someone else is leaving warning notes, telling Cat she’s in danger and insinuating that Ross is not to be trusted—that he harmed El and possibly killed her. That warning though may have come too late because Cat and Ross have rekindled their old romance.

It’s easy to enter Cat’s world, to feel the burden of being watched by unseen eyes and experience her fear as she struggles to determine whether El’s really dead, and who, if anyone, she can trust. And, of course, as readers we wonder if we can trust her.

Jane Simon Ammeson is the author of 14 books including Hauntings of the Underground Railroad: Ghosts of the Midwest.